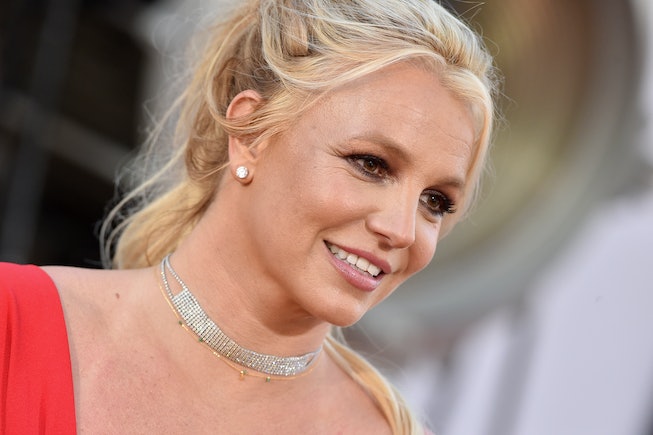 Over time, Britney Spears has made wispy side bangs part of her go-to beauty routine. Although she's changed up the look and even color of her hair in the past, the pop star has been frequently spotted with fringe. However, as she shared in an Instagram post on May 18, there's a heartbreaking reason that Spears was often hesitant to go without bangs.

Spears began her confessional post by remarking on the ability of bangs to make you look younger. She then took a look back, sharing a story from her childhood. "I stopped having bangs in the 3rd grade and I remember like it was yesterday," she wrote in the caption. "It was such a big deal to expose my forehead …. only pretty people in the south could do that and I never felt pretty enough to pull it off."

Continuing, Spears said that as a child, she felt like she was an ugly duckling, and she took a cue from some of the older girls she looked up to, trying to go without bangs. "I did and it looked sooooo bad but I thought I was gorgeous," she wrote. "I think I knew it didn’t look good but I did it because I thought it made me cool .... and I’ve pretty much had it like that ever since !!!!"

The pop star explained how she views bangs currently, saying, "People choose different ways to protect themselves …. when I pull my bangs in front of my head I feel like I’m protected ... almost like I’m in 3rd grade again."

A return to bangs for Spears comes after previous selfies had the singer wearing long hair with a side fringe. Although she previously didn't wear her bangs directly down and above her eyebrows, her recent looks have included hints of a side bang.

The post has resulted in positive feedback from fans, including one commentator that crowned her the "queen of bangs." Others thanked her for the post, writing, "You are a self-confidence role model" and "Love when you share pieces of you! We Stan a humble queen! You beautiful human."