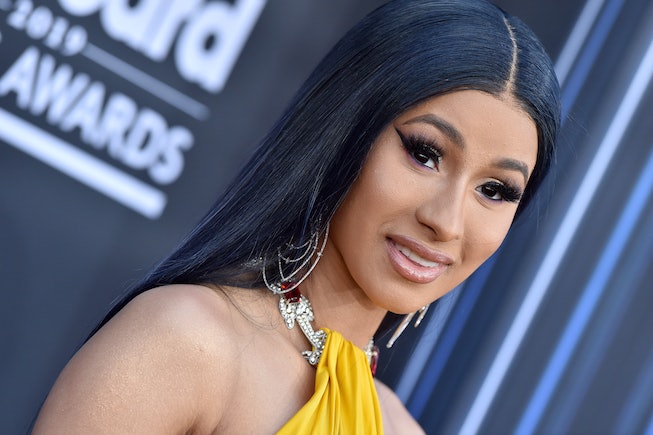 There appears to be truly no end to Cardi B's beauty experiments. After debuting two new tattoos, multiple changes in hair, and sharing an extensive DIY hair mask recipe in just the last few weeks alone, the rapper continues to pack her days with Instagram-worthy glam. For her latest social media spectacle, Cardi B chronicled getting four new body piercings, a 2 a.m. taco break, and a continued call for an end to police brutality in one night.

A mere one day after unveiling a rework of her 10-year-old peacock tattoo, and Cardi B continued making changes, adding a straight line of piercings to her upper body. Sharing the entire process with Instagram — including her cringes and struggles with pain — the rapper captured as she got four small piercings that ran from under her lip to the center of her chest.

Holding Offset's hand throughout the process, Cardi shared every step, including a post-piercing video that captured her showing off tiny new jewels. Admitting that "this b*tch hurt" with her Instagram followers, Cardi B made it through, despite the occasional scream.

Sharing a number of selfies via Instagram Story, Cardi B wasn't about to end her evening on social media with a final look at her jewelry. She later shared photos of a taco feast, and then, ended her night with a reminder to the Louisville Police. "Don't get it twisted...Louisville Police Department I'm still on yo *ss," she wrote. "Justice for Breonna Taylor."