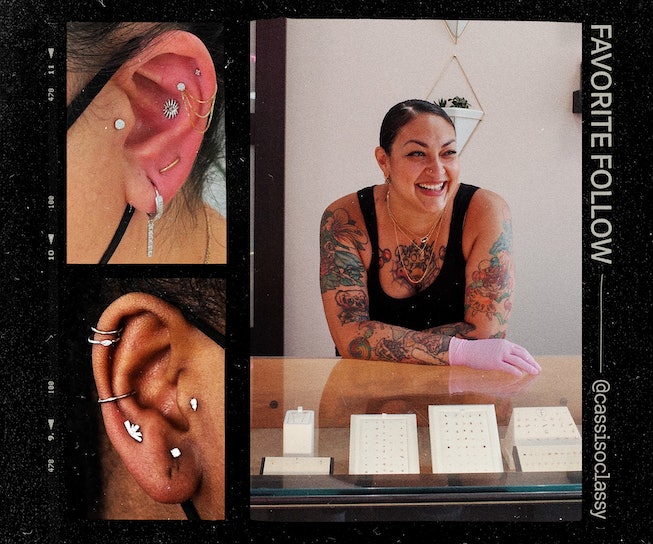 So Gold Studios, the luxury piercing studio in Brooklyn, is perpetually booked — unless you’re quick to grab an appointment at 10 a.m. on the 1st of each month when the schedule opens. For those who aren’t within a reasonable distance to the studio, piercer and So Gold’s founder, Cassi Lopez-March is available to the masses on TikTok. She made a name for herself on the platform by sharing beautiful, creative piercing stylings and giving helpful health and maintenance advice for just about every type of piercing you can think of.

Lopez-March was in love with piercing by the time she was in high school, and has been practicing basically ever since. “Piercing wasn't looked at as a career for a very long time, my entire life I was told that I would eventually need to get a real job,” she recalls. Her talent led her to open her successful studio in Brooklyn, and now she also makes her videos for an audience of her 1.1 million followers and growing. “It’s safe to say that’s no longer an issue!”

Nearly 20 years of piercing experience (along with her knowledge of anatomy and eye for balance) have helped make Lopez-March a standout in the space by creating unique piercing solutions for her clients’ needs and wants — that always end up looking extremely cool. “People have traveled from all over to be pierced by me and it blows my mind,” she says. “I'm truly grateful to have such amazing followers and clients that trust me with their bodies.”

Below, Cassi reflects on her TikTok fame, the recent increase of popularity in piercing, and what she predicts will be the biggest trends of 2022.

On Getting Her Start

I got my first piercing in eighth grade when I was 14 years old. My eyebrow piercing was first, and I kind of became obsessed after that. I was very much a teenage goth kid. A tattoo shop had opened up down the block from my parents’ house when I was in high school. I spent a lot of time getting pierced and hanging out there after school. Eventually, the owner offered me a job as a piercer. I had zero training but was able to get my certification through the county — regulations were very different 20 years ago. I learned a lot over the years through different piercers and had to unlearn a lot of what I thought I knew.

On Her Personal Piercings

The eyebrow piercing rejected and left me with terrible scarring, but I eventually got it again. Twice. I was dead set on trying to make it stick, and it never did. After that, I got my lip pierced. I had a regular labret piercing in the center of my lip. I had the sides of my lips done, like snake bite piercings. I had those pierced a few times. I had a Monroe piercing, on the upper lip, for like 15 years. I had a tongue piercing. I still have a septum piercing, which I've had since I was 16. I had my cheeks pierced. I had my nostrils pierced both sides at multiple different times. Ironically enough, I've only had my first holes pierced.

On Finding Her Niche On TikTok

The piercers I knew on TikTok were great, but they weren't making any sort of styling content. They were making more educational videos, which are super needed, but I feel like the styling aspect of it was heavily lacking. And I thought, "You know what? Let's show people that piercings can be so much more than just a couple of titanium balls and some steel rings, and it can actually be pretty.” People are always showing their clothing on TikTok, I thought this could be done with piercing, too.

I went to school for journalism and marketing and I was dead set on working in the fashion industry. I did for a bit, and I hated it. I love the idea of fashion and style, but I don't want to work in that industry. When I started piercing in the city I realized that I could kind of incorporate fashion and piecing together, so that's how I handle things when I'm styling.

On The Increased Popularity of Piercing

I think that with everyone being stuck at home constantly, people are craving some source of creativity. That’s why I started making TikTok videos to begin with. So, if I can use my work to feel creative and inspire people to want to try some jewelry and feel better about themselves, then that's awesome. Because honestly, everybody's kind of miserable and a lot of people find happiness in jewelry. Also, a lot of people find comfort in the slight pain of a piercing. I remember when I first opened back up after being shut down for four months, I would ask clients, "Of everything going on in the world right now, why are you deciding to get a piercing?" And multiple people said the same thing. They said, "I just want to feel something”.

On The Piercing Trends For 2022

Orbitals have been a hit and I don't foresee the requests for them slowing down. I go hard for an orbital, There's just so many different ways to wear them! It's funny because because when I started making these TikToks and people would be like, "Is that one ring going through two holes? What is that?" And then next thing you know, everybody and their mother wanted one, but orbitals have been around forever. They can be made very minimal, so it works for someone who has a minimal aesthetic. They can be made really like maximal too—you can add chains to them or do ones that are fully decorative in the front. They're really generally cost efficient because you have two piercings, but you just need one piece of jewelry to connect both holes.

Bright colored stones are going to have their year, as are accessories like chains, dangles, and cuffs. For the longest time everyone just wanted diamonds or clear stones. I've noticed ever since we launched our online store, anytime we get anything with emeralds, it sells out in like two seconds. Green stones — emeralds, chrysoprase, tourmaline — people go crazy for them. Rubies, too.

Accessories for piercings are huge, like chains and stone dangles and things of that nature. Anything to basically take a piercing from zero to 100 is going to be a big thing. A lot of people have a really simple look that they want to elevate but they don't want to buy a whole new piece of jewelry, and that's where these accessories come into play because you can literally add a tiny dangle or chain to your earring and it's going to give it a completely different effect.

Navel piercings are also making their comeback for sure. Mark my words! I’m doing a lot more than I ever thought that I'd be doing at this moment. There was a period where I had maybe done maybe two navel piercings a year, and I would say last year I did at least 10, which is a huge, huge increase. I feel like this year I'll probably be doing quite a bit more.

On New Attitudes Towards Navel Piercings

A lot of people don’t realize, and this comes down to fatphobia, that you don't need to be skinny to have a navel piercing. But, I feel like people are finally starting to come around to it. I would say eight out of 10 navel piercings that do nowadays are not on people who are traditionally thin and I love that. Most of what I'm doing for them is what's referred to as a floating navel piercing — and that's where instead of a big ball hanging on the bottom of the navel, it is instead would be likely a flat disc inside your navel and then you put the decorative part on top. It’s actually a fun, updated way of wearing it. People need to get over the idea that you have to have a big six millimeter gem inside of your navel to look cool. I see on TikTok, younger people get their navels pierced and they say, "Why doesn’t mine doesn't look like everyone else's?” I'm over here thinking, that doesn't mean there's anything wrong, it just means that you can get different jewelry components to have your piercing look even cooler.

On Finding Your Own Look

Even when people come in with piercings that they had done when they were 12 at Claire's or they did them by themselves and they're all wonky, misplaced piercing sometimes help you figure out the coolest setups for stylings. Sometimes you're able to do things that you wouldn't be able to do if you're doing a fresh piercing on someone. It’s like a weird, misplaced piercing is someone else's treasure.