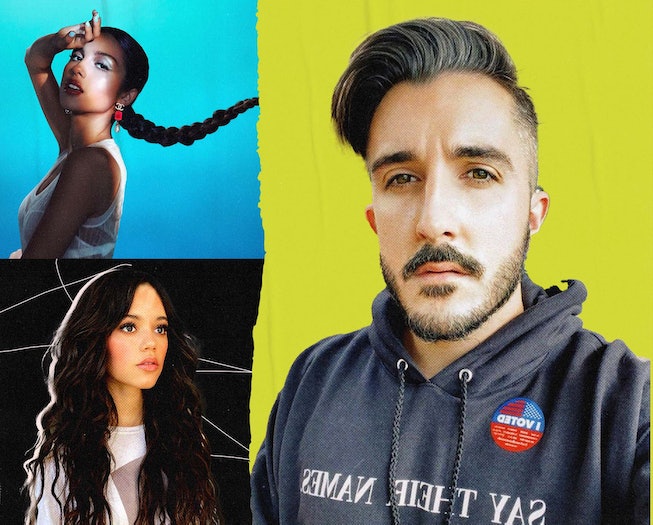 There’s perhaps no more exciting hairstylist and artist duo of 2021 than Olivia Rodrigo and Clayton Hawkins. He has been styling Rodrigo’s hair along her meteoric rise to becoming this decade’s pop queen and has been referencing pop icons of years past along the way. With the ’90s-inspired hair Hawkins styled for Rodrigo’s nostalgic Brutal music video (including space buns and clip-in party highlights), he has made a name for himself as the Y2K hair whisperer for the Gen Z set.

Born in Los Angeles, Hawkins was in his own words, “raised on Xtina videos” and is somewhat of a pop-culture trend encyclopedia. You can see his clear references to the best of the early 2000s in his work, creating new looks from classic trends like face-framing braids, spiky up-dos, and butterfly clips. He’s also a hit on TikTok, where he helpfully shares velcro roller hacks, Y2K braid tutorials, and even teaches his followers how to cut your own bangs. With 2000s styles still among the most popular trends of the year, we asked Hawkins all about his favorite ways to bring these throwback looks into everyday wear.

For fall, Hawkins is adamant that we should bring back contrasting colorful streaks. “Think Xtina Dirrty era, black, purple, or bold red streaks,” he told NYLON. “If you’re nervous to actually color your hair, invest in some single clip human hair extensions that you can color yourself or buy ones that are already dyed.” When choosing streaks, Hawkins says it’s all about color selection, recommending that you take a trip to an extension store to see the color in person.

As for other Y2K hair trends that we will be sticking with for the long hall, Hawkins predicts that braids will trend through 2022. He’s particularly partial to baby braids and pigtail braids and views now as the perfect time to experiment with more youthful styles. You don’t have to be 18 years old to pull them off, he believes. “Y2K hair was all about being bold and having fun, it wasn’t even about being flattering at times,” he says.

Hawkins himself is a fan of having fun with hair via mixing up his wigs. On TikTok he shares how he puts his wigs on and (after countless requests from followers) how he takes them off. “I wear a wig to help demonstrate my hair hacks on TikTok, but most people wanted to know how I glue it on my head before I do soft effortless beachy waves,” he says. He’s covered basically ever trend you’ve seen on the red carpet this season and makes it digestible to try at home. If you’re wondering, he has even a “wet-look hair hack” video for you.

“The world is crumbling, you might as well have fun hair,” Hawkins jokes. He also says that his current favorite hair hack is: “Cutting people some slack because this past year and a half has affected people in many different ways.” He adds: “I’ve been lucky to have had the most creative year of my life, but not everyone has been so lucky so if someone’s hair looks good, compliment them. You might make their week.”

With an experimental and positive attitude, Hawkins captures what Y2K hair was about all along—having fun. This (even he admits) can mean trying a hairstyle you may look back on and laugh about later. “As long as you’re bold and having fun, I’m not mad at any of it,” he says. There you have it, professional approval to head into fall with colorful Xtina clip-in extensions, for better or worse.