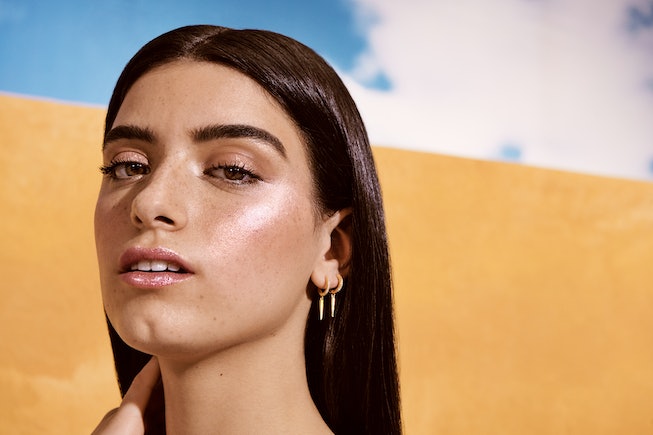 Branching out beyond her status as a certified TikTok star, Dixie D'Amelio continues to make waves in the world of beauty. After appearing as the face of Morphe's new Gen-Z collection, Morphe 2, and appearing as the new face of Dermalogica, D'Amelio teamed up with Patrick Ta for a trendy makeup routine.

Floating shapes remains a popular method of color application, showing up in manicures and eye makeup. For his latest celebrity look, Ta used the method for D'Amelio's eyeliner, placing a single black line beneath her brows. The go-to makeup artist of Kourtney Kardashian paired the floating line with a smokey eye wing, and a hint of glitter on the inner lids.

The rest of her makeup was kept very minimal and glowy, with D'Amelio sporting a nude, glossy lip, and just a touch of glow on her cheeks and face. Sharing some of the product details, Ta confirmed he used products from his makeup line, including lipstick in the shade, "She's Independent" and lip liner in "She's Proud. He also shaped her brows with clear gel.

He credited D'Amelio's bouncy waves to hairstylist Laura Polko, who shared the same image to her Instagram. In the photo, just the top of D'Amelio's outfit, styled by Mimi Cuttrell, was visible, and sharing the orange-yellow jacket on Instagram, Cuttrell wrote, "thanksgiving palette is back."

See and attempt to DIY the look, below.