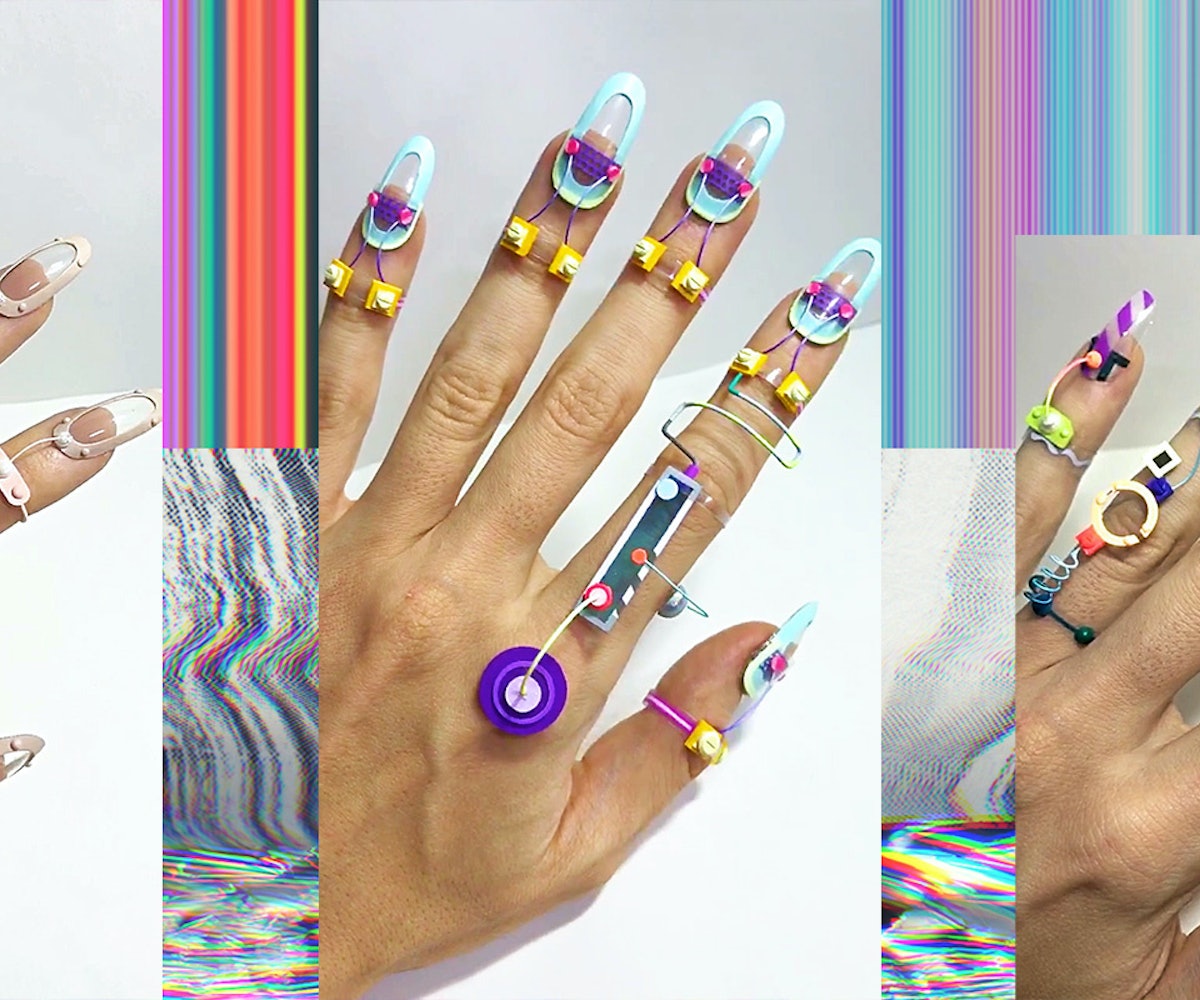 Two years ago, the Tokyo-based nail artist Eichi Matsunaga moved to New York City in pursuit of his nail art dreams. Inspired by his sister who often made nail tips from scratch as a nail artist, he studied nail art in Japan before coming overseas.

However, Matsunaga's work isn't the typical nail art you see on Instagram. Eschewing super-sized gems, crystals, or cute hand-painted designers, the artist takes a more futuristic and minimal approach to nails. Think: handmade robotic details that extend down the fingers of the wearer and look, quite frankly, like nothing else we've ever seen. He also puts a focus on hollowed-out nail tips, minimal space, and unusual color palettes, such as metallics with chalky pastels. With translucent details, metal pieces that resemble sensors and other pieces of hardware, these nails are a careful construction of art-meets-beauty.

"It took some time for me to find nail art," Matsunaga says from his New York apartment. "I always wanted to do something creative with beauty, and realized that I've always been obsessed with detailed work. Nail art was a great way for me to explore that." When he first came to New York from Tokyo, he began by doing nails for commercial clients and advertisements, but he quickly found his own niche in the city and on Instagram, where he currently has nearly 65k followers and a constant stream of comments from strangers and friends alike, all amazed at his unusual aesthetic when it comes to nails.

Matsunaga has created his signature robotic nails for the model and activism Jillian Mercado, the iconic drag queen Violet Chachki, as well as a local community of downtown New York artists and bigger clients such as Swarovski and Rodarte. He has also worked with Mandy Moore, Nicki Minaj, and Mindy Kaling.

While he may not be indulging in hand-painted techniques or crystal work very often, that doesn't mean a manicure with him doesn't take just as much time. You've likely heard of manicures (like Cardi B's) that can take up to three hours, but Matsunaga's process is next-level. He measures each client's fingertips and then begins the process, which sometimes takes up to three weeks, creating all the pieces with a 3-D printer, using a combination of artistic skill and traditional nail art techniques.

"When I was kid, I was always interested in art crafts, and I often did Origami and played with Legos," he says of his inspiration for his signature robotic nails. He created the first set of robotic nails about a year ago, after cutting nail tips, pieces of plastic, and 3-D printed material by hand and collaging them together. He also takes inspiration from his native Tokyo, where busy streets and the mix of new technology and old-world culture merge. "Akihabara in Tokyo is one of the most important places for me," he says. "It always inspires me." Matsunaga is referring to the always bustling electronics district in Tokyo, where vendors selling computer hardware mix with arcades and video game emporiums.

Matsunaga is part of a new generation of nail artists who are doing things differently in New York: creating nails that make people look twice, for their artistic approach and unusual aesthetic rather than just being "pretty" first and foremost. Artists such as Mei Kawajiri (nail artist to Bella and Gigi Hadid and many more) create intriguing hand-drawn illustrations and mini collages out of plastic gems shaped like rubber ducks and Barbie shoes, while Juan Alvear's super-long nails are shaped like abstract art sculptures and twisted unicorn horns.

But as for what's next for Matsunaga, he's continuing to look for ways that push the boundaries of what's possible—and accepted—when it comes to beauty. "The nail art industry will continue to grow," he says. "These days, there are so many artists that have so much originality and very unique styles and their own technique. I think this is proof that the industry is going to grow."