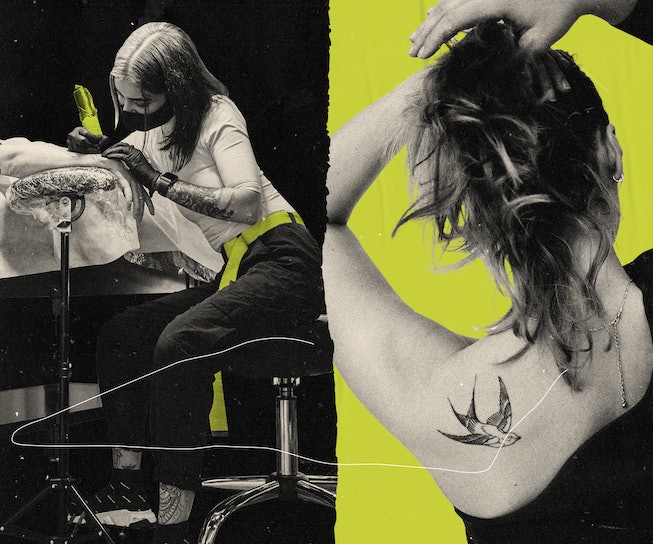 Recently, a friend asked if I was afraid of commitment. The reason? At 30 years old, my body — despite the 14 holes in my ears — remains tattoo-free. They weren’t totally wrong. I love the look of a perfectly placed, subtle tattoo. I’m not afraid of the pain (see: 14 holes). I even have some ideas of what I’d get. But the idea of having something so permanent and irreversible(-ish) on my body makes me panic thinking about one day regretting it. Who wants to live with a reminder of a bad decision literally tattooed on their body?

Enter Ephemeral Tattoo, a brand new tattoo shop in Williamsburg, Brooklyn that is revolutionizing the tattoo experience with the world’s first “made-to-fade” tattoos. Using a medical-grade solution that allows your body to break down the pigment gradually, these tattoos are designed to last about a year, having fully faded by 15 months — in short, fellow commitment-phobes, rejoice.

On a Monday evening, just a few weeks after the parlor first opened their doors in March, I went in for my first tattoo experience — here, everything you need to know.

Ephemeral Tattoo is the brainchild of Brennal Pierre, Vandan Shah, Jeff Liu, and Josh Sakhai, the latter of whom was still an undergraduate at New York University when the idea first began to percolate. “We all grew up in immigrant households,” says Sakhai, who was raised in a Persian-Jewish home. “Growing up, I was somewhat rebellious. These traditions and values felt like rules and restrictions, that really felt like limitations on how I can be in the world and how I can express myself. And one of the things that I couldn't do was to get a permanent tattoo. Then when I was out on my own in college, it was time to walk the walk of this rebel I said I was.”

Intimidated, Sakhai began to fantasize about a tattoo that had all the appeal, but less of the long-term commitment. “A lot of people called us crazy. And honestly, they're not wrong,” he says. “It took us many, many years to develop the technology, and there's a reason why it hasn't existed before.” It was six years, in fact, from then until 2021’s grand opening. “We developed over 50 different formulations over the years to get to where we are now,” he continues. “All that brought us to the technology that is finally ready for prime time.”

Ephemeral currently has a four-month-long wait list to get in, which you can sign up for on their website with a $20 deposit. (Full disclosure: the PR team arranged my appointment for me.) Three days before my appointment, I received a survey via e-mail that explained what a made-to-fade tattoo is, what fading may look like, and what to expect. From there, it gave tips on the types of designs best achieved by this type of ink (fines lines vs. thick ones; shading via line work vs. heavy shading). I was asked how set on a certain design I was, with the option to work with a designer on figuring that out. If you have an idea of what you want, like I did, it allowed me upload an inspiration picture for the artist to look ahead of time. I was also asked about my pain tolerance (high, I think) and where I’d be wanting my tattoo (arm). All in all, it took about five minutes to complete.

The shop is located on a prime location right off of Bedford Avenue in Williamsburg. The space itself is vast — a big warehouse-like room with about five sectioned off “rooms” divided by curtains to give each tattooer complete privacy.

Upon checking in, I was given a brief tutorial about the process and the ink itself. After being offered a water or naturally flavored soda, I was introduced to my tattoo artist, Anastasia, who was prepared with printed out designs she’d based on my inspiration images. I had sent over a crescent moon and an XO, an homage to the Elliott Smith album. There were two design options for each — a thinner and thicker option for the moon, and two different fonts for XO — and multiple sizes. We narrowed in on the thinner line design of a moon, but when I wasn’t 100 percent sold on the font choices, Anastasia broke out her iPad and came up with some new options that closer mimicked the album artwork. It took less than ten minutes to have a new design printed out and ready to go.

I knew I wanted the moon slightly above my elbow, so we tested out the design via transfer paper to the skin. We decided it should be a bit higher to avoid frequent friction from bending my elbow; during the process of figuring out the exact placement, Anastasia assured me we could play around with it until we got exactly what I wanted. The XO, I wasn’t sure of (again, commitment issues), but after some playing around, we ultimately decided on my ribcage.

Ephemeral is administered like a traditional tattoo with a traditional tattoo gun. We tackled my arm tattoo first, which felt exactly as I’d heard a tattoo described in the past: a little pain, but more of a tickle — similar to the feeling of laser hair removal. For a nickel sized tattoo, start to finish, the whole thing was done before the second song playing lightly over the stereo was finished. After we finished, we both snapped a few photos before covering up the piece with a special bandage that must stay on for three days, before starting the process over with my ribs (which, admittedly, hurt a bit more, but again only took about five minutes to complete.)

After getting both properly covered up, I was given a brief presentation via iPad about how to properly care for my new tattoos, and what to expect over the next few weeks. On my way out, I was given a logo-branded makeup case containing aftercare soap and ointment, as well as a Polaroid of my new tattoo — something permanent to commemorate something temporary. I was out the door almost an hour exactly after I had walked in.

My Ephemeral Tattoos immediately after application.

I was told to keep my HC patch covering the tattoos for three days. On Thursday evening, it was time for the big reveal... and they looked pretty much the same as when I last saw them on Monday. According to the studio, the full healing process, however, takes 4-6 weeks, during which the tattoo and skin around it may scab or become itchy — not unlike a permanent tattoo. At the end of that healing process, it will be at its most vibrant point, and start to gradually fade in months to come. Even just a few days in, I’ve caught myself staring at my new little guys and beginning to contemplate making them permanent — but luckily, I have some time before I have to even think about committing to that.