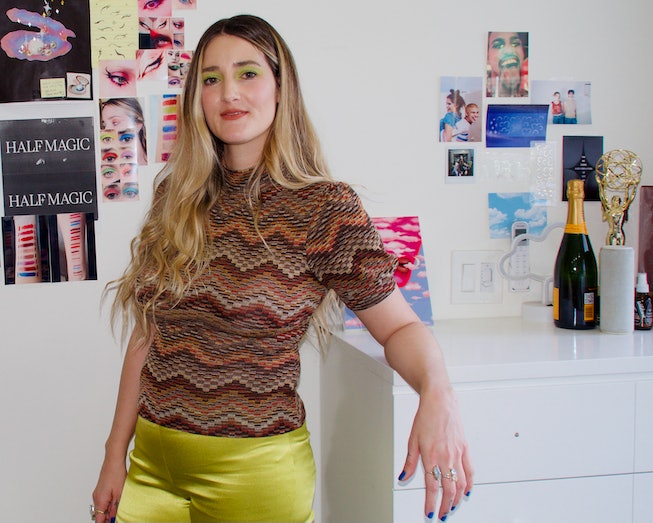 Courtesy of Half Magic

There’s arguably no TV show with a greater impact on makeup trends than Euphoria. In its first season, the HBO show inspired countless tutorials, recreations, and inspired designs across social media, and season two has been no different. Behind the iconic designs is the show’s makeup designer Doniella Davy. She also often gives a backstage peek at the looks on her Instagram, where she’s garnered over 570 thousand followers and counting.

In February, Davy shared an exciting announcement for Euphoria and makeup fans alike—her own line of glittery, pigmented, and playful makeup aptly named, “Half Magic”. On her Instagram, she invited people to follow the line in preparation for the launch this Spring. Today, the makeup artist shared on the brand’s account (which already has 66 thousand followers) that the collection is here. The first drop is now available on the website.

Previously, Davy has released Euphoria-inspired iridescent face stickers with the creative beauty brand Face Lace, but this is the first full line from the makeup designer. Davy shared her excitement for the brand in the caption, where she wrote: “What if I said I have a makeup line and it’s launching this Spring…..I can’t believe I’m finally able to share this, and that this is actually real!! For the past two years and while filming Season 2, I’ve been secretly working on creating the makeup line of my literal DREAMS. I couldn’t be more completely over the moon thrilled out of my mind to introduce H A L F ✨ M A G I C.”

Davy previously told Allure that Half Magic makeup “transcends the show” and is not necessarily just a Euphoria line. “In its own way, it became its own entity. We want to go with that and not just be an accessory to the show, because at some point the show's gonna be over,” she told Allure. With a product list that includes adornment tweezers, facial decals, and a winged eyeliner guide, it’s clear the new line embraces Euphoria’s signature maximalist makeup style, with unlimited room for variations.

According to Allure, some Half Magic items had already made their way into season two of the hit HBO series, although we’ve been given no details yet on which looks. On the release, Michelle Liu, general manager of beauty at A24, says the brand “grew out of the global beauty cultural phenomenon created by Euphoria fans around the world”. In other words, we can thank all the TikTok tutorials for this exciting new venture.