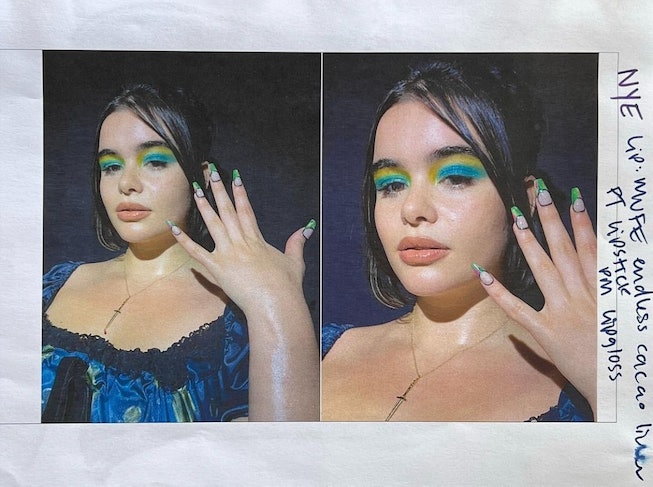 There’s no denying that the “Euphoria effect” has had a major impact on the beauty industry. After season one of the HBO show came out in the summer of 2019, it seemed like everyone was investing in purple glitter eyeshadow and trying out bold cat-eye looks– including many people who had never tried that makeup before. Season two is already on the path to having the same impact (although with slightly more mature, moodier looks), but what’s new is now everyone is also talking about the cast’s mesmerizing nail looks, thanks to Los Angeles-based veteran nail artist Natalie Minerva.

Minerva is the creative mind behind all of the iconic nail art we saw at the New Year’s party in episode one, including Kat’s graphic design, Cassie’s diamante nails, and Maddy’s Mugler-inspired look. We’ll also be seeing more of her work as the plot (and subsequent beauty looks) unfold this season. Minerva grew up in Orange County and moved to Los Angeles in 2009, where she began working for the massive party group, A Club Called Rhonda and doing her own nails as a hobby. “Quickly people began to take notice,” she told NYLON. “A lot of industry people went to Rhonda like stylists and make-up artists, and so they introduced me to their celebrity clients.” Minerva's first celebrity nail client was Carmen Electra.

Flash forward over ten years and Minerva met the Euphoria team after Alexa Demie visited her old nail salon Nail Swag, and they “immediately clicked,” Minerva explains. “I thought the show could use some nail art since it’s such a current, beauty-based show and she agreed,” she says. “It was a very serendipitous moment for me and I’m so glad I had the courage to offer myself up. It feels like a match made in heaven.”

In the HBO series, the fashion and beauty choices often go hand-in-hand with the character development, inspiring many TikTok’s trying to decode the symbolism. Minerva’s wanted to keep that pattern up via the nail art choices in season two. “With Maddy, Alexa and I both wanted it to be a representation of her fierceness and a reflection of her level of self-care,” she says. “This girl knows what she wants, and this girl takes care of herself. It’s important to Maddy that she shows the world that she makes herself a priority.” Because of this, Minerva says she went with nails that are long, bold, and detailed for the character. Minerva’s says that her favorite nail that we’ve seen on the show so far was Maddy’s Mugler-inspired look in episode one.

For Cassie’s character, the key emphasis was on change. “We wanted to keep the femininity that Cassie brings to the show while giving her a slightly new voice in her beauty looks,” she says. “Kat also seems to be shifting this season. We really dove into color and textures with her nails, which contrasted with her dominatrix looks from last season.” Minerva says she’s already seeing people on social media mimic her designs for the show, which she loves—especially when they add their own spin). She’ll also be launching a collaboration with ManiMe in March 2022, which includes a Euphoria-inspired gel sticker set, for everyone who might have trouble creating Euphoria-inspired looks on their own.

Euphoria isn’t the first place you’ve ever seen Minerva’s work. She was also responsible for Barbie Ferreira’s pearly Met Gala nails and has a client roster that includes Demi Lovato and Amandla Stenberg. “A lot of time, clients come to me with a general feeling or inspiration,” she says. “Then I prep some different samples to see if I’m aimed in the right direction.” From there, Minerva says the collaborative process usually looks like the client coming back with “I like this and I want to combine it with this” or “let’s do this and change the color” until they have they have settled on a final look.

With Euphoria nails and her new disco ball nail design going viral recently, Minerva believes 2022 will be the year where abstract concepts will find a new outlet, turned into nail art. “I’m loving the surrealist approach to nails right now because there really are no rules anymore,” she says. “3D shapes, oddball color combinations, psychedelic patterns. It’s so fun to watch and I’m glad people are taking risks with their nails.” In case you needed any more permission to go for that elaborate nail art design saved in your phone, Minerva also reminds us that the best things about manicures are that they are only temporary. “You change your nails every two to three weeks anyway, so you might as well explore your creativity and enjoy the ride.”