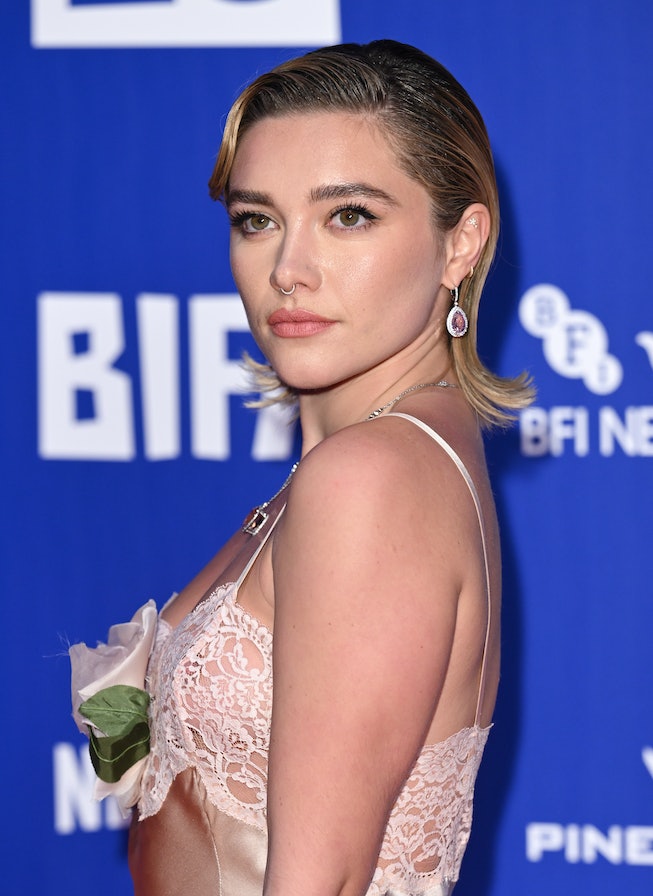 With makeup looks from Netflix’s Wednesday series currently trending, it’s safe to say that goth makeup is officially back. While this can mean more black clothing and makeup (heavy eyeliner and chunky black boots, for example), it also brings with it deeper shades of red lipstick. On Monday night at the British Fashion Awards, Florence Pugh perfected the art of the deep red lip while wearing a red backless Valentino gown and slicked-back hair.

Pugh’s makeup artist Alex Babsky posted a behind-the-scenes photo of the actress’ (literal) red carpet makeup on his Instagram with the caption “Tonight; DEEPEST lips on @florencepugh for the British Fashion Awards.” He also posted an in-process video showing the “finishing touches” of the look, as well as sharing a full product list for those who want to recreate the shade at home.

Babsky used a full set of Valentino Beauty products for Pugh’s makeup, including Very Valentino foundation in shade MA3, Universal Bronzer, and the Eye2Cheek Blush in shade 11 on her face. For her eyes, Babsky used Magnificent Mascara and the Brow Trio in shade 2. Babsky got extra creative with her dark red lip color, combining Rosso Valentino lipstick (shades 502R and 199A mixed) with “a touch” of Twin Liner in the shade “Black & Nero.”

Pugh’s final face of makeup for the event was a fall dream, worn with a septum ring for the ideal balance between chic red carpet makeup and goth glamour. With the entire product list used for the look at our disposal, we can all now also make our own punky dreams come true — as long as we perfect the art of using black eyeliner as an all-over lip touch-up, which may take a few rounds of practice.

NEXT UP
Beauty
The Best Beauty Looks From The 2023 Grammy Awards
Beauty
Charli D’Amelio and Landon Barker Wore His & Hers Goth Manis To The Grammys
Culture
The Cutest Couples At The 2023 Grammys
Culture
Caroline Polachek In KNWLS & More Party Photos You Missed
Style + Culture, delivered straight to your inbox.