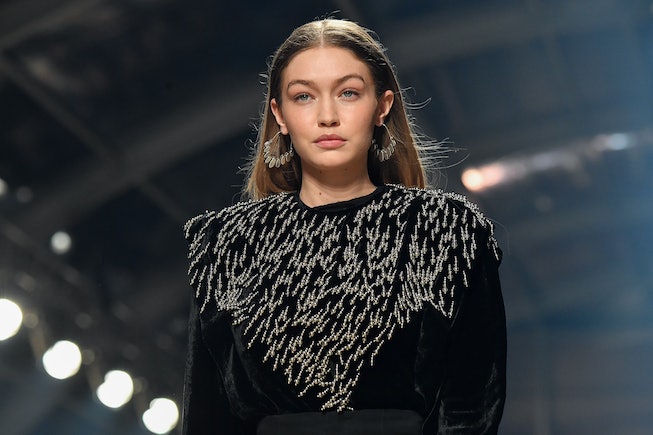 During an Instagram Live appearance for Maybelline Cosmetics, Gigi Hadid addressed ongoing speculation that she's had plastic surgery. Appearing on the social media platform for a makeup tutorial with MUA Erin Parsons, Hadid shot down rumors regarding her body.

The conversation, which you can view on Maybelline's Instagram account, featured Parsons and Hadid walking through the makeup needed for a "Zoom-ready" look. While working on her cheeks, the topic of Hadid's body came up, and she commented on some of the things she's read about herself. "It’s so funny the things you see online, people think that I shape my brows really arched. If you look at baby pictures of me I’ve had these crazy arched brows since I was born," she said.

In addition to addressing her brows, Hadid denied ever using fillers, saying, "People think I do fillers on my face and that’s why my face is round, it’s like I’ve had these cheeks since I was born. Especially fashion month when I was already a few months preggo."

Although Hadid has chosen not to undergo any body modification procedures, she shared her support for those that do. “I’m happy with the natural process of the world but no for those wondering I’ve not put or injected anything into my face. I’m so happy for everyone to do whatever they want that makes them happy and makes them feel more comfortable and good about themselves but me personally, it terrifies me. I think I’m too much of a control freak that I’m like ‘what if it goes wrong,'" she said.

However, even as one of the world's top models, Hadid still has moments of self doubt, and she admitted that she has insecurities. She went on to share her appreciation for makeup in those times, calling it a "beautiful tool to make you feel your best for special moments."

Below, watch the conversation between Hadid and Parsons, and see the look that the pair created for Hadid.