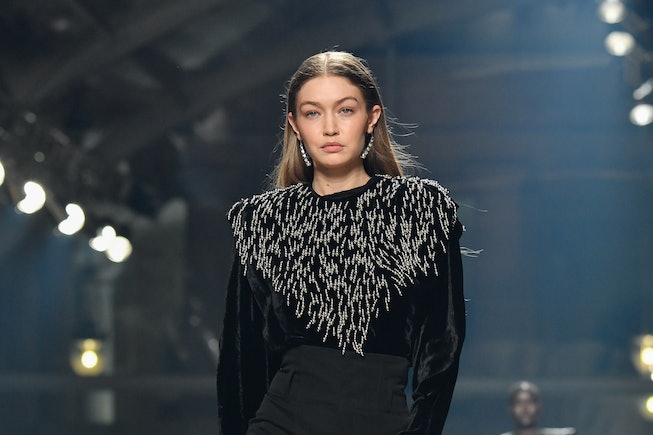 Gigi Hadid has gone from Victoria's Secret angel to Parisian punk rocker. For an appearance in the Chanel issue of Chaos SixtyNine, the model ditched her signature, long blonde hair, and was instead photographed with a short, shaggy style.

Posing atop a Paris rooftop for the December photoshoot, Hadid appeared in black and white for the issue. From the photos, which were shared on Instagram ahead of the magazine's release, you can see the choppy hairstyle, which was way darker than her usual shade of light blonde. Some photos featured Hadid wearing loose, wispy bangs, while other images had her hair tousled loosely for a messy, effortlessly chic look.

Photographed by Cass Bird, Hadid appeared in an all Chanel ensemble. The look, which featured dark nylon tights, an oversized tank, and a shiny jacket were the perfect accompaniment to the look's very punk vibes. In one photo, a long, see-through skirt took center stage, as Hadid posed topless, cradling her head with gloved-hands.

Based on her most recent social media posts, it's obvious that Hadid hasn't stuck with the short style, but there's no telling what she'll be wearing on the runway, or at home, next. Short hair isn't exactly the norm for Hadid, as she was last spotted with a faux bob in November 2015, but since then, she has tried other looks including an elaborate beehive and faux bangs.