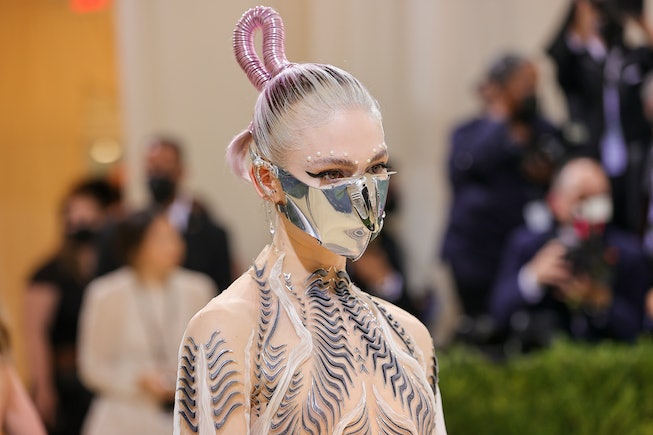 If there’s anything we can expect from Grimes at this point, it’s that she’s likely to surprise us at every turn. Sometimes the surprise takes the form of a secret second child born via surrogate with Elon Musk as revealed in a Vanity Fair cover story, other times she’ll spill details about herself casually on social media. At her most open, she’ll even engage with her fans, answering their questions and crowdsourcing opinions on Twitter. She’s been especially forthcoming when it comes to the topic of potential face and body modifications and plastic surgery in particular.

On August 15, she tweeted, “2 years ago I made an appt with a great plastic surgeon, thought I might want to change things up by my mid 30s, but then I forgot and never thought about what I should do. Any face mods y’all think would look good on me? (Elf ears isn’t an option, that’s a separate quest).” This revealed her intention to make some untraditional surgery choices, as well as the fact that she has been ruminating on the idea for some time now. She replied to her own tweet with the additional request: “Also does anyone know anyone great/ safe/ reliable ppl who could do vampire teeth caps on me in Austin or la? Also, any reputable elf ear modifiers in either of these cities? (Still debating this surgery cuz cartilage doesn’t heal so it requires permanent stitches).”

About a month later, on September 17, it appears that Grimes may have gone through with her intentions to get elf ears. She posted a selfie to Twitter with her head entirely bandaged — notably including her ears, captioned, “I did smthn crazy!” The new photo has Grimes fans speculating that she went through with ear-altering surgery. “YOU DID THE EARS??” one fan replied to her post.

The tweet apparently announcing her recent elf ear surgery also comes with the information that her highly anticipated sixth studio album, Book 1, is finished. She also tweeted, “My friend and I perfected the last song in the plastic surgery clinic cuz they wouldn’t let me leave and we were laughing that this was the most Hollywood moment of all time,” demonstrating the timeline between her album wrap-up and her surgery. “I have 20 songs so maybe BOOK 1 and BOOK 2? Deciding format/ tracklist.” And so it seems we are entering a new era of Grimes — complete with elf years.

Grimes’ teased album cover for Book 1 features many fantastical beauty moments, including white hair with choppy bangs, red eyes, and pointed embellished black and silver nails in addition to pointed elfin ears — so we already have a preview of what she might look like.

While it remains to be seen whether Grimes actually went through with the elf ear body modification — we’re still waiting on the formal reveal — it’s clear she is prepping us for something big coming in the future, and it’s definitely sure to be much bigger than just her own physical appearance.