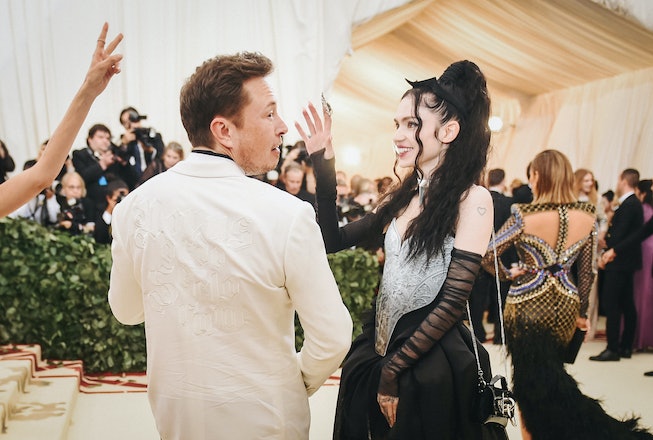 Grimes already lives her life with a cloud of mystique and intrigue hovering over her every TikTok, musical release, or early investment in AI. And of course, nothing dives headfirst into the mystique more than naming your child X Æ A-12. But now Grimes and even out-Grimed herself: Turns out, she had a secret baby girl.

In a new cover story interview with Vanity Fair that will be referenced until the end of time as a case study in celebrity weirdness, Grimes revealed that she and Elon Musk welcomed a baby girl into their life via a surrogate in December 2021.

During the interview, journalist Devin Gordon could hear two babies crying, so she asked: “Do you have another baby in your life, Grimes?”

“I’m not at liberty to speak on these things,” she responded, and then said: “Whatever is going on with family stuff, I just feel like kids need to stay out of it, and X is just out there. I mean, I think E is really seeing him as a protégé and bringing him to everything and stuff.… X is out there. His situation is like that. But, yeah, I don’t know.”

Um, sure! At this point, Gordon stops the interview to talk about how bizarre the situation is. “I suggest we pause for a moment to discuss the surreal professional ethics at play, which are that I can’t pretend I don’t know she’s got a secret baby with the world’s wealthiest man hiding upstairs. Especially when she invited me here,” she writes. Eventually, they both laugh and Grimes confirmed they did indeed have another baby.

“I don’t know. I don’t know what I was thinking,” she said, laughing, about trying to hide her newborn daughter, whom they call Y, which is an obvious complement to the Grimes and Musk’s first child together, X. Grimes’ daughter also has an equally compelling full name: Exa Dark Sideræl.

Exa is a reference to the supercomputing term exaFLOPS (the ability to perform 1 quintillion floating-point operations per second), while Dark references the unknown. “People fear it but truly it’s the absence of photons,” said Grimes. “Dark matter is the beautiful mystery of our universe.” It wouldn’t be a Grimes baby without an elven reference, and Sideræl— pronounced “sigh-deer-ee-el” — is “a more elven” spelling of sidereal, “the true time of the universe, star time, deep space time, not our relative earth time.” It’s also a nod to Galadriel, her favorite Lord of the Rings character.

Along with Y, she and Musk also call their baby girl Sailor Mars, a nod to fiery Sailor Soldier in the Sailor Moon manga series. Even with all this, Grimes still frets that her daughter’s name veers on boring. “I was fighting for Odysseus Musk,” she told Vanity Fair. “A girl named Odysseus is my dream.”

Like every good Grimes cover story, the piece raises many questions, some of which get answered. No, she and Elon are together but not really together, and the two are still very much raising their two children together. “There’s no real word for it,” she begins. “I would probably refer to him as my boyfriend, but we’re very fluid. We live in separate houses. We’re best friends. We see each other all the time…. We just have our own thing going on, and I don’t expect other people to understand it.”

(Hours after the cover story was published, the pop star announced in a Twitter thread that she and Musk had once again split: “Me and E have broken up *again* since the writing of this article haha, but he’s my best friend and the love of my life, and my life and art are forever dedicated to The Mission now, I think Devin wrote that part of the story rly well.”)

If only we all had enough money to live in a separate house from our significant other! But speaking of money and class struggle, Grimes gets candid about that, too.

“I feel really trapped between two worlds,” Grimes said.. “I used to be so far left that I went through a period of living without currency, living outside.” She also talked about how she’d sleep in a tent when she couldn’t afford a hotel during her first shows. “I mean, when people say I’m a class traitor that is not…an inaccurate description,” she admits. “I was deeply from the far left and I converted to being essentially a capitalist Democrat. A lot of people are understandably upset.”

Grimes further clarified her statement in the aforementioned Twitter thread. “A bit of fact checking: I am not a capitalist democrat,” she wrote. “I don’t ascribe to any political party or economic model that currently exists. I think I was referring to how I am perceived but that is not my actual stance.”