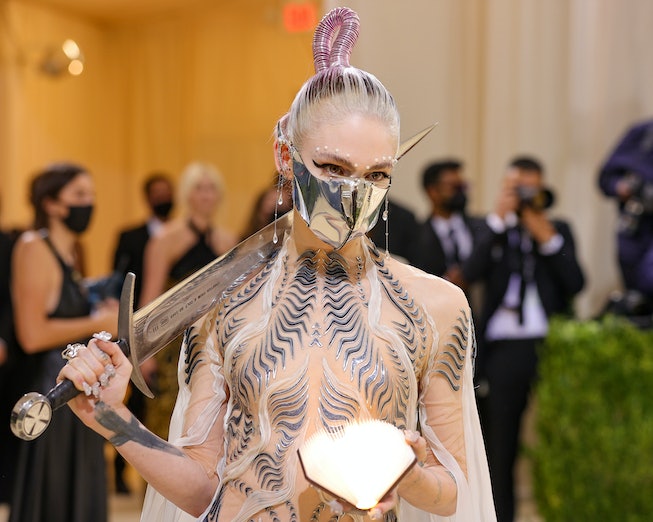 Grimes is a visionary artist, and her highly anticipated sixth studio album is shaping up to be an exciting new era in her discography. Even back in 2018, two years before the release of her record Miss Anthropocene, Grimes was dreaming up the music, saying she was “crazy stoked” about what was to come. The singer has been dropping little bits of information regarding the forthcoming record in true Grimes fashion, often through Instagram comments, her own Discord community, or very fun TikTok videos.

“I think it is by far my greatest work that I’ve ever done,” she said in a video interview with Vogue. “I think I went into this being like ‘I’m going to sign to a major label and I’m going to be a really big artist’ and all this stuff, and in that process, I started being like ‘no’. I… literally don’t care if anyone listens to this sh*t. I just want it to be great, to be unequivocally just great art.”

It’s now been revealed that the project is titled Book 1. Its visually stunning cover — which shows an evil elf version of Grimes standing against a spectacular celestial backdrop, and feat of CGI engineering — further cements that the album will truly be uncharted territory for the pop star in scope and scale.

Book 1 is tentatively due this spring, and there’s plenty to get caught up on before the new age of Grimes begins. See everything there is to know, below.

The album will be called Book 1

In an Instagram post, Grimes finally revealed that her sixth studio album is called BOOK 1 — a title that implies the existence of further books to come. “And so the BOOK 1 era begins,” she wrote.

It’s a “space opera” about a lesbian AI romance

Grimes is an artist, which means she doesn’t just “make records,” she has “concepts.” Like her fifth studio album, Miss Anthropocene, which was loosely based on an "anthropomorphic goddess of climate change" inspired by Roman mythology and villainy.

Now her forthcoming record is leaving earth and heading out to the cosmos. From Grimes’ Instagram comments to your ears: “It’s a space opera about CLAIRE DE LUNE — an artificial courtesan who was implanted in a simulation that is a memory of the AI creation story on earth from the brain of the engineer who invented AI because he wants to re live his life but see if his perfect dream girl could teach him to love and thereby he would preserve humanity this time rather than let them fade into obscurity — overcome by the machines.”

She continued: “As she slowly realizes she is essentially a dancing puppet for the male gaze tho, their relationship grows complex. Simultaneously — ‘NO ONE’ (the most powerful super intelligence in the future where the simulation is being rendered from) realizes there’s a massive hyper-realistic sim running and sends in her troll AI puppets to wreak havoc.”

Grimes further clarified the album’s arc in a cover story with Vanity Fair, explaining that it takes place in the distant future when technology allows a person to upload their consciousness into a robotic body and live forever. Sci-fi nerds will already recognize this concept as a Cymek; Book 1’s antihero, the world’s greatest engineer and “dark king” featured in her Player of Games music video, is one of these entities, and he’s a whopping 10,000 years old at the start of the story.

The album also brings in a Swan Lake thread, including a white and black swan with their own cyberpunk twists. The white swan is an exaggerated version of Grimes herself: the Cymek’s dream girl and muse; the black swan is an AI creature who lives to sow chaos in the simulation. And since this is a lesbian AI space opera, the two swans fall in love with each other and drop the Cymek.

It’s her first record after parting ways with 4AD

Grimes joined Columbia Records in March 2021, after releasing three albums on her former label 4AD. Grimes had her fair share of issues with 4AD, once calling it a “sh*t label” on Twitter; she quickly apologized, writing, “i'm sorry negative shit i said ended up in the press today, i didn't mean to spread bad vibes ugh.” That being said: the music industry does suck!

During a transmission on the “Metaverse Stage” of her newly launched Discord server, Grimes teased a new song, “Shinigami Eyes,” a techno track that’s part ode to the popular anime Death Note and that time she trolled everyone into thinking she got experimental eye surgery to block out all blue light. Grimes initially hinted the song’s title with binary code — she is nothing if not but on-brand.

Her obsession with the anime has been well-documented, and Grimes scholars already knew she was captivated by Shinigami, the supernatural spirits that invite humans toward death in Japanese culture. “I got Shinigami eyes. It cost me half my life span but now I can see the true name of everyone and when they will die,” she tweeted in 2019. “Only the real will ones will understand.”

Grimes and Banks are both groundbreaking artists in their own right, and in some alternate universe, they did collaborate to create a paradigm-shifting song. Sadly, on this plane of existence, plans for a collaboration quickly unraveled in 2018 after Banks flew to Los Angeles to ostensibly record, but spent the weekend waiting for Grimes in Elon Musk’s home. Then came the text message argument screenshots, which included haunting disses about how Grimes smells “like a roll of nickels” and how Banks is a buffet’s biggest fear. The beef, which is now legendary, for better or for worse, even escalated out of the music sphere and into lawsuit involving Tesla. After teasing “100 Percent Tragedy,” Grimes wrote in her Discord chat that that song “is about having to defeat azealia banks when she tried to destroy my life.”

Banks initially wasn’t down with the backstory to “100 Percent Tragedy,” but since Grimes and longtime boyfriend, Elon Musk, announced their split on September 24, the hope for a collaboration has been renewed. “Okay girl, can we finally make those darn songs now that apartheid Clyde is out of the way?” Banks wrote on her Instagram story. “We were really supposed to eat these bitches up.” The butterfly effect of these songs could lead to so much peace, prosperity, and abundance. Think about it...

Grimes confirmed that the forthcoming “100% Tragedy” video features Liv Boeree, a former World Series of Poker star and trained astrophysicist, as the black swan opposite the singer’s white swan.

“Player of Games” is the first official single

The Grimes album rollout has been a fun ride, and on November 29, the singer announced that her new single “Player of Games” would drop on December 3. (“For real this time. Phew,” she noted, because despite her lofty visions, she is always self-aware.) The official announcement was also extremely on-brand: a tweet in binary code.

Real heads heard a snippet of “Player of Games” back on July 22 on TikTok, and the lyrics at the time invoked a sense of loss and acceptance. Grimes sings about space, love lost, and Europa, one of Jupiter’s moons. Until we get the full story, Grimes dropped some classically ethereal photos, which you can view, below.

“Player of Games” might be one of Grimes’ most cinematic videos to date. There’s no shortage of sci-fi and fantasy elements, including but not limited to lightsabers, sword fights, an enchanted forest, and a standoff with a massive knight who also happens to be her lover and nemesis. Written by Grimes and directed by Anton Tammi, "Player Of Games" also shows Grimes at her most ethereal — she’s extra elvin in an icy blonde wig, medieval headwear, and flowing gowns. It’s a total trip and a gorgeous harbinger of what’s to come in her Book 1 era.

After releasing the music video’s trailer in all its futuristic alien glory, Grimes has released Book 1’s second single, “Shinigami Eyes,” which includes a cameo from BLACKPINK’s Jennie.

In the futuristic and cinematic visual — which is what we imagine browsing Web 3 must feel like — Grimes inhabits a vibrant holographic world, dancing with floating arrows and frolicking with strange metallic angels. Jennie joins the ride for a short scene atop a winged-car as they zooming through a rainbow expanse that also looks like Rainbow Road from Mario Kart. It’s a visually-rich video that could’ve only sprung from the well of genius that is Grimes’ brain.

Give it a watch, below.

In December 2021, Grimes shared a TikTok with demo alluding to Calypso, a nymph who lived on the island of Ogygia in Homer's Odyssey. Calypso detains Odysseus, promising him immortality should he stay with her; Odysseus denies Calypso’s offerings, and eventually returns home. It parallels “Player of Games,” in which the “dark knight” leaving to explore space against the wishes of his beloved, and also includes references to the Greek myth of Persephone and Hades.

“These weren’t just hot girls,” said Grimes to Vanity Fair. “They were the smartest girls, some of the most educated women of their time.”

The album also references Athena, Anne Boleyn, Marie Antoinette, courtesans, concubines, and geishas — all women whose power was later minimized by the guys they interacted with. “I’m super inspired by the way women get pulled into orbits in this manner,” she said. “There’s this weird dismissal of them. These are some of the most interesting characters in history to me, and they’re so demeaned…. I feel like the most radical thing I could do right now is just become Marie Antoinette. Infamy is kind of fun.”

(The French queen gets her own shoutout in the song “Marie Antoinette 2077”: “I ate my cake / I lost my head / Villain of the internet.”)

She’s working with The Weeknd

As if Book 1 wasn’t already one of the most highly-anticipated releases of the year, Grimes upped the ante by revealing that the album includes a collaboration with The Weeknd. The track “Sci-Fi,” which Vanity Fair called a “soon-to-be-ubiquitous banger” was co-written by Grimes, The Weeknd, his longtime producer Illangelo. We simply cannot wait.

The album is almost ready

Grimes has been teasing Book 1 for what feels like an eternity, but as of September 17, there finally seems to be an album-shaped light at the end of the tunnel. The singer revealed that she had moved onto the mixing phase of the album — which partly took place in a plastic surgery clinic where she may or may not have undergone a body modification for elf ears.

“My friend and I perfected the last song in the plastic surgery clinic cuz they wouldn’t let me leave and we were laughing that this was the most Hollywood moment of all time,” she wrote about the very surreal, very Grimes experience. “I have 20 songs so maybe BOOK 1 and BOOK 2? Deciding format/ tracklist.”

Grimes also teased about something exciting coming on September 30, and assured fans that her long-awaited collaboration with the Weekend was imminent: “Depends on Abel and Columbia but , I had a rly intense medical situation in the spring so I am relishing the delay tbh. The delay is kinda convenient cuz I’m just getting back to health.”

This article was originally published on Sep. 24, 2021