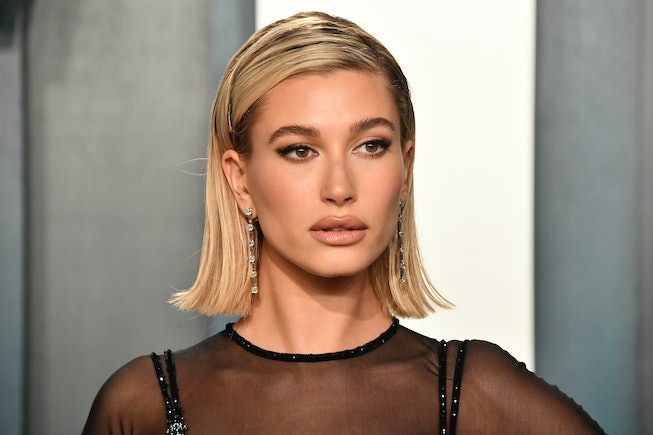 Fresh off a temporary stint with bleached brows, and Hailey Bieber revealed another change in her usual beauty routine. Like many celebs over the last few months, Bieber held off on hair salon visits, and at one point, her natural dark brown roots were visibly prominent. She's since resumed her usual honey blonde routine, and even added a bit of length.

Hairstylist Priscilla Valles confirmed via Instagram that Bieber recently had a pretty extensive hair appointment, including the addition of extensions, a cut, and a color. Valles shared that she was responsible for the extensions and cut, while colorist Cassondra Kaeding completed the coloring.

In one outdoor photo, Bieber's hair was parted down the middle and had a hint of waves. The once darkened hair was clearly lighter, and featured gold tones throughout. In an additional photo, taken for a Levi's campaign, Bieber's lighter blonde waves were more pronounced, and you could see that her hair now hit below her back.

Although aspects of her hair do appear lighter, it seems that Bieber did opt to keep some of the darker hues around. In the Levi's photo, her roots look darker than the rest of her hair. However, it is possible that the photos were taken before her newest style provided by Valles. Either way, the major beauty changes continue for Bieber.

The model isn't the only one brightening up her hair for fall. Bella Hadid took a cue from the '90s, revealing golden brown highlights during a recent October outing.