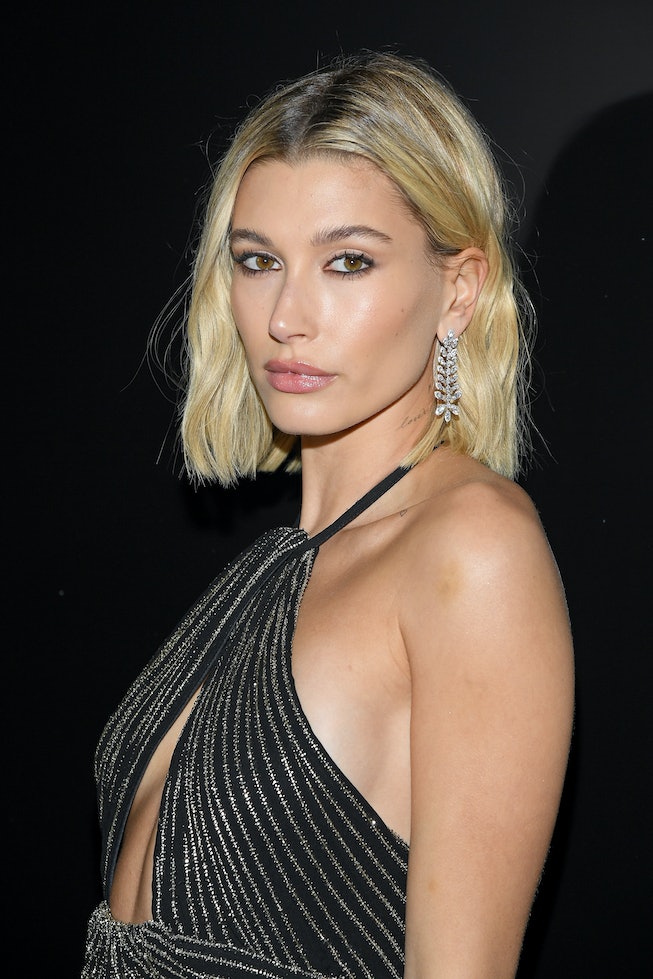 Hailey Bieber tried out a new look with her brows. After spending much of the last few months wearing her naturally-colored hair, Bieber has debuted a number of beauty changes, beginning with an increase in the size of her dainty hand tattoo. Now, she's moved onto her brows, unveiling her take on the popular bleached trend.

Photographed in Milan for Fashion Week, Bieber was spotted out and about, her brows noticeably absent. Posing for a selfie in front of her giant Versace billboard, Bieber wore her hair pulled back in a low bun. The remainder of her face was hidden behind a dark-colored mask, and she accessorized with Versace sunglasses.

Although her brows were bleached, her hair color appeared to be a bit closer to her natural shade of dark blonde. Prior to practicing social distancing, Bieber was frequently spotted with light blonde hair.

The brow-less selfie hasn't yet made its way to Bieber's Instagram, so for now, fans will have to wait and see whether the look turns up at a future fashionable appearance, or on the 'gram. However, it's clear the bleaching process was completed recently, as Bieber spent the weekend with Kendall Jenner, and at the time, her brows remained their natural coloring.

Hollywood has continually embraced the bleached eyebrow trend, and celebs including Lady Gaga, Kristen Stewart, and Jaden Smith have all been spotted sans-brows. Even Bieber's bestie, Jenner, went without brows for a 2016 Marc Jacobs show.