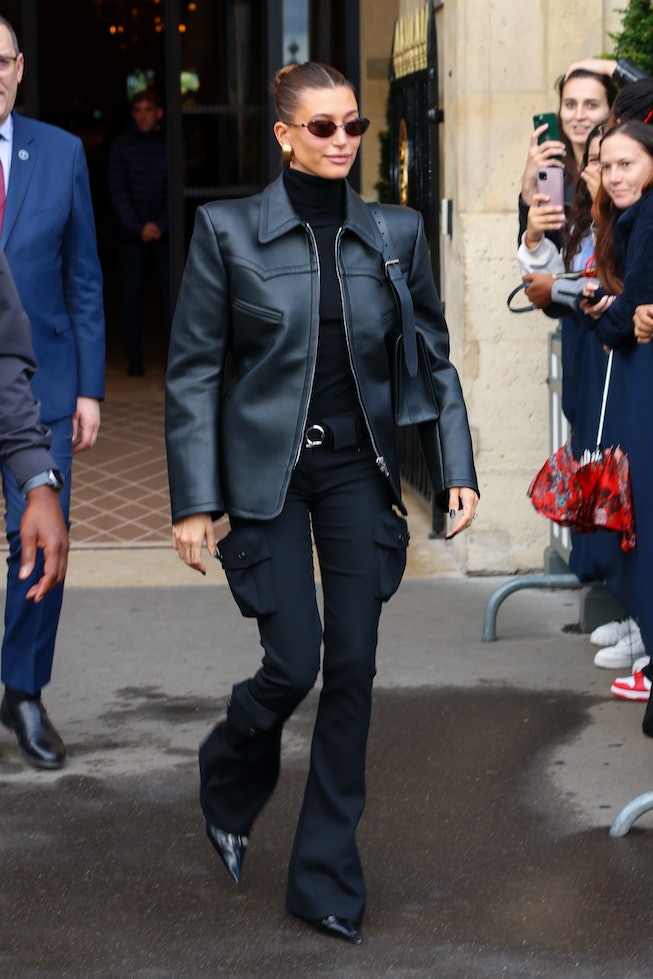 It was only back in July that Hailey Bieber started a viral TikTok nail trend called “glazed donut nails.” Sharing her secret on her TikTok account, the model’s go-to manicure is a mixture of a mauve-nude color combined with a clear gloss to make the mixture “thinner.” She then adds a layer of chrome white gloss to give it an iridescent feel. Since sharing her method, creators have been testing and sharing different color variations. Bieber herself even shared a fall upgrade in September, chocolate glazed donut nails. Known for her natural-looking manicures, Hailey’s latest manicure is a dramatic shift away from glazed nails — sharing an all-black Halloween manicure on her Instagram earlier this week.

Bieber posted her new gothic manicure in a photo dump with the caption “Oct 1.” Clearly gearing up for the spooky season, her black manicure was featured in contrast to a neon orange dress and shown off in a makeup selfie. The glossy black polish was kept simple with a natural oval shape, but the bold, high-density color is a major change for the model. Adding a grunge edge to her “clean girl” slicked-back hairstyle, Bieber is also wearing heavier and darker makeup than usual in the series of photos, with a deep maroon lip shade and a brown smokey eye.

Bieber is known for switching up her nails constantly, so we doubt the black nails will still be around for Halloween (she will most likely opt for a more overtly spooky manicure instead). They are, however, the perfect build-up manicure for those excited for the spooky season. Clearly a fan of her new bolder nails, Bieber also featured her nails sporadically in an earlier photo dump, holding up a croissant and keeping her hand up for candid outfit snaps.

Black nail polish and makeup are having a major moment currently in the world of beauty, with the return of goth and grunge trends bringing back black lipstick and heavy eyeliner. With Bieber now jumping on the trend, all black manicures are bound to reach viral status this fall and winter, broadening the appeal for the usually divisive nail color. As the star has shown us, the only secret to pulling off black nail art is fully committing to the look (and showing it off whenever you can).