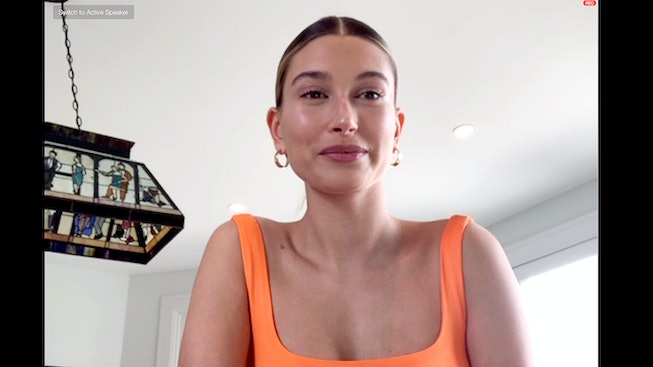 Fans got a sneak peek at some dainty new details added to Hailey Bieber's hand tattoo. On Monday, August 31, celebrity tattoo artist, Doctor Woo, shared a photograph of the new art he added to Bieber "awhile back."

The black and white photograph of the model's hand captures a line-shaped tattoo that runs along the edge of Bieber's hand. Although Dr. Woo, also known as Brian Woo, didn't divulge the exact date of Bieber's tattoo appointment, he did confirm that the ink was already in progress. "Adding a bit more to the symbols on hand," he captioned his photo.

For her hand tattoo, Bieber chose a number of lines and artful designs, creating a cross-section made of arrows, and an endpoint comprised of circles that vary in size. The artwork's end features three wavy lines, and the other end of the tattoo reaches just below a finger tattoo.

There's no word from Bieber or Dr. Woo on what the tattoo might symbolize, but this isn't the first time the pair have collaborated on inked art. Dr. Woo previously added ink to Bieber's hand, and he added the word "lover" in a scrawling, script font on her neck. Teen Vogue also reports that Dr. Woo previously gave Bieber, along with her husband, Justin, a set of matching tattoos.