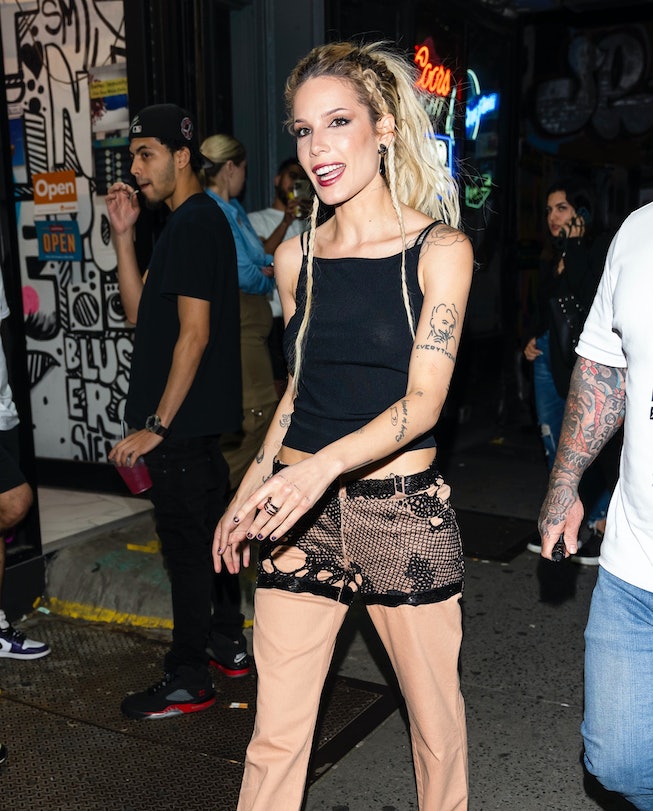 Recently, pop star Halsey has been serving us back-to-back nostalgic beauty inspiration. From paring spiky space buns hairstyle with a blue smokey cat eye straight out of the early aughts to Coachella earlier this year to wearing curly half-up and half-down ‘dos onstage, the singer has been switching up her look almost constantly. Now, she’s announced the return of the mullet on Instagram, embracing yet another retro style.

Halsey posted a video of her showing off and loving her new mullet haircut on Instagram last week. “return of my mullet. and the nineties-vibes-only red and blue makeup combo,” they captioned the post. In the video, her super short layered mullet was styled to mess, piecey perfection and she completed the look with throwback baby blue eyeshadow, deep red lipstick with dark liner, and chunky silver chain earrings. Halsey shared that her makeup was, of course, from her own brand, About Face Beauty. The caption also reveals:“made by color mixing eye paints and lip paints 🤍 @aboutfacebeauty now at @ultabeauty,”

Halsey has been a hairstyle chameleon as of late. They have bounced from short to long hair this year, rocking a short, curly, pixie cut in a deep brunette in January. By March, she was styling her hair in a waist-length, waves with short bangs (clearly with the help of extensions), then she went full-on blonde in May after her Coachella space bun moment. For the new mullet, they’ve held onto the kept the blonde color and allowed her dark natural roots to show, adding to the punk-rock edge.

Despite the blonde shade, Halsey’s hair calls to mind rock icon, Joan Jett who was famously known by her dark, shaggy mullet cut throughout the ’80s and ’90s. We’re sure it’s no coincidence that Halsey is leaning into nostalgic rocker style as they’ve been most recently touring with their most rock driven album to date. Her fourth studio album released in 2021, If I Can’t Have Love, I Want Power, was produced by Nine Inch Nails members Trent Reznor and Atticus Ross. The Love And Power Tour kicked off in May and is touring internationally through the end of the summer.

The mullet has been having a major comeback since 2020. No longer only a hairstyle reserved for ’80s rockers and rebels, celebrities like Rihanna, Barbie Ferreira, and Miley Cyrus have all tried out the modern mullet in recent years. Alongside the pixie cut and the mixie cut (a combination of a mullet and a pixie), shorter styles have been having a major resurgence this year, making Halsey’s new cut another winning trend. And after all, what better haircut to complement with a cropped tee and low-waisted leather pants?

NEXT UP
Beauty
No One Does #PamCore Beauty Better Than Pamela Anderson, Herself
Beauty
Dua Lipa’s ’90s Updo Is Hair Inspo For Your Next Night Out
Beauty
Storm Reid Tries Out A Y2K Girl Band-Favorite Hair Trend
Beauty
Bella Hadid’s Clip-less Updo Is Going Viral On TikTok
Style + Culture, delivered straight to your inbox.