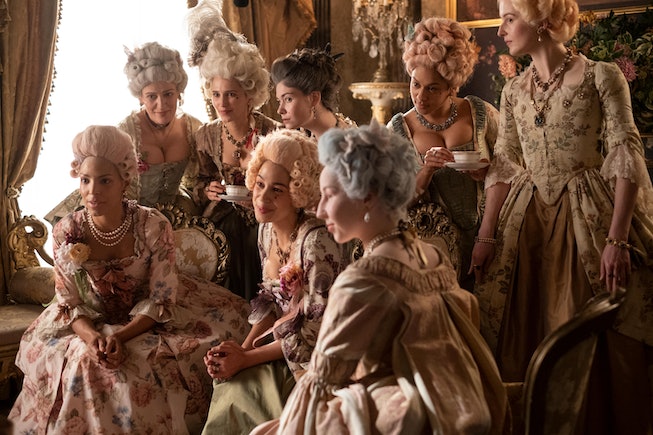 Even with the constant scheming and romantic entanglements featured on Hulu's The Great, the new series — starring Elle Fanning and Nicholas Hoult — still found time to create an array of intricate and enviable beauty looks. The 18th century is (thankfully) far behind us, but as the show's hair and makeup artist Louise Coles told NYLON, the beauty present from that time period isn't all that far removed from our modern-day makeup routines.

When it comes to an era of royalty and extravagance, The Great is the latest pop culture moment to draw from that time period. As the Hulu series, along with Sofia Coppola's Marie Antoinette and countless other magazine editorials have demonstrated, there's a significant interest in the over-the-top wigs and makeup of the time. According to Coles, the decadence of that era is what continues to draw people in. "Everything we do now in modern times — we have the technology and the fashion is obviously different — but, we do all this. We've got our nails, hair extensions, eyelash extensions," she said. "Back then, it was so in front of you that the imagery is so strong. It's a standalone century because there's so much, and it's so fun to recreate. There's really nothing before or since that's quite as extravagant."

Modern day beauty routines don't require quite the same level of extravagance, but that doesn't mean your favorite makeup didn't get used in recreating The Great's 18th century-inspired looks. In addition to using products from Chantecaille, M.A.C., and Tatcha, the Great crew relied heavily on Glossier. "We used a mixture of Glossier Cloud Paints," Coles said. "You can really build those up, and the sort of gel cream consistency works really beautifully."

Dew and glow weren't the only beauty hallmarks of the series. Coles — who worked alongside a larger team that also included Siân Grigg, who created the looks featured in the pilot, and Lorraine Glynn and Erin Ayanian Monroe, who did Fanning's respective hair and makeup — shared that extensive research was required of creating Great beauty looks. Those who worked on the show visited galleries, read books, and researched all that they could from that time period. Even then, Coles did admit that they still got creative with some of the characters. "You can kind of break the rule book in a way that works for the characters," she said. "The characters are so richly written and there's so much you can do with each one. There was a lot of fun to be had with history."

According to Coles, the show bended the most rules with beauty when it came to creating two specific looks for each character — one for their home life and one for their life in court. "We had them taking their wigs on and off all the time. They had full looks, where they had hard-fronted wigs on, and more natural looks, where you'd find them in their apartments," she said. "We did things within the story [to bend the rules]. We had them put on wigs not quite right, or had them put back on with hair peeking out in the back." She pointed out that period dramas typically rely on perfection and perfectly nailing their recreated beauty routines, but with The Great, the hair and makeup team wanted to bring in modern texture and materials.

Of the show's many characters, Coles had a hand in working directly on Aunt Elizabeth (Belinda Bromilow), Tatyana (Florence Keith-Roach), and Lady Antonia Svenska (Danusia Samal). Each of these women came with their own distinct beauty personalities, she says, right down to the use of 18th Century-inspired beauty patches. "Each character had a patch that worked for that character," she noted, pointing to Aunt Elizabeth's butterflies and bird patches, as well as Georgina's (Charity Wakefield) under the eye patch, which reflected that she was passionate.

Coles also pointed to the individual character hair, noting that Aunt Elizabeth wore a more Bohemian, masculine-inspired wig with bows, which was meant to play off her whimsical personality. Meanwhile, when Tatyana took her wig off, her hair underneath was intended to look damaged, possibly due to the overuse of extreme bleach products once popularized of that time period. As for Lady Svenska, you rarely see her without a wig — as her character was quite prissy, — but, Coles did share some insight about what might be underneath. "The idea was that if her wig was off, her hair would be cut really short. Often these wigs are so destructive, and there was also a huge lice problem back then."

Ultimately, whether it was the use of more than 500 wigs, which required a daily baking, or the inclusion of a rosy glow by Glossier, the beauty of The Great came with a greater purpose — showing the rawness of an often tumultuous time through the lens of fun, personalized beauty.

NEXT UP
Beauty
The 2022 Billboard Music Awards Brought Out The Best of Rockstar Beauty
Beauty
11 AAPI Beauty Pros and Creators You Should Follow Right Now
Beauty
Meet Matthew Newman, The Hairstylist Behind the Latest Viral TikTok Blowout Tutorial
Beauty
Doja Cat Channels The ’90s With Her New Blunt Bangs