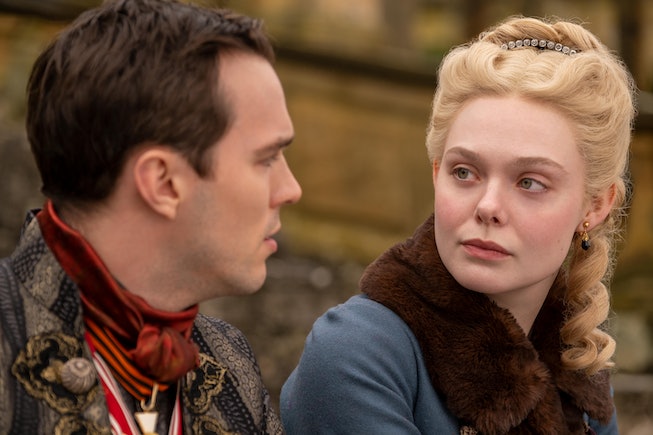 You know what's tired? Television and films about the French monarchy. It's time we moved on from Versailles to greener, more opulent pastures. For example, Imperial Russia's Winter Palace. Thanks to Hulu, we'll have the chance to explore the twists and turns of the Russian monarchy that led to the rise of famed monarch Catherine the Great in the new series, The Great.

The series is written by Oscar-nominated writer of The Favorite, Tony McNamara, which basically promises that the show will be a dark, deranged, and highly-entertaining satire. “I find period shows too polite on the whole,” he said in an interview with Vanity Fair ahead of the show's May 15 release. “They’re so drowned in their own historical facts.” Historians, look away! The Great will only bring the best semi-historical accuracy Hollywood can buy.

For those unfamiliar with the monarch, here's a brief one sentence history: Catherine became the country's longest-ruling female leader after organizing a coup d'état against her husband. “She was a young woman who took over an empire," explained McNamara. "She kept the Enlightenment alive in Europe when it was dying. And she invented the roller coaster.” History buffs can confirm the latter statement as fact.

Elle Fanning stars as the Russian empress, and The Favorite actor Nicholas Hoult takes on the role of the haughty and ultimately doomed emperor, Peter III.

Google photos of the Winter Palace to get into the right headspace, then watch the trailer below.