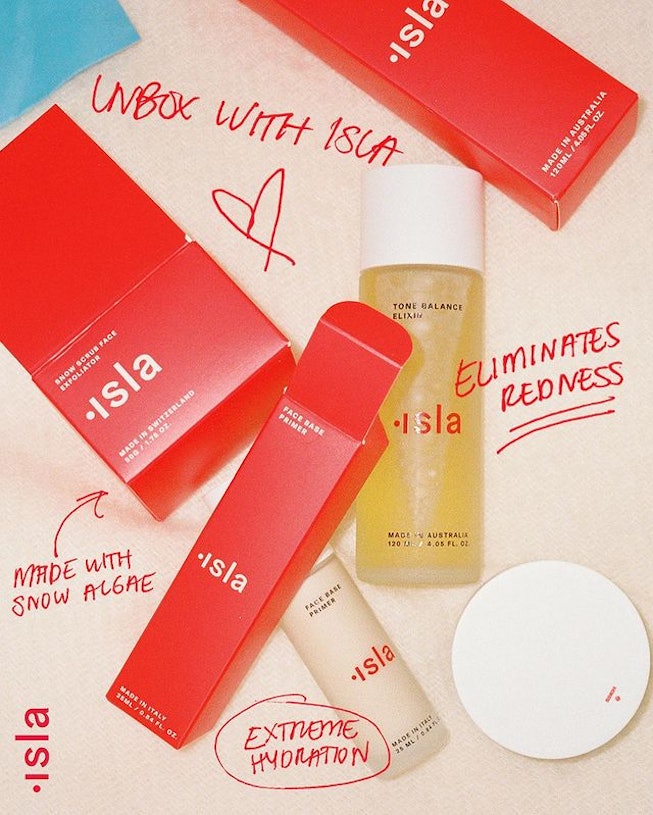 At first glance, Isla Beauty oozes cool. The font, the packaging, and the people in the brand's campaigns and on its Instagram look like people you want to know, befriend, and swap beauty tips with. Looking cool, though, doesn't guarantee that a seven-month-old brand can survive an unpredictable and unprecedented global pandemic. Thankfully, Isla Beauty has a lot more going for it than it's aesthetic.

Officially launched in April 2020, the brand introduced itself to the world with three new skincare products and the lofty goal of not only "reimagining" beauty essentials, but pulling back the curtain on the industry as a whole. For years, beauty brands — and those selling skincare products in particular — have crowded the industry with bold claims and promises of transparency, "clean" or "natural" ingredients, and a slew of other marketing-charged buzzwords that benefited from the confusion and fear of the consumer.

To set itself apart, the brand is rooting itself in consumer education by not only breaking down the origin of every ingredient, but by also releasing exact percentages of the active ingredients in its formulations, listing their benefits on the site, and voluntarily vetting that information through a team of independent scientists — a step often skipped in the process of launching exaggerated marketing claims into the market.

The products themselves, all multi-purpose and globally sourced, include the Face Base Priming Moisturizer ($46), a lightweight, dual purpose moisturizer and primer uniquely designed to protect your face from High Energy Visible (HEV) light emissions from screens and the sun; the Tone Balance Elixir ($48), a toner and essence combo that doses the skin with hydration; and the special Snow Scrub Exfoliator ($54), a physical exfoliant in the form of a bouncy scrub that gently sloughs away dead skin cells with no irritation.

"The main mission that we have with Isla is really to make performance beauty more transparent, more relatable, and more real," Isla co-founder, Charlie Denton, told NYLON over a summer Zoom call. "What we want to do is really connect our consumer with the experts and with the source." As a third-generation beauty maker in his Australia-based family, Denton found himself in just the right position with the right network — with suppliers, manufacturers, and formulators — to make that mission a reality.

"There's such a reused narrative in beauty where it's like, this brand that's brought to you by a beauty insider. And I think for us, we have all this information," said Tracy Dubb, the brand's other co-founder, based in New York. "Instead of just telling you that we're insiders and we've been doing it, why don't we connect people with the source? Why don't we tell people why ingredients are coming from all over the world and have other experts weigh in on our performance or our formulations?"

Rewriting the standard beauty brand narrative has also meant being especially critical about what it is Isla Beauty actually offers. Instead of launching with a traditional foundation system — like a cleanser, moisturizer, and maybe a serum or mask — Isla's three debut products were ones it's founders felt deserved to be reimagined. "If it’s not unique to the market, we won’t make it," the brand's site reads.

"Our whole brand is, I think, about reinventing and recreating your beauty experience at a very macro level," said Dubb. "It was a combination of these are three categories [that] we felt were kind of ripe for something interesting and new. Based on the network and Charlie's experience building products for different people, we kind of knew the partners that we wanted to work with on these first three products. And we worked with them on the ingredient story, and on the performance story, and the clinical study element of it, and these were the three products that we felt like we could put out that would really disrupt your routine, and were interesting and were outside of the box. And we're going to take that approach to all of the products that we put out, but we felt like these [products] really had an opportunity to deliver things that aren't in your routine — or are already, but aren't the heroes of your routine — and kind of make them the stars."

Despite a pushed back launch, a forced change in strategy, and attempting to gain an audience in a year where consumer loyalty is harder to obtain, Isla Beauty has made a unique entrance into a crowded market — one that seems promising enough to hold them over through this ever-changing time we're currently living in. According to the brand, Isla's best-selling product since launch has been the Full Regimen bundle ($140), so the products are resonating. But what's really been Isla's power, is what Dubb and Denton have been betting on from the start.

"Social media has changed so much in the last couple of months, and I do think that people really are craving these real moments and a bit of authenticity and transparency, and not in the way that Instagram has previously promoted authenticity, but in a real sort of moment of truth and honesty," said Dubb. "I think our brand and the way we're set up, and the way we kind of speak to some of the truths in the industry — whether it's our position on clean beauty, or our position on over-claiming — I think that's definitely been the one thing that people really are super excited about."

Learn more about the brand, its products, and their ingredients at isla-beauty.com.