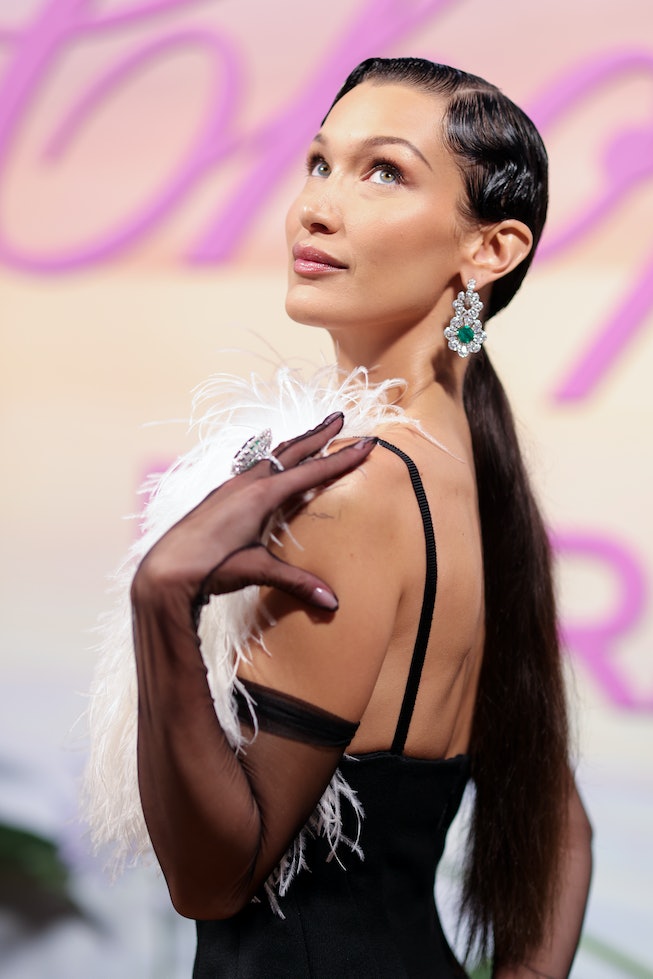 Bella Hadid is known for her blessed bone structure and angular features but one of her latest Instagram posts has inspired people on TikTok to try and recreate her sharp jawline with the help of highlighter. The post that inspired the trend is a series of group photos of the model celebrating her friend Alana O'Herlihy’s birthday in January. Bella wore a draped chocolate brown halter dress, side-swept up-do, and inner eyeliner. While the entire look caught the attention of the internet, it’s her jaw that’s made the most waves on TikTok. She literally glows, but it’s her jawline that’s in the spotlight.

Makeup artist Rachel OCool was the first person to try and recreate the makeup look on TikTok, posting a video using the perpetually sold out Charlotte Tilbury Beauty Light Wand highlighter along her jawline for a more defined look. “We're all seeing these amazing photos of Bella Hadid. But look at her jaw. The way her jawline is highlighted here just makes me think, can we recreate this with makeup,” she says at the start of the video. After attempting the blinding look, OCool continues: “There's something there. It's not perfect but there's something there... Or maybe you just have to be a rich supermodel”. It always helps.

OCool’s tutorial has inspired other makeup artists and Bella Hadid fans on the app to try jawline highlighter, with one person getting similar results using the e.l.f. Daily Dew Stick. Another video shows the technique not working. “I saw Bella Hadid with highlighter on her jaw so I wanted highlighter on my jaw,” the video was captioned.

After OCool’s video went viral, she collected suggestions from other members of TikTok’s beauty community and did a second attempt at the jaw highlighter look, posting a second video at the end of last week. This time around, she first subtly contours her jawline and blends that before applying a highlighting powder with a brush above the contour. OCool says people recommended using a glossy balm highlighter instead of a powder, although she didn’t have one handy for the video. But with proper angling mimicking Bella’s pose, the results look nearly identical.

With the new technique now TikTok approved, there’s nothing stopping you from trying Bella Hadid’s glowy jawline trick at home. However, as with all things makeup, it’s always best to tailor this makeup technique to accentuate your own jaw shape, rather than wishing it looked like a model on Instagram. Once you’ve mastered what works for you, you may want to post your own tutorial and share tips on TikTok—after all, the great jawline highlighter debate is still very much underway.