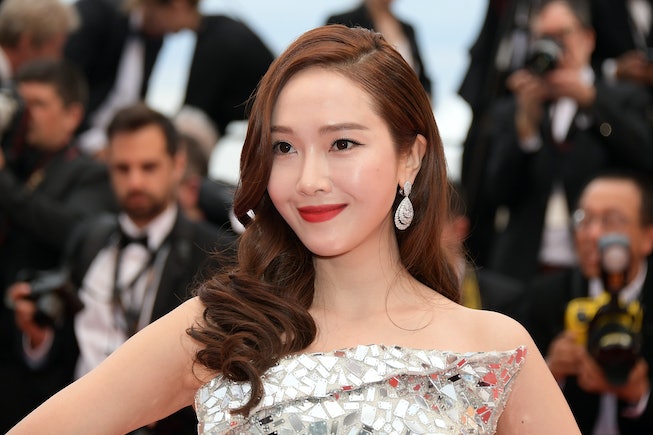 After working in music, fashion, film, and just about everything else, Jessica Jung is officially adding beauty ambassador to her already stacked résumé. On Thursday, April 30, Jung announced that she was selected as Revlon's newest global ambassador. A former member of the popular K-Pop group, Girls' Generation, Jung will now appear in Revlon advertorials around the world.

Sharing the news on its Instagram, Revlon joked about Jung's ability to "do it all." In an accompanying Instagram video, a highlight reel of Jung's career is played, interspersed with clips of her trying on various Revlon products. The beauty brand then shared a sneak peek at Jung's first campaign, which features the star donning berry-red lipstick.

Speaking with Allure about her new role, Jung expressed her excitement. "They really accepted me as who I am and what kind of person I am now. I can express myself, and I can be myself and be comfortable... They ask for my opinion, which never really happened in the past," she said.

Allure notes that Jung has been the face of other beauty advertorials in the past, but this gig will reportedly include additional responsibilities. During her interview, Jung reportedly revealed a secret — she's designing a line for Revlon.

There's no word on when the reported collaboration might arrive, but Revlon gave its full support to the newest member of its beauty family. “We were drawn to Jessica because she is a force of nature, channeling her positive energy and entrepreneurial mindset into achieving her goals and breaking boundaries all along the way,” Revlon Global Brand President Silvia Galfo said. “She loves to experiment with beauty and has an unapologetic spirit that helps her transcend convention.”