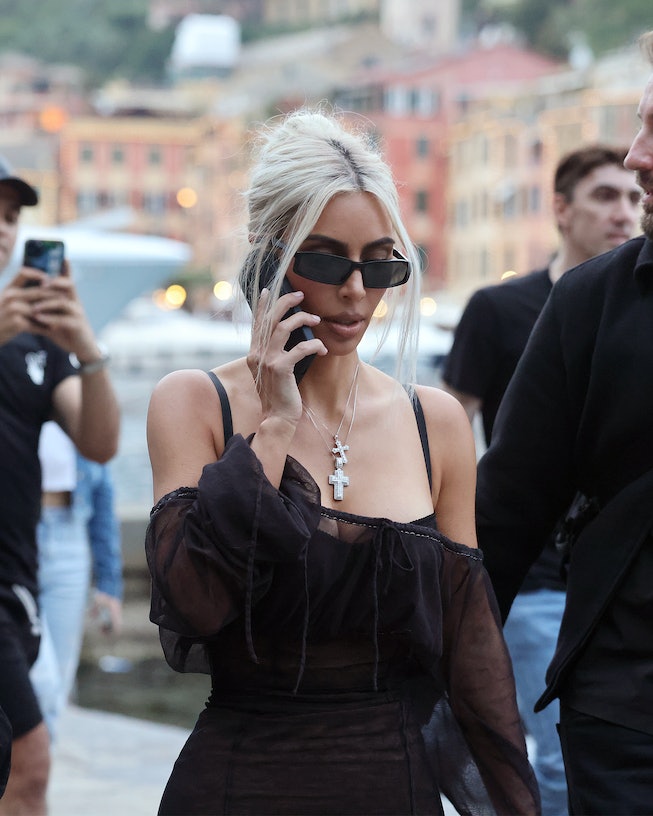 The Kardashians have been spoon-feeding us gothic wedding glam all weekend, in celebration of Kourtney and Travis Barker’s big day (and we’ve been loving every second of it), but yesterday, Sunday May 22, Kim Kardashian also wanted to share her excitement over her latest tattooed love. Posting a fresh pink manicure on her Instagram, Kim made sure we got a close-up of a finer nail art detail of the new set that we might have otherwise missed. Her springtime bright, pink gradient nails features a rhinestone letter “P” on her ring finger. It’s less permanent than Pete’s brand of Kim’s name on his chest or his “my girl is a lawyer” tattoo on his collarbone, both honoring his relationship, but a romantic gesture nonetheless from Kim.

Because it has less staying power (and involves less pain) than a tattoo, Kim’s rhinestone “P” manicure might just start a new wave of romantic tributes via nail art— especially considering other celebrity couples like Megan Fox and MGK have recently been showing up to events with coordinated nail looks and once even, a conjoined manicure. While Kim is yet to confirm the encrusted “P” is in reference to Pete, posting with a simple nail emoji as the caption, it’s clear she open to letting us speculate that she was missing the comedian and actor at Kourtney’s Italian fantasy wedding.

After her separation from Kanye, Kim has been in the process of a personal style update. She recently underwent a dramatic blonde hair change for the Met Gala, has channeled her inner goth for her sister’s wedding, and now enters new beauty territory by feed-posting her nail art. We have to say that we’re here for it. Usually opting for more neutral and rounded nails, Kim’s choice of a pink square-tipped manicure is fresh and fun for spring and reminds us all that simple nail art can often be the most impactful, and the most copied.

Kim isn’t the only Kardashian to choose a couple’s initials as inspiration for nail art; Kourtney and Travis Barker both painted each other’s initials on their thumbs in a black gothic font for the Met Gala. Clearly, inspired by the most celebrated celebrity marriage of the year, the whole Kardashian clan has invented an entirely new relationship status: nail art official.