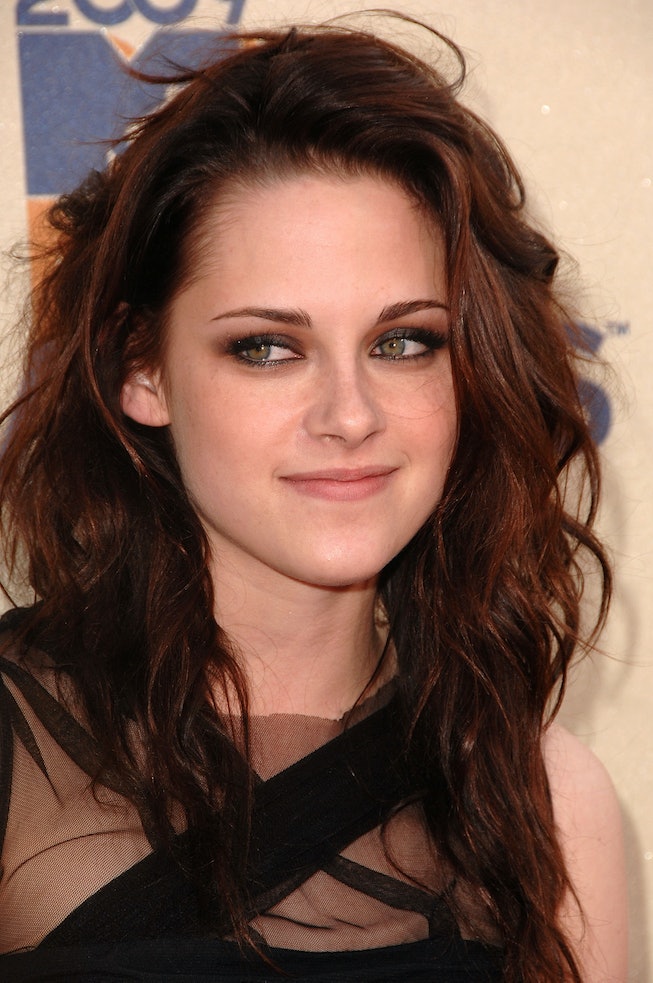 Before becoming an Angel or vampire, Kristen Stewart got her start as a child, starring alongside Jodie Foster in Panic Room. It's been nearly 20 years since that film was released, and in that time, Stewart has truly blazed her own path, starring in many feature films, and ruling every red carpet she walks on. Over time, Stewart has gone through a major beauty evolution, trying everything from a shaved head to a makeup routine with brows. Each one of her looks has been truly memorable, but in case you missed a single appearance from Stewart, this beauty evolution contains some of her hit looks.

After starring in the Twilight film franchise, Stewart became a household name, and with news of a new Twilight book, it's likely that many fans will be taking a look back. There's no word on whether this latest addition to the series will get a movie treatment, and whether Stewart will star, but it was during her days on the film that Stewart began branching out, experimenting with new beauty routines and more elegant looks with each event.

Years later and Stewart is still keen to try something new. While it appears that a good smoky eye will never go out of style for this star, there's also been moments of surprising color and lots of sparkle. The actor's red carpet beauty routines have always kept fans guessing, and with Stewart currently working on an upcoming queer-focused holiday rom-com, it's likely you'll see more of her signature style soon. Until then, scroll through 22 moments from Stewart's beauty evolution.

Relatively bare-faced — aside from some blush here, mascara there — through most of her off-screen appearances before Twilight, Stewart spent most of 2007 as a blonde.

In the months following the release of Twilight, Stewart, along with her signature edgy style became a fixture of red carpets. This look featured the first glimpse at a tradition of wearing smoky, lined eyes to events.

Although much of Stewart's hair was pulled back into an intricate updo that featured braids, a few pieces were left out to frame her face. She wore the hair with a soft shade of pink eyeshadow a glossy lip.

A bright red lip was paired with an elegant, pulled back ponytail.

May 2016, Met Gala: "Manus x Machina: Fashion In An Age Of Technology"

Stewart packed on the shimmer for the 2016 Met Gala.

Texturized blonde curls and a bright red lip were the focal point of this beauty routine.

Stewart surprised fans with this shaved hairstyle. Despite the edgy hairdo, she kept things light with her makeup, wearing a shade of pink eyeshadow.

The bleached tips featured in this 2017 look gave major '90s vibes. Also of note was Stewart's eyeshadow, which was a deep shade of red shimmer that matched her dress.

Stewart channeled her inner punk rocker with a two-toned mullet and her signature black liner.

May 2018, Everybody Knows Screening

Stewart wore her closely-cut curls in a sweeping, romantic look that layered pieces atop her head.

This look — featuring extended bangs and a dark eye — was truly one to remember.

Never one to shy away from dramatic eye makeup, Stewart wore blue-green liner with an orange-red lip.

Fully embracing the 2019 Met Gala theme, Stewart debuted bleached hair with bright orange ends. She matched the look to her makeup that featured colorful lines intended to serve as brows.

Stewart's hair showed crunchy texture, and she wore it parted to one side. For her eye makeup, she matched her evening's dress, and wore pink shadow that extended out into wings.

Eye wings don't always have to be straight and narrow. Stewart turned her liner into a chunky circle at the corner of her eye.

Wearing much of her hair slicked to one side, Stewart again wore a dramatic smoky eye, but this time, it was a shade of blue.

Choosing a can't miss shade of red, Stewart coated much of her lid in a bright red eyeshadow.

In addition to a surprise slicked back style, Stewart lined her bottom lines with a shade of red liner.

Stewart wore her bleached hair in a short, shaggy style. She also chose an intense black eye wing that nearly extended to her brows.

Stewart was spotted with a neutral palette, wearing a shade of peach blush and coordinating eyeshadow.