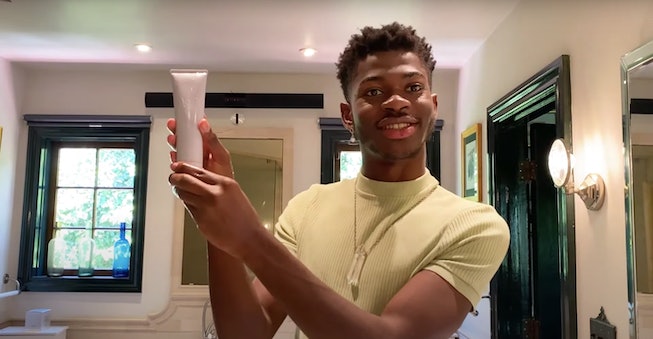 The beauty YouTube community has welcomed a new, and very famous member. Lil Nas X swapped out his chart-topping hits and Twitter memes for skincare, appearing in a new video that chronicles his complete Fenty Skin routine.

While beauty YouTube tutorials are often lengthy, and seemingly impossible to ever correctly replicate, Lil Nas X provided a truly foolproof regimen. His entire video clocks in at just under a minute, and he only uses three products. As an added bonus, he even makes time to mention which of the products he thinks smells best.

Casually introducing himself as a Fenty Skin model, Lil Nas X begins with the brand's TotalCleans'r Remove-It-All Cleanser. Always keeping the viewer at home in mind, Lil Nas X demonstrates how he rinses off the cleanser, and pats his skin dry before moving on to applying the Fat Water Pore-Refining Toner Serum. For his final product, which he says is "last, but not least," Lil Nas X applied the Hydra Vizor Invisible Moisturizer Broad Spectrum SPF 30 Sunscreen. After rubbing the sunscreen thoroughly into his skin, Lil Nas X takes one quick look in the mirror, before proclaiming, "Amazing, right?"

There's been no official word on whether Lil Nas X intends to create his own YouTube channel of beauty content, but his debut has already influenced the people. "Points were made!!! lemme go get me some fentyskin," one Instagram follower wrote.

See the video for yourself, below.