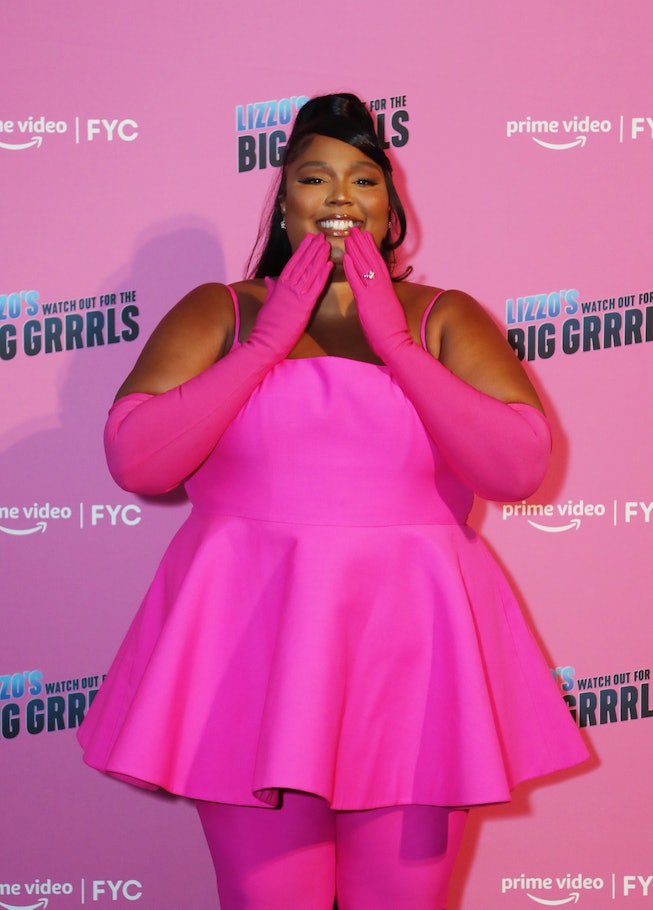 Berries are such a staple in warmer weather that it seems Lizzo is channeling them with her hair this summer. Posting a dancing video yesterday, followed by a series of selfies, the pop star debuted new neon strawberry pink long hair with bouncy curls. Captioning the post simply with “💖💖💖” (emojis that match her new hair color, of course), Lizzo paired the hair reveal with pink lipstick and darker berry lipliner and a white t-shirt with an airbrushed pink heart design.

On TikTok, Lizzo posted a hair-flicking video with the caption “I like my hair today.” Fans have already approved of the change, with one commenting “omg the hair I love it ahhh slayyy girl.” “That hair is giving strawberry shortcake I love it,” wrote another. Lizzo also posted a photoshoot with a voluminous pink wig in April and has experimented with purple hair before that.

The hair change comes after a controversial week for the artist, who re-released her new song “Grrrls” on Monday after being called out for using a derogatory term for people with disabilities. Releasing a statement on Instagram, the musician said that she understood the effects of harmful language. “Let me make one thing clear: I never want to promote derogatory language. As a fat black woman in America, I’ve had many hurtful words used against me so I understand the power that words can have.” Alongside hair compliments, fans are praising Lizzo on social media for taking swift action to release a new version of the song.

Lizzo is clearly a fan of the color pink, wearing an all-pink outfit to the premiere of Prime Video’s "Lizzo's Watch Out For The Big Grrrls" and a furry pink jacket for her Coachella performance with Harry Styles (who also wore all pink). Her Coachella outfit even topped off the look with fluro pink eyeshadow. With new bright pink hair, we can’t wait to see how Lizzo further elevates what is becoming her signature monochromatic outfit choice. While her captions suggest the change is only temporary, we’re keeping our fingers crossed that Lizzo channels our favorite color all summer long.

NEXT UP
Beauty
Bella Hadid’s Clip-less Updo Is Going Viral On TikTok
Beauty
Megan Fox Is Completely Transformed By A New Blonde Bob
Beauty
Kylie Jenner Is Bringing 1920 Finger Waves to the 2020s
Beauty
Dua Lipa’s ’90s Updo Is Hair Inspo For Your Next Night Out
Style + Culture, delivered straight to your inbox.