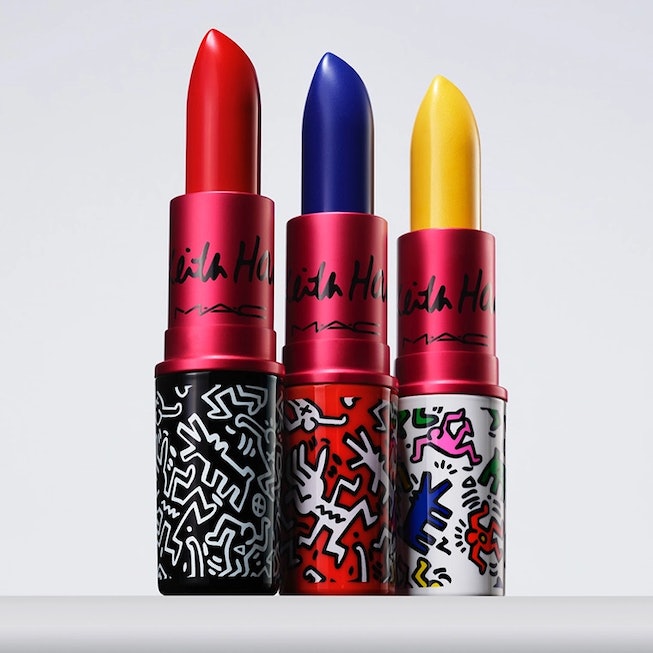 When MAC launched its first Viva Glam lipstick 1994, HIV/AIDS was the the leading cause of death for all Americans ages 25 to 44. The country, at the time, felt bleak. “The disease robbed the world of 15 to 20 years of creative spirits, energy, and souls” says John Demsey, president of MAC at the time, who now serves as executive group president of Estée Lauder Group. The brand’s first Viva Glam lipstick — a bright cerulean shade created by MAC co-founder Frank Toskan — was announced in conjunction with the MAC AIDS Fund and the promise that 100% of proceeds of Viva Glam would go towards the fund to help fight HIV/AIDS. Since then, MAC has released a new Viva Glam lipstick each year, each in collaboration with a cultural icon who represents the spirit and giving-back element of the cause, from RuPaul to Miley Cyrus. Since 1994, the brand has raised over half a billion dollars for the fund.

This year, however, marks a first. On its 27th anniversary, MAC just announced a new Viva Glam partnership with the late artist Keith Haring. “[MAC Creative Director Drew Elliot and I were] talking about the eighties and when HIV/AIDS became so much part of great sadness, and at the same time, a great unifier of like-minded individuals getting behind something,” says Demsey. “We talked about those who walked those halls back then, and one of those people was Keith Haring — an iconic artist who died of HIV/AIDS, and whose designs and graffiti art have become synonymous with that period of time and have transcended the ages.” The brand collaborated with Keith Haring Studio on the new Viva Glam collection, which features three new lipsticks in red, blue and yellow (“like a New York taxi cab,” says Demsey), inspired by Haring’s penchant for bright, primary colors.

The packaging is emblazoned with some of Haring’s most recognizable original motifs, and the campaign was shot to reflect the club kid attitude of the late ‘90s. When asked how Keith Haring Studio responded when MAC reached out to collaborate, Demsey says the response was “instantaneous.” He notes: “Sometimes, the things that happen most organically or easily are the things that are right.”

An interesting parallel emerges when you look at the state of the world today, grappling with a virus taking the lives of thousands, and the HIV/AIDS crisis of the ‘90s. It’s part of the reason $10 million from the Viva Glam fund was donated to 12 original MAC direct services organizations in the UK and the United States at the start of the pandemic. “Those food kitchens and those healthcare providers are the same people that are helping all the people with COVID who are unable to take care of themselves,” says Demsey.

Though many beauty companies these days have charitable elements, the Viva Glam fund has always felt personal and authentic to MAC’s core ethos of community and giving back. “I like to think that the founders of MAC, the artists, and the brand itself have always behaved as first responders, and first responders as a community coming together to do something meaningful and to make a difference,” says Demsey. “This new collection is our nod back to where we come from and we’re using it, face forward, to project a brighter future.”

Here’s to another 27 years of Viva Glam.