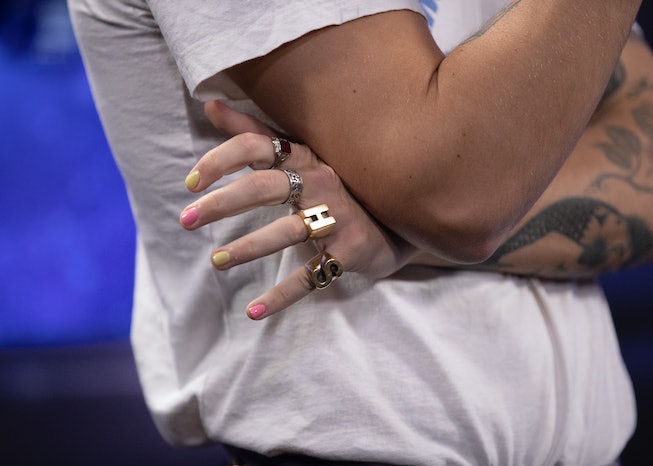 Harry Styles just launched his new boundary-blurring beauty line, Pleasing this week and made the first products available for preorder and it’s already having a major effect. One of which is, the launch has resulted in an uptick in interest in men’s manicures. Since the announcement and first look at the pearlescent nail polish range, online beauty retailer LookFantastic has reported a 457% increase in searches for “male manicure designs”. There’s also been a 3,329% search increase for “easy male nail art”.

Even before the brand’s launch, Harry was already known and praised for his creative manicures, including fruit-themed ones, mismatched nails, and the bright pink manicure featured in his music video for summer bop, Watermelon Sugar. LookFantastic says the search term ‘’Harry Styles nails’’ alone gets an average of 40,500 searches a month. Harry is just one of many male celebrities getting into nail art these days. Over the years, Kurt Cobain, David Bowie, ASAP Rocky, Lil Yachty, and Pete Davidson have all rocked nail polish.

With searches on the rise, male manicures are set to be a major trend through the rest of the year and into 2022 as men in nail polish becomes even more normalized. While there are no rules when it comes to nail art (for anyone), if you’re seeking easy design inspiration, read on for the nail art ideas that are trending the most for men. Here’s hoping that the growing popularity will also inspire more men to try nail polish and continue to break down previous boundaries around beauty products and masculinity.

Black nail polish is a classic (and a little goth) entryway into the world of male manicures. Harry himself often wears black nail polish as a part of his mismatched manicures, including his iconic Met Gala look in 2019. That’s probably also why Pleasing has a dark polish named Inky Pearl, which is a pearlescent black blue.

Interest in smiley manicures has seen a huge resurgence in recent months, with searches for “smiley face nail designs’ up by 550%. Harry himself sported yellow smiley face nails for a Guardian shoot. The sparse design is an easy first nail art design that only requires two colors and a little patience

With a recent 376% search increase, “flame nails” are once again trending for men. They’re a simple statement nail design that brings the heat.