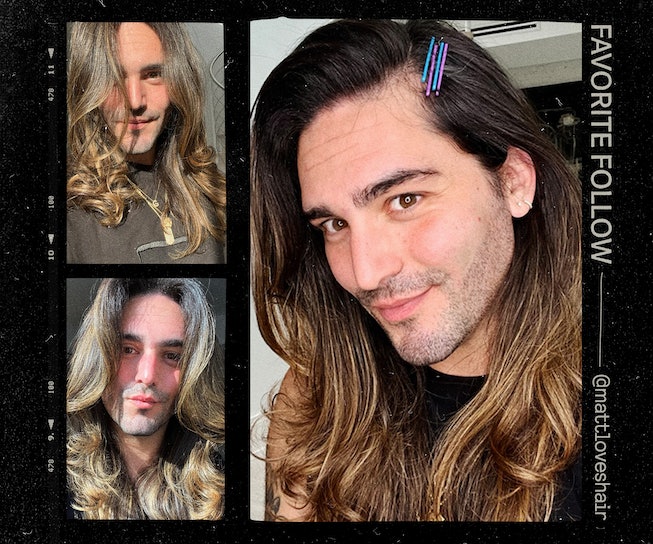 Last month, Matthew Newman—also known as @loveshair on TikTok to his 1.2 million followers—posted a hair blowdrying roadmap. "Do the bottom sections sleek, give the middle a twist and a bent, and on the top, everything goes straight up," he said in the video. The genius of the video, and thus its mass appeal, was that it was quick and simple and made much more sense than so many much longer tutorials. It went viral on the app and now has over 15 million views and counting. But, this was far from being Matt’s first blowout tutorial. The New York hairdresser has been cementing himself as one of TikTok’s go-to hair tutorial content creators over the past two years, using his own long, glossy locks in each tutorial.

Before TikTok, Matt worked in the hair industry in New York for over 10 years, with a career that took him behind the scenes at editorial shoots and fashion shows around the world. He now uses that high-level industry knowledge to simplify haircare for his growing audience, testing new products and sharing hacks like using floss for sleek hair. Throughout his array of tips and equipment, Matt’s excited expressions (including his signature mouth-agape face) and knack for sharing cute styles that keep your hair health in mind have only added to his popularity.

Below, Matt talks to NYLON about his rise to TikTok virality and why we’re all so obsessed with the ’90s supermodel blowout right now.

ON FALLING IN LOVE WITH HAIR CARE

“I grew my hair out when I was a teenager and then, in college, I started letting my hair grow long and I didn’t know how to do anything to it. I had this boyfriend at the time who also had really long hair and he would always take care of my hair. He was planning on going to beauty school but never did and I was always jealous of it. I thought I couldn't go to beauty school cause I was in college but once I finished, I just thought, ‘you know what, let’s just do it’ and I signed up for beauty school.”

ON BUILDING A TIKTOK FOLLOWING

“I did not skyrocket overnight on TikTok. In fact, I was not a big social media person before the lockdowns. But during that time I posted a cute video of my neighbors attempting and failing to record themselves going the “Savage” dance and it got a few million views. I thought that was the coolest thing ever. I had never really had faith in Instagram but that video made me realize that I could actually grow an audience on TikTok. My boyfriend told me to post hair videos and I was like, why didn't I ever think of that?

ON BLOWOUTS COMING BACK

“Everyone right now is really into that ’90 supermodel vibe and so the hair that goes with it is back, too. But I used to work at a Dry Bar and people have always wanted to know the secret to the perfect blowout. It’s customizable to your haircut and looks different for everyone. A blowout makes everything feel good.”

“Straight up, butterfly clips are just back now. They’ve gone past the point of being ironic and are full-blown, in the mix again. I like that, but I definitely was not expecting that. My go-to tip for them is that it’s easier to set a style and clip them on top and use them for the aesthetic rather than to actually hold the hair. So if you wanna do little buns, put them on as a detail, and if you wanna use the ones with the little twisty backs, you can even start with a bobby pin or elastic first.”

ON HOW HIS OWN HAIR MAINTENANCE

“My own hair takes a bit of a beating while creating content so I try to minimize it by always using a heat protector. I always have tons of product on my hair and use silk hair scrunchies instead of regular hair ties. I try not to use any of those little tiny elastic hairstyles that are popular right now— I’m not getting in that mess because they are so hard on your hair. Although, I do have an idea for LA Pride involving two little teeny bubble braids in the front with rainbow rubber bands going down. That’s going to be my one exception using them this summer.”

“I try to avoid terms like ‘clean beauty’ altogether, but I’ve hated seeing the ‘clean girl makeup’ trend. It reminds me of a time in the gay world when people would ask ‘are you clean or not?’ when talking about HIV. I think I grew up seeing the backlash to that and thinking about how it’s wrong to say anything is not clean. I believe in silicone in hair products, I believe in beauty products. They’re not dirty and not only doing minimal makeup and slicking your hair back doesn’t make you dirty either.”