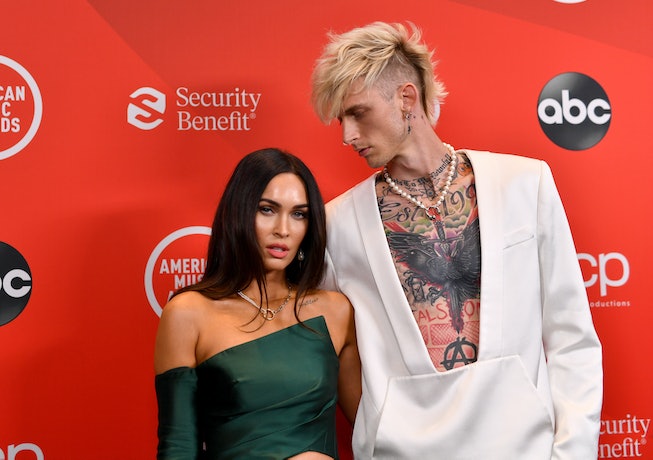 Celebrities brought their best and brightest beauty routines to the 2020 American Music Awards, but it was only Megan Fox and Machine Gun Kelly that partook in a matching moment. Although you might have missed it upon first glance, the couple made their red carpet debut with coordinating minimal, geometric manicures.

The tastefully tiny nail work was completed by Brittney Boyce, founder of NAILSOFLA, and she used entirely ORLY products, meaning this is a look you can easily recreate without breaking the bank. As the brand explained of the look in a press release, both manicures featured bright half circles on a neutral nail, along with a single black line.

Choosing different colors for their manicures — Fox went with a coral-orange and Machine Gun Kelly went with bright pink — the two intended to use the look as a means of throwing it back to an earlier point in their relationship. As ORLY revealed in its email, the couple wore matching manicures before, and they wanted to continue the tradition for their first red carpet together.

Sharing a product breakdown, Boyce revealed that Fox's manicure had featured the addition of length via gel extensions. Both used the same neutral-colored base, but varied their half circles in color. Each mani was finished off with a protective top coat, and then Boyce added the lines with a thin brush coated the dark black coloring. For the finishing product, Boyce added additional top coat to only the stripe, giving the nail a glossy, surprise finish.

Get a closer look at the matching mani moment in an image provided by ORLY, above, and keep scrolling for the products needed to create MGK's bright pink mani.