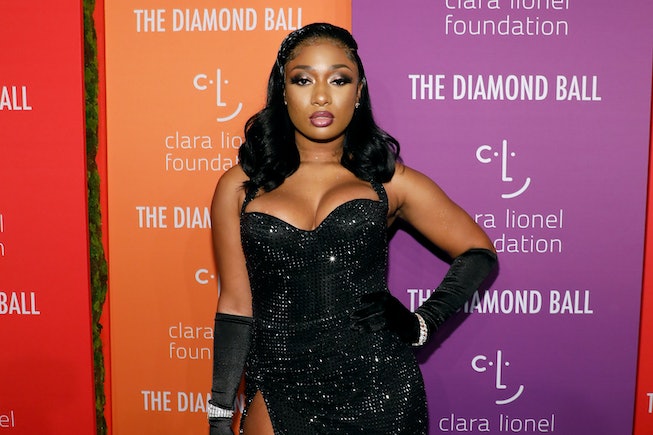 After partaking in and setting a number of beauty trends, Megan Thee Stallion pulled some devilish inspiration for a new look. During a recent period of "werkin," the performer shared a photo, which presumably came from a recent set. While her last look was inspired by toy stores and nostalgia, the Friday, February 19 makeup didn't exactly pull from anything quite as innocent.

Seated in a deep purple throne, Thee Stallion posed for a selfie in devil-inspired makeup. For the look, her face was covered in red, and she appeared to have also painted her body, wearing what looked to be a red top covered in crystals. Over on Twitter, she shared a second image in the makeup, writing, "Demon Time."

Along with the red face coloring, she wore red eye makeup, adding a touch of black to outline the corners. She coordinated her eyes with her lips, and posed in a shade of bright red lipstick, with an outline of darker red lip liner.

Although her hair didn't receive the same red color treatment, it was styled and pulled up into two small horns. The hair horns were paired with a blunt bang, and what looked to be a ponytail.

There's no word on what Meg was wearing the outfit for, but some on social media have speculated that she was on the set of HBO Max's Legendary. Thee Stallion hasn't yet confirmed the reports, but fans should know soon enough, as the series was previously renewed for a second season, and Megan was confirmed to return as a judge.

Check out her look, below.