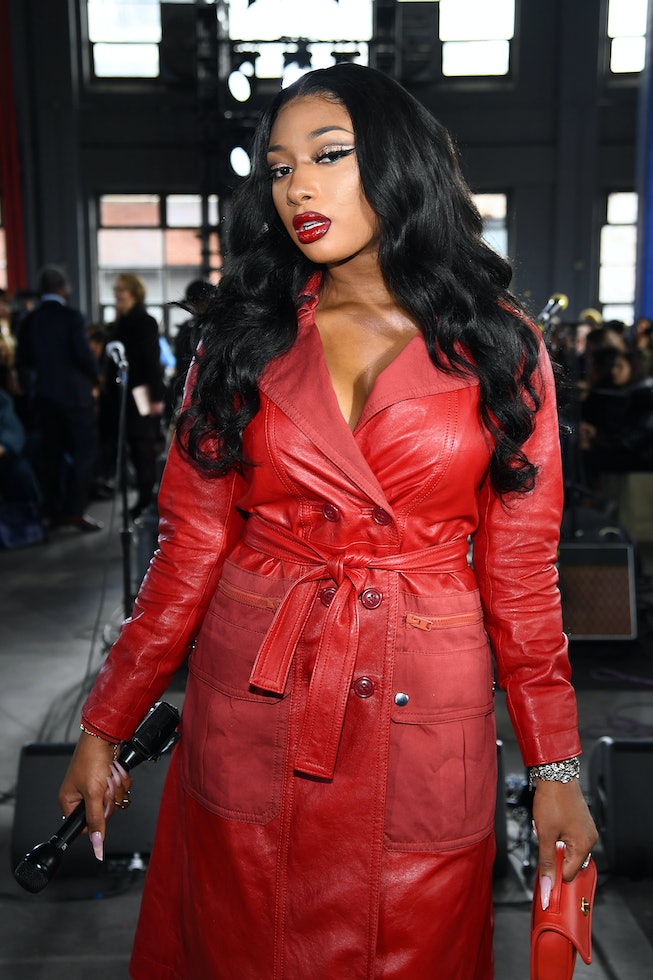 Photo by Dimitrios Kambouris/Getty Images for NYFW: The Shows

Hot girl fall is underway, and it's already filled with trendy beauty looks. Working with an impressive glam squad on Wednesday, October 7, Megan Thee Stallion shared a peek at her latest look.

Posting a few selfies on Instagram, Thee Stallion gave followers a glimpse at a beauty routine that included floating eyeliner and '90s-inspired tendril bangs. "Y’all know I loveee to do my own makeup but today @priscillaono killed it," she captioned an Instagram photo.

The day's glam, which included makeup by Ono, hair by Kellon Deryck, and nails by Coca Michelle, took its cue from the colors of fall. For the eye makeup, the rapper was given a sharp black eye wing and long lashes. Colorful foil was then placed at the corner of her eye, and it continued along her crease. On her Instagram Story, Ono confirmed she used a product from Face Lace to create the look.

Ono also gave Thee Stallion some gloss, and her lips were lined with a shade of brown-red product. In the photo shared by Ono, you could also make out Thee Stallion's nails, which featured a denim blue tip.

For her hair, Thee Stallion was given two tendrils bangs on either side. Parted down the middle, the bangs gave way to a long braid, which ran down the length of her back. In one video, her tendrils appeared to be curled at the end, and she paired the hairstyle with a pair of oversized hoop earrings.

Wednesday's look remains just an Instagram sneak peek for now, but it's likely that fans will get a fuller glimpse at the whole picture soon. Fashion Nova shared a few videos and a photo to its Instagram Story, seemingly hinting that Thee Stallion was working on a photoshoot related to her upcoming collaboration.