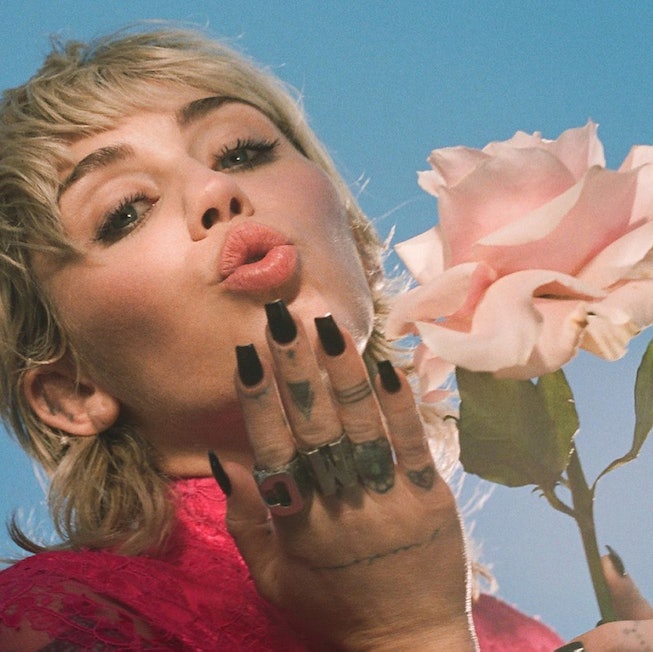 After giving us a sneak peek last month, Miley Cyrus’s new Gucci Flora Gorgeous Gardenia Eau de Parfum campaign is out, and it’s as dreamy as we could have hoped.

The campaign video follows Miley into a candy pink #FloraFantasy where she can be her full (cartoon) self. Naturally, this includes a pink cottage, perfectly groomed poodles, and playing electric guitar on the beach. Her (now signature) blonde, wavy mullet only adds to the nostalgic feel.

The campaign was shot and directed by Petra Collins, who’s known for her creating dreamlike work from the feminine gaze. The aesthetic is clear as Miley dances through a candy-colored wonderland, complete with human-sized flowers. Miley herself also sings “Delicious”, the upbeat backing track for the campaign with her rock and roll tinged vocals.

The fragrance was inspired by the idea of mystical powers. Reimagined in creative director of Gucci Alessandro Michele’s vision, it’s a modern reinterpretation of the white gardenia note with pear blossom accord and blended with jasmine grandiflorum. The bottle, like the video, is pink and floral fanciful perfection. “Fragrances are explorations and flowers, in particular, represent a world of infinite possibilities,” says Michele.

Since Gucci’s Flora Fantasy world is filled only with cute fluffy animals, flowers, and Miley Cyrus, we’re eager to visit as soon as possible. Thankfully, we won’t have to wait too long. Gucci Flora Gorgeous Gardenia Eau de Parfum will be available in the US beginning in August exclusively at Sephora, and available nationally in October.