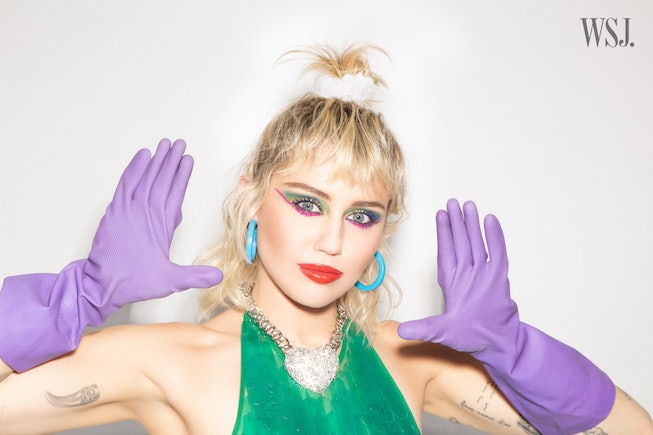 In what might be the most relatable news out of quarantine, Miley Cyrus revealed she's not exactly focused on washing her hair. Near the start of social distancing, Cyrus started hosting a daily IGTV Live show. The celebrity-filled affair was one to watch, but as Cyrus shared in a recent interview, there were only two Bright Minded guests that she took the time to wash her hair for.

The show, which featured special appearances from Demi Lovato, Hailey Bieber, and Reese Witherspoon, was booked mostly through Instagram DMs, and aired daily for a period of time. While hobnobbing with celebs and politicians isn't exactly an ordinary task, Cyrus explained in an interview with WSJ. Magazine that she didn't bother to primp for every guest that passed through via camera. "I've only washed my hair twice for the show: once for Elton John and once for Senator [Elizabeth] Warren," she said.

Also of note, Cyrus even changed up her wardrobe for Warren, telling the magazine that she was particularly nervous for that chat. "With Elizabeth Warren, I was so nervous I even put on a nice linen blouse. I don’t even own a friggin’ blouse! Everything in my closets is studded or leather or latex, honey. So I’m going through my damn closet, like, 'What am I going to wear to interview the friggin’ senator?' That was my main stress, of course," she said.

Luckily, her interviews, and her outfits, went off without a hitch, and while the series has since concluded, episodes live on in Cyrus's Instagram archives. As for what she's wearing when she's not taking on hosting duties, Cyrus said she's rocking a top knot and sweats, "just like everyone else."

Below, check out some of the glam she wore for her WSJ. Magazine cover.