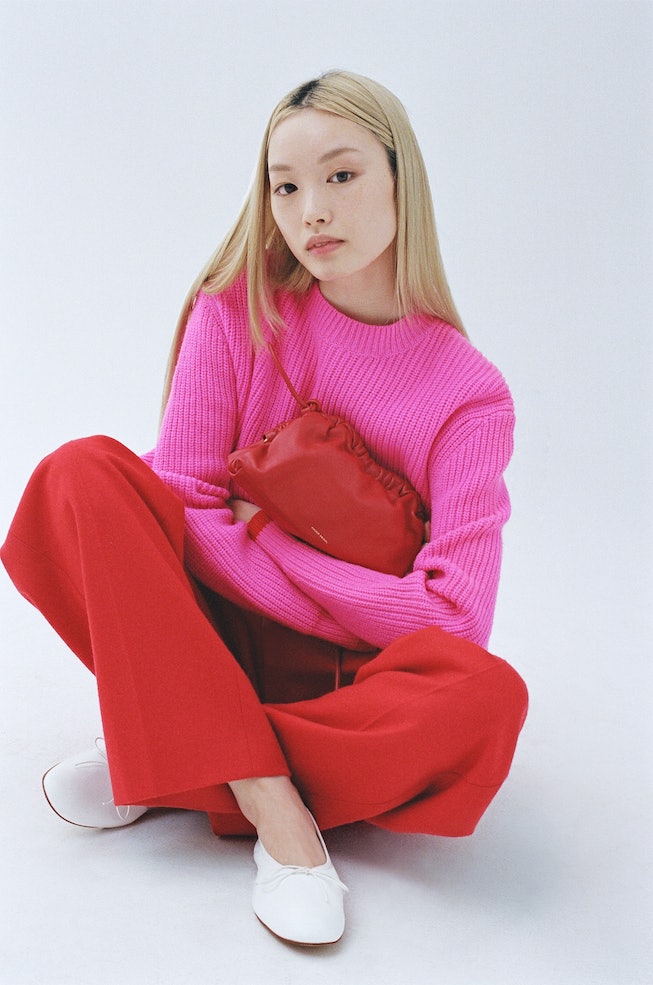 If this year has revealed anything about the brands we choose to buy from or the influencers we follow, its that people expect honesty — and they want to see the real world reflected in what they consume. For its fall/winter 2020 campaign, modern luxury brand Mansur Gavriel leaned right into that truth, enlisting a group of six powerfully relevant, "non-conformist" changemakers across a vast range of ethnicities, identities, and industries to celebrate its latest offerings, and to end this tumultuous year on a hopeful note.

Amongst its campaign stars is Australian-born Chinese model Fernanda Ly, a 23-year old cool girl who you've probably seen over the years in a rotating number of electrifying hair colors, including her now iconic like hot pink look. Joining this campaign amongst the likes of trans model and LGBTQ rights activist Jari Jones, founding members of the all-girl skate crew The Skate Kitchen, Brenn & Jules Lorenzo, and supermodel and activist Dilone — a personal friend of Ly's, who she looks up to as a role model — is something she feels grateful for, calling it an something of an honor over the phone ahead of the campaign launch.

The honor feels greater having been given to Ly this year in particular as she, like the rest of the world, has had to learn how to re-navigate life in our new reality. She's distanced herself from people and brands who aren't standing up for what is right, she's embarked on a new project — a new YouTube channel! — and she's figuring out how to share her light with as many people as possible. Check out the highlights of Ly's conversation with NYLON, below.

What was your relationship to beauty like when you were growing up?

I didn't have really great skin and I'm very sensitive to a lot of things. I was always needing to get prescription stuff and being really careful on what I use on my skin. So I still follow through with that even now that I've got eczema and all that. And so I've always just been careful what I do with my skin and beauty.

How have you learned to navigate around those insecurities as you've grown?

Going to a derm for the past two years, she's been absolutely amazing because truly all my acne cleared up. All of my eczema and rosacea cleared up as well, and it feels really relieving to not have to worry about what's on my face or what a makeup artist thinks about me as I sit in the chair.

Where do you go to get your beauty inspiration?

I dig into anime and manga, that kind of stuff. Ever since I was a kid, I feel like it's always in my head since then, and I've been really into just like magical girls, like Sailor Moon and that kind of stuff. I really like all of those things. I kind of enjoy [the] writing and just over time it's really influenced my look.

Can you run us through your beauty routine during quarantine?

My dermatologist has me using just a cleanser and a cream. I've been really into taking baths because I feel like I can just chill out and not think about anything serious. I mean, I think right now that's sort of something that everyone needs to do.

Do you have any particular process for your hair? I feel like it's always different colors.

That's literally the next thing I'm going to upload [to YouTube] this week. It's a lot of trial and error. I've been dyeing my hair for more than 10 years now. It's sort of crazy that it's been so long and now it's just like second nature. You just have to put in the time and use the right products and just know that eventually you just might not have any hair and accept that damage is a thing. It happens; I've had to cut a lot of hair off, but it grows back.

You also started a YouTube channel at the beginning of quarantine, which is really fun, and shows your love of beauty and anime already. What do you plan to explore there, and how do you think it'll set you apart from all the other creators on the platform?

I was hoping that during the fashion week, everything would be safe, but unfortunately that wasn't the case because I want to be able to show people, I guess, what a model actually does for the job. You don't really get to see the true behind the scenes. I feel like not many people are able to share that. Hopefully one day I'll be able to share that kind of stuff. But in the meantime, I'm just sharing things that I enjoy and just getting to know the people that follow me because they've supported me for a really long time now.

Speaking of what you're doing in the meantime, how has quarantine been for you in general?

Originally? It was really hard to get myself to keep going because normally I'm a homebody, but knowing that I don't have a choice to go outside makes me sort of want to go outside. I've been looking for a new hobby. I actually picked up crochet recently and that's really fun. I'm like the kind of person who enjoys making things physically, it's really satisfying. And then, my YouTube channel and stuff is a different experience to be on the other side of the other project, instead of me just in front of the camera, I can control every aspect of it. That's taking up a lot of my time as well.

You've been in the business for a long time and you're still growing a significant following on new platforms like YouTube. How has it been growing up knowing that people are kind of watching you?

It's totally weird because people comment about things that I mentioned a really long time ago, that I said without thinking, and apparently it's affected them for a lot of their life. It's sort of shocking that something that I can say holds so much weight on other people. And it's just made me aware of, I guess, the influence that I have on other people. And I want to be able to use that for good.

In the beginning, it was really overwhelming. For the first two, three years I didn't say anything; even my Instagram and stuff was just completely blank. I was just really nervous to show my true thoughts or show who I really was. But then I managed to get rid of that and now I enjoy being who I am.

Let's talk about your Mansur Gavriel campaign — it's so stunning and something new, aesthetically, from the brand, while focusing on all of these diverse, young changemakers and how they're making a difference. Why did it feel important to you to be involved?

With quarantine and just how severe the coronavirus has gotten, I've seen the true face of a lot of people out there, especially people I thought where my friends. Now their true self has been revealed and I don't really want to associate myself with people, or brands that I don't believe in. I really enjoy Mansur Gavriel's message, which is all about being inclusive and [for] positive change. One of my friends is actually in the campaign as well, Dilone. She's so amazing. Everything that she talks about, everything that she believes in, I really love that. It's sort of like an honor, because I feel like I didn't really do anything in comparison to them.

I hope that everyone can sort of see that they can be their true selves and that fashion is a way for you to just express who you are. Modeling gives me the chance to do that. And I hope people can feel that you don't have to hold yourself back, especially through your clothing.