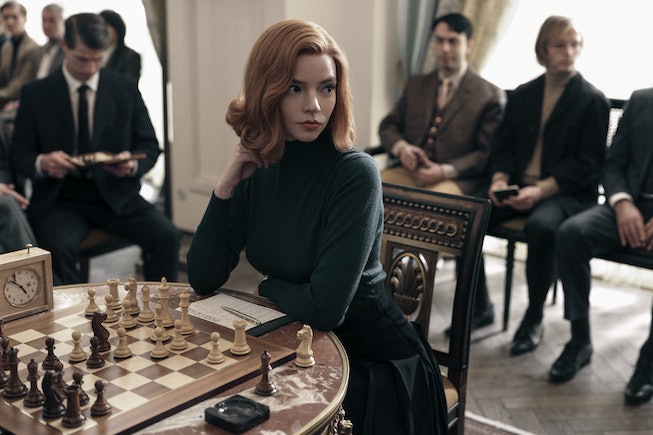 After traversing through Paris with Emily, Netflix fans are now enamored with The Queen's Gambit, and the game of chess is officially glamorous. The fictional tale, centered on chess prodigy Beth Harmon, played by Anya Taylor-Joy, has garnered universal praise, and as much as social media seems to love the dramatic series, many are captivated by the show's depiction of late 1950's beauty routines.

The series follows Harmon from childhood through adulthood, and with the gripping tale of growth and talent comes a purposeful change in appearance. As much as the series focuses on chess, it also used beauty as a means of telling a complete story. "Hair and makeup help depicts the character," Daniel Parker, the show's hair and makeup designer told NYLON. "I always considered myself a prop man to the face, head, and body. Along with costume, I enable the actor to help produce the performance and the character they want to give. The hair and makeup in this series was vitally important."

Viewers are first introduced to Harmon as a young child, played by actor, Isla Johnston. Opening with Harmon's life in an orphanage, The Queen's Gambit follows Harmon into adulthood, and beauty played a critical role in reflecting the character's journey. When the show opens, Parker made the decision to give the young character a very severe looking haircut. "I wanted to cut off that long hair, and to make it this kind of mini pageboy, loose with a short, cropped fringe," he said. The pageboy style stays with the character up until she's an adult, and it's reflective of her growing pains.

Along with special attention to styling, Parker made a critical choice on coloring. He told NYLON that he always knew that Harmon should be a redhead, and he settled on a variation of the color that conveyed glamor and power. As Taylor-Joy is a natural blonde, she was given a wig for the show.

Going with three to four major looks for Harmon throughout the series, Parker based the beauty routines on research and popular looks of the time. Most of the beauty inspiration for the show's central character came from actress Natalie Wood, and other glamorous movie stars of the '50s and '60s. "All of the looks had a name," he said. "We went from a look called sex kitten, because it was very cute, to eventually drop dead gorgeous, which is the very last look."

As Harmon rises and falls in the chess world, her beauty routines reflect that, and at one point, when the character reaches her lowest, she ditches her usual glamour for a rockstar-inspired look that required some work. In one scene, the character is captured watching the music video for Shocking Blue's single "Venus." The music video inspires Harmon to change up her eyeliner, and as Parker shared, the impulsive look came required an unusual makeup technique. "She copies the makeup, but does so really badly," he said. "I found that very difficult, to do makeup badly, and the first time I did it, I decided it was too good. She went as bad as I was willing to go, and we had some fun with it."

Parker balanced both beauty and power throughout the series, and at its conclusion, viewers are left with a final, lasting impression of Harmon, and her growth as a character. According to Parker, that look was among the show's key moments. "The last shot of the whole series is a massive closeup on Beth," Parker noted. "It's all about power and charm. This is a very charming woman. She's become charming, but she's become powerful. That last shot is exquisite, because it tells you so much. One look from Anya, and it tells you everything."