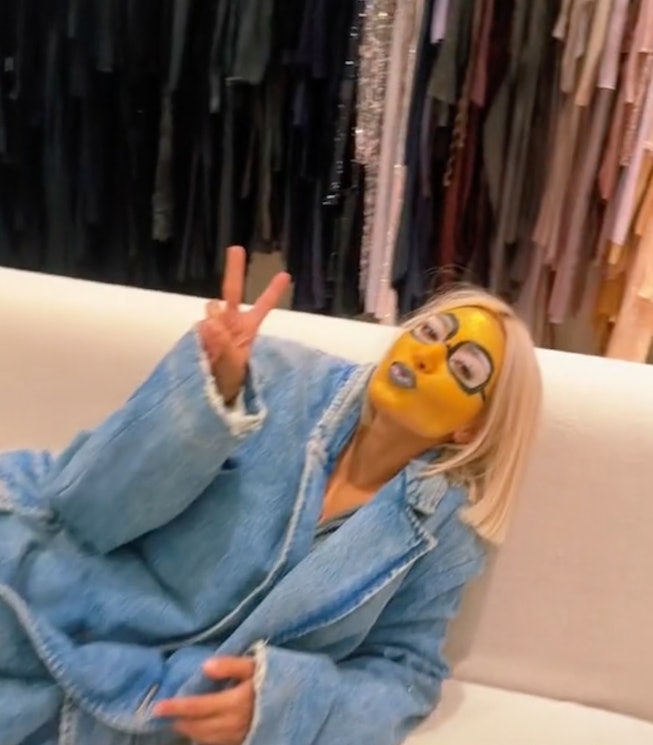 If you haven’t seen Minions: The Rise of Gru yet, chances are you’re still well aware that the new movie is now showing in theaters. From the “gentle minions” trend where moviegoers wear suits for the occasion to minion makeover videos, social media has been full of references to the tiny yellow henchmen. Now, North West and mother Kim Kardashian have gotten in on the Minion makeup trend—with North transforming Kim into an almost unrecognizable yellow creature with her makeup artistry skills.

The video was posted on North and Kim’s joint TikTok account yesterday, with the caption “💛MOMMY MINION 💛”. In the TikTok video, North uses multiple eyeshadow palettes to transform her mother into a minion—goggles and all. She starts with a pale white foundation, painting it all over Kim’s face until she has a base for the yellow pigments to show up on. Then she uses colors from four different eyeshadow palettes to create shades of yellow, contouring her mum’s cheekbones and nose with an orange color. North then uses a gold shadow for an overall glittery effect, as only she would.

After finishing the yellow base, North completes the look with bright white eyes and draws on Minion goggles using a liquid eyeliner pen. She uses a bright blue eyeshadow for Kim’s lips and finishes with a sparkly gloss. The video is composed of short one-second clips, making it impossible to get a clear view of what exact palettes and products the nine-year-old is using. However, since her auntie Kylie and mom Kim have their own beauty brands, we can assume she has unlimited access to those products.

Kim and North aren’t the only celebrities to jump on the Minion makeup trend. JoJo Siwa also recently posted her bejeweled take Minions look on her TikTok and Instagram last week. “This is my favorite makeup I’ve ever done #minions 💛,” she wrote as the caption, showing off a full face of yellow, black, and white rhinestones. Jojo’s sparkly (and time consuming) take on the trend has Paris Hilton’s approval, who commented with heart eyes emoji.

For non-celebrities, the viral Minion makeup trend has largely consisted prank videos, where people tell their friend of family member that they’re doing traditonal makeup on them, and instead painting their face to look like a Minion while their eyes are closed. One viral video showed a child crying after her true makeup was revealed. While it’s clear both Jojo and Kim knew what makeover was being done to them at the time, we doubt this is the last time we’ll see unexpected Minion makeup on our For you page.