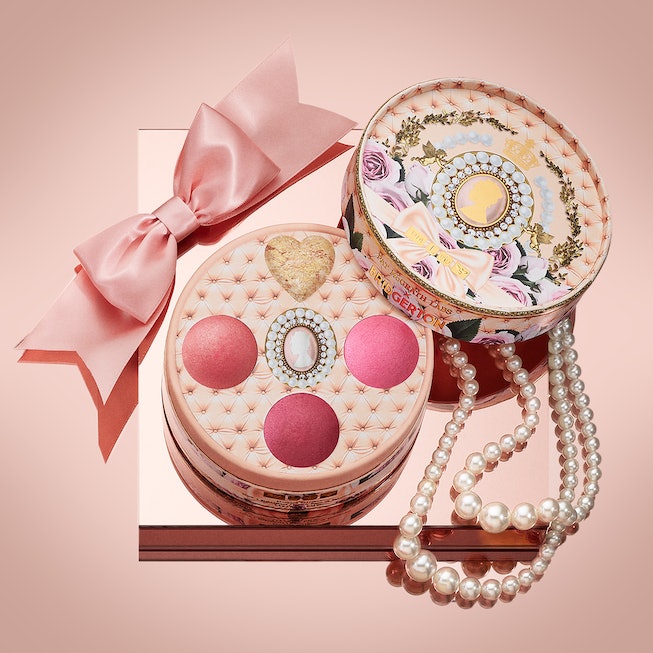 Back in December, Pat McGrath launched an exclusive Bridgerton collection building up anticipation for the arrival of the new season. Now, with the second season of Bridgerton on the near horizon (premiering March 25, to be exact), the brand has announced another collaboration, modeled by the show’s own Penelope Featherington, Nicola Coughlan this time around. Pat McGrath Labs x Bridgerton II features a host of limited edition beauty jewels including a new iconic MTHRSHP Eye Palette, a beautiful Blushing Delights Palette, Skintillating Body Shimmer, enticing SatinAllure Lipstick, and smudgy Velvet Kohl Eyeliner in packaging fit for royals.

“Pat McGrath has pushed the luxe modernity of Bridgerton beyond the screen with this collaboration and we are excited to share it with the world,” Sandie Bailey, Shondaland’s Chief Design & Digital Media Officer said in a press release. On Nicola Coughlan being the new face, Bailey said she is “an icon and a global force in the beauty and fashion industry and shares a creative passion for projects that evoke emotion”. From the look of the campaign she looks every bit the part, onscreen and off.

Pat McGrath has already posted a preview of the luxe collection on Instagram, showing off the limited edition MTHRSHP palette dubbed, “Belle of the Ball.” The six-pan set features shades inspired by the romantic series, including a velvety matte plum, a peony pink, and a pale rose gold. But better than simply being inspired by the show, Pat McGrath Labs was recently confirmed as the sole make-up brand used on the entire cast for season two of the Netflix drama. All the better to wear to recreate the looks of the blushing beauties of the cast.

The new muse, Coughlan has also already shared the collection on Instagram, captioning the post: “Cannot believe this is actually real but I’m so excited to announce that I’m the new @patmcgrathreal Muse ✨What an absolute dream come true thank you Pat I’m truly on cloud nine.” Considering the buzz online already, and the fact that the last collection sold out immediately, true Bridgerton fans might want to consider signing up for early access on the Pat McGath website, before the release date on March 24—just in time for the show’s return.

Check out the stunning new collection below: