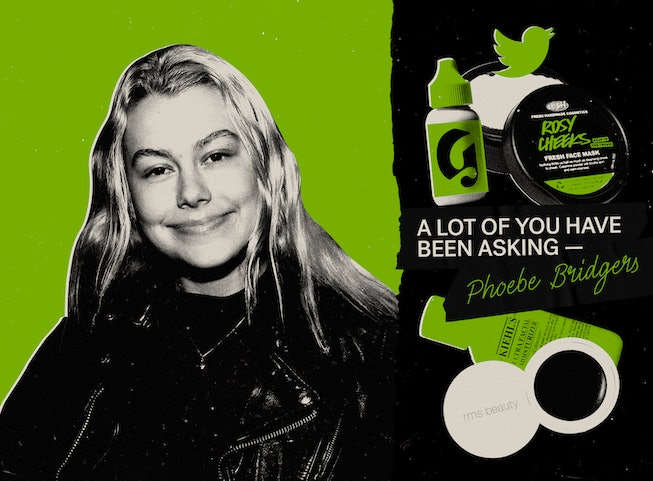 A Lot Of You Have Been Asking

Phoebe Bridgers is trying to figure things out. After releasing her highly anticipated sophomore album, Punisher, in mid-June, the momentum that was carrying her through the first few months of quarantine has fizzled out, leaving her to deal with the stinging realities that have come with this collective halting of time, and what it means to truly look at yourself.

What she knows for sure is that she misses her job and her band — also her best friends — and is fitting them into her day-to-day life in any way she possibly can for the time being. So, unlike her virtual World Tour that she did solo from various rooms in her apartment via Instagram Live earlier this spring, her performance for Red Rocks Unpaused on September 1 will finally bring the band back together.

Bridgers performance is set to kick off the virtual festival, hosted by all-digital wireless carrier Visible, followed by a glitzy three-day lineup including Megan Thee Stallion and Sam Hunt. It's as big and legitimate as any festival or set can really be right now, but still, Bridgers is far from adjusted.

“I think for the most part, it just makes it hard to be prepared,” she tells NYLON over the phone. “It makes it hard to really realize that people are watching you. You can totally feel isolated. But I guess this is a little easier, because it'll be a full band, whereas when I was just playing on Instagram live in my house, I would just sing with my eyes closed a lot. Like, am I even playing? But definitely, [virtual shows] beats nothing for sure.”

Despite the isolating feeling, she says that performing through a screen has offered one positive: caring less about how she looks ahead of the show; she’s just glad to be putting one on. “I don't know, maybe I'm just stressed about other things; I definitely have a lot of mask acne and ate chips for breakfast, but I don't think I'm as stressed about how I look as when I'm on tour getting looked at every day.”

For her Red Rocks Unpaused performance, though, she’ll be getting ready as if it were the real deal — with the inclusion of even some mascara, something she hasn’t worn almost all year. Filming live from a club in Los Angeles, she’s making it count.

Ahead of the performance, Bridgers spoke with NYLON about her no-fuss beauty staples, prioritizing therapy in quarantine, and the art of knowing when to keep your mouth shut.

Do you have a set beauty routine for shows that you follow, whether it's a virtual one or not?

Yeah, for sure. I mean, I don't typically wear makeup, so when I play or when I do stuff where I'm going to get my photo taken, I do. I wear Glossier, basically all the makeup that is the whitest possible makeup because of my skin type, otherwise I look orange. I use Glossier Stretch Concealer ($18) and [Skin Tint] foundation ($26), and then drugstore mascara, and typically a lot of sparkles on my eyes or on my face. Tons of sparkles. I haven't worn mascara all year basically, but yeah, I think I probably will for this show since it's filmed.

You also pull off a really good dark, mauve lip. Do you have a favorite?

RMS [Lip2Cheek in a shade] called Diabolique ($36). I love that shit. And then their Living Luminizer ($36) is the other thing that I've been liking, I also put that on my eyes. I kind of like the heroin-y Gerard Way 2005 look a lot. So I'll use that or I'll use Glossier Cloud Paint ($18) on my eyes.

Exactly. Yeah. I have no brushes.

Do you have a skincare routine?

Skincare, yes! I really like Lush, it's this face sh*t called the Ultrabland Cleanser ($19), which is basically like wax. It's super weird. You have to use it with a rag, but I don't know. It's just moisturizing and I feel like it always clears my skin up. I just love to be moisturized. And then I use Kiehl's Facial Moisturizer ($32) afterwards. I don't do face masks really. There's a face mask at Lush called Rosy Cheeks ($13).That's like the only face mask I've used that actually works. So sometimes if I'm watching TV or something or just want to go the extra mile, I'll use that because it stops your skin from being really red. And it feels nice. And I like the ritual of it.

Have you found yourself creating more rituals since we've been in quarantine?

Kind of the opposite. I kind of romanticize the workaholic thing, just constantly rolling and getting shit done, and I would squeeze time in for my routines. But when time is kind of up in the air and aimless and you have so many choices, it's hard for me to picture it. That's been the hardest thing, which I think action just kind of pushes motivation for me where like, if I do it, I know I'll feel better. But since being in quarantine, I've been struggling to keep routines going even though, and this is me giving myself a backwards pep talk, I need my routines and my rituals and to wake up at the same time every day, it's the only thing that makes me feel like a human being.

Are you trying to break out of that “workaholic" mindset?

Maybe, but I don't know. It really is such a medicine for me. And I also think because my hobby is the same as my job. Like, it is just what I get enjoyment out of. Maybe I need to be less wrapped up in it. I literally just put out a record and I'm like, “okay, what the f*ck am I going to do next? I have no job.” So it might be toxic. But that being said, my job literally is being around my friends, traveling around the world.

It's less about being overworked and more about like, "Oh sh*t. I actually should probably flesh out my personal life in a way where like, like if I didn't hit anybody up, I could go unnoticed." Nobody would ask where I was for months. And that basically happened in quarantine because again, I surround myself with all my best friends in my job. And then when we get home, we're like, peace. We have our own separate lives and it's not as integrated. So yeah, work is the only way I see my closest friends and I think I need to fix that, but I can't wait to be on tour again.

Punisher came out in mid-June, so you had something to put all of your focus and energy into at the beginning of quarantine. Where is that energy going now?

It was all this momentum that kind of petered out and did nothing because the minute I turned off my phone, I stopped existing in quarantine. I've been looking for other things to keep me active, but then I'd beat myself up for not being able to get it. Like, I was trying to learn piano and I kind of failed at that. I'm just hoping that I do some meaningful stuff.

I also got a new therapist and have been taking that pretty seriously. I think it's pushed a lot of people into that. Realizing that there's this thing that I haven't taken care of for years has been a big lesson, so you could say mental health. I’m trying to get a handle on stuff so the next time I do go on tour, I feel healthy.

Are there any other things you weren’t able to get around to before that you’re making time for now?

I guess the stuff that's private to me, like finishing a couple of books that were really good, or figuring stuff out and calling people that I haven't talked to in years. Just the small stuff I guess. I read "The Chronology of Water," which was so traumatizing. It's literally about this woman, Lidia Yuknavitch's memoir and it's so f*cking traumatic. It's really, really good. And then I read "Lincoln in the Bardo," the George Saunders book that I've been meaning to read. And then I read the whole MaddAddam trilogy by Margaret Atwood that was so disturbing. It's literally about a pandemic and the world being destroyed.

You need to read something light next.

[Laughs] Yeah, totally. Especially in the depths of tour, I probably was reading like two books a year because, you know, you get on the plane and then you're talking to your friend. I have tons of friends who totally devour books on tour, but for some reason I just wasn't doing that. And so I feel like I'm catching up to my life a little bit being home.

In the last year, and especially in the last few months, a lot more eyes have been on you than ever before. How have you adjusted to that reality, and do you feel like you’ve felt the need to censor yourself at all?

I mean, I think the internet has always been sort of semantical and I've been able to find people. There are shitty people and great people all over it and it honestly hasn't changed that much. I'm excited to actually talk to real life people again instead of internet comments.

Obviously, Black Lives Matter and stuff has made a lot of people kind of question their own privilege. So, if I have caught myself at all, it was because I'm a person, not because I'm afraid to get called out or afraid that people will be mad at me. But I mean, if you've read my Twitter, I think everybody knows I'm not actually that censored. I get it off on sh*tty people hating me, it's my favorite thing. So yeah, but I try to act on the internet the way that I act in real life, which is intolerant of the worst people, sensitive to my own place in the world, and knowing when to keep my f*cking mouth shut about stuff, you know?