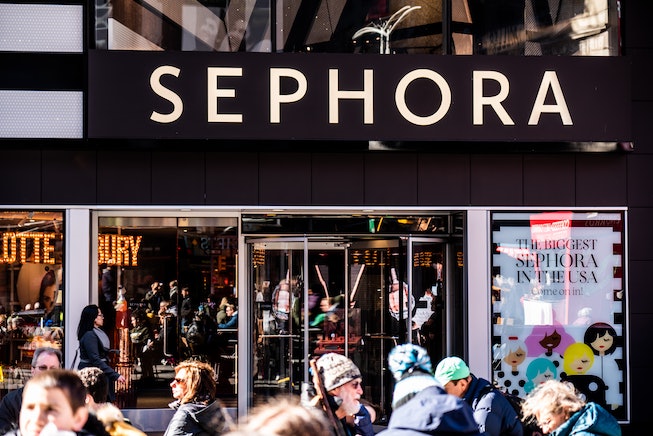 Change is officially coming to your next Sephora run. As the beauty space joins the rest of the world in calling for an end to continued racism and racial disparity, Sephora announced its support of the 15 Percent Pledge, an initiative aimed at encouraging large retailers to dedicate more store space to Black-owned brands.

Aurora James, a creative director in Brooklyn, spearheaded the online movement, The New York Times reports. Sharing an Instagram post on May 29, James called on retailers including Sephora, Whole Foods, Target, Wal-Mart, and Barnes and Noble to join the pledge. "So many of your businesses are built on Black spending power. So many of your stores are set up in Black communities. So many of your sponsored posts are seen on Black feeds. This is the least you can do for us," she wrote.

Speaking with The New York Times for a June 10 story, Artemis Patrick, chief merchandising officer of Sephora, confirmed it had committed to the pledge. “Ultimately, this commitment is about more than the prestige products on our shelves, it starts with a long-term plan diversifying our supply chain and building a system that creates a better platform for Black-owned brands to grow, while ensuring Black voices help shape our industry. We recognize we can do better," Patrick said. Currently, Sephora works with 290 brands, and of those, nine are Black-owned, The New York Times reports.

Sharing news of Sephora's support on Instagram, James confirmed the company was the first to commit to her movement. "We commend their early leadership and look forward to working with them on their accountability and commitment as we join together in the mission to put billions back into the Black community," James wrote.

Sephora also announced it had joined the pledge, and shared next steps on Instagram. Along with taking stock of how much shelf space is currently given to Black-owned companies, Sephora intends to explore how it can possibly use its resources to help in the growth of even more Black-owned beauty businesses.

Below, read the original statement regarding the 15 Percent Pledge and the news of Sephora joining.

NEXT UP
Beauty
30 Latinx-Owned Beauty Brands You Will Love
Beauty
September 2022’s Best Beauty Launches Will Keep You Cozy And Cute Throughout The Fall
Beauty
Olivia Cooke’s Beauty Evolution, From Indie Ingenue to ‘House Of The Dragon’ Queen
Beauty
Halloween Cat Makeup Ideas, From Easy to Inspired