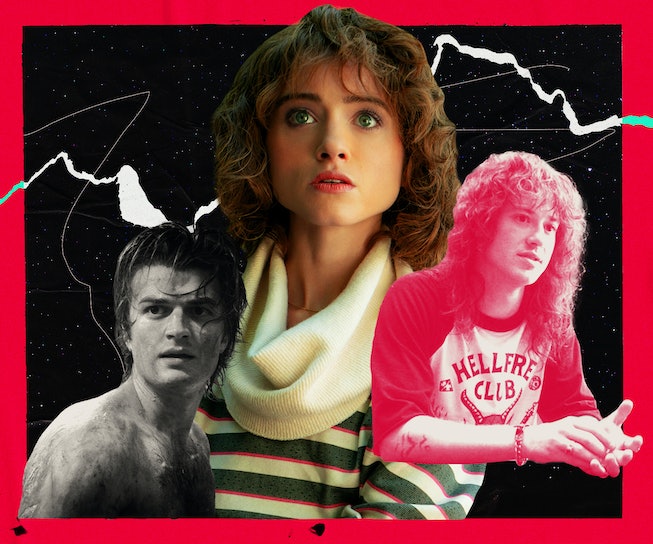 If you, like me, have felt an emptiness in your heart ever since you finished the final episodes of Stranger Things Season 4 earlier this summer, you know how hard it’s been to find something to replace it on your show roster. Even in the expansive landscape of shows across television and streaming, it’s hard to find something that has everything that Stranger Things has — from sci-fi horror and ’80s nostalgia to prison thriller action sequences and teen hijinks. It covers a lot of ground — and has a great soundtrack on top of everything else. But what you might not have thought about is what it takes to make every character in every scene look like they belong across all of these different genres, somehow swirled together effortlessly.

Saddled with that herculean task is the makeup team behind Stranger Things Season 4, lead by department heads Amy L. Forsythe and Devin Morales. Their work on the past season earned them a nomination for Outstanding Period and/or Character Makeup (Non-Prosthetic) at the 2022 Emmy Awards that will be held next month. It’s easy to see why they have earned a place in the upper echelons of television makeup artistry based on the sheer breadth of effects they have to make real onscreen, from ’80s makeup to battle wounds and everything in between. To celebrate their nomination, Forsythe and Morales caught up with NYLON to talk about creating realistic characters, the biggest challenges on set, and, of course, interdimensional space goo.

How did you kick off the process of designing makeup for this season? Do you get to read all of the scripts beforehand?

Amy L. Forsythe: No, no, no. [laughs] Generally, we film in episode blocks. Usually, it’s the first two episodes and then the second two episodes. This season we actually started with three and four, so we started in Lithuania and then we went to Atlanta to film. At one point we only had scripts for one through five—when the bats start attacking Steve—and then I didn't have anything else. And I was like, “Oh my gosh! Did they just kill Steve?” Why would you just leave me hanging like that?

Even on the inside you have to experience the same anxiety that viewers do.

AF: One hundred percent, and even more so. We're so close to these characters because we create them and we're close to the actors. So we know that we're going to watch them go through all of these emotions. It's very hectic when you're reading it.

When you begin, and in creating new characters for Season 4, where do you start?

AF: In the earlier seasons, you start to pull [’80s] references— magazines, posters, yearbooks, even. I'm 42, so I’m also asking friends for family photos, It's fun because everyone's photos are in the trailer and we’re laughing like, “wow, we really used to look like that”. But it's easier that way to get pictures from middle America, which is the Hawkins, Midwestern vibe.

For, let's say Eddie, who was new this season—he was scripted as a heavy metal, Dungeons & Dragons dungeon master and was scripted as being tattooed. So, I reached out to Jeremy Sutton, my tattoo designer, and started that process. I would say I want a puppet hand with some sort of ghoul and then he'd send me a picture and I would say I want it to be a little different—guiding him in that way, back and forth. I suggested a cluster of bats—I'm just calling things out and he is jotting everything down and [Sutton] makes me a flash sheet. Now, that's for Eddie. Well, then come to the costume design and Eddie’s wearing a coat the whole time [laughs]. But, I knew that Joe Quinn really, really loved having them on, even if you couldn't see them.

We were still able to spot some of them in the show.

AF: Well, that’s because we made it happen. I know things happen and it can go away. But I said, “if we do see the tattoos, when would we see them?” And they decided it would be in the woods with Chrissy and at the D&D game, because he would have his guard down. Taking his jacket off to make her feel more comfortable or when he’s around his friends.

Do either of you have a favorite character to work on?

AF: They're all our little babies. But it's all about the writing and what the actors are given. Steve has become precious because he’s become such a caretakers of the kids. It's those dynamics which make you like gravitate towards certain characters. Nancy is such a hardcore person— but she looks so demure. It's these little nuances between what you think a character will be and what they actually are—which I think is brilliant in this show. It shows that like strong people can be soft and soft people can be strong.

I will say design-wise, Yuri this season was one of my favorites. The actor [Nikola Djuricko], everyone was fighting to get him in their chair. He's very fun and had new energy. We put gold teeth and coffee stained teeth on him and weathered him and bruised him. He was game for it all.

Devin Morales: Everybody was great to work with and it was super fun. Introducing a lot of the new characters were super fun to bring to life. You know, Fred and his scar or Jason and the jocks, and all of the different stereotypes that we played on this season. We did that in a very real way and it was just really fun to bring a lot of new energy to the screen.

AF: I think the beautiful thing about this show is that the farther in you get, the more eighties gets layered in. Now we're in ’86. There’s even more characters, so this year we got to do more stereotypes. We got to do Susie's house with all these crazy kids with war paint all over them. It's just like that run-amok, latchkey kid, which was what was going on then.

Who took the most time for you to do this season?

AF: I think Joe Keery had the most chair time because we had to keep the continuity of the scratches and the dirt, cuts, and bruises, but also making him look kind of like an action hero. So, it's a fine balance and you have to remember where the little specs go.

DM: I agree. But, there's also so many things that we had to learn how to do quickly. So many times we had multiple people working on one character to make it go faster. Especially when minors are on set, their hours are limited. We had an awesome team and it was always all hands on deck every day to get things done as quickly as possible.

AF: There was like eight of us. Having enough people around that are just on top of their game is so important. There are not many characters on our show that everyone didn't touch at one time or another. We really had to be very fluid and not precious with our actors, whoever designed the look passes off that look and make sure that person knows that.

How do you keep track of the continuity?

AF: We get monitors where you can take screen shots as you're filming. It's all about pictures and documentation. If you don't have time to write down what you put on the character, take a picture of the layout of what you used. Because once somebody cleans it up, you'll never know again! Making the goos and the slimes—clearly none of us can do math—because every batch came out completely differently.

How do you go about making those things?

AF: Really, the only thing that we had to make from scratch were the goos and the slime, and the bat blood, and stuff. It's all the same base and you're just tinting them with makeup or food coloring depending upon what you're using it for. You have to math out how many drops of whatever you're putting into it and then you write it down and we have a little recipe box.

DM: A bunch of funny labels on bottles, for sure. It would be like, “Interdimensional slime goo #1” or “Demogorgon saliva”, because we have so many things that are specific to our show and the color palette and the products are not pre-made.

The show is so popular, I'm sure you've gotten so much feedback. Is there anything that stuck out to you?

AF: I love all of the theories. Everyone has a theory about something. When somebody know I worked on the show, they’ll be like, “oh my gosh, my theory is this...”

DM: A lot of fans are getting [Eddie’s] tattoos. Right, Amy?

AF: The second that the season dropped, people were trying to get the tattoos and were trying to take still photos of them. I'm a heavily tattooed person and I hate the thought of people out there with bad artwork and needing to get coverups later. So I thought, I'm going to release these designs one at a time and it was a little feeding frenzy. Everyone was just so excited and then they would go on about what they thought the meaning was.

DM: Just like everybody, I see the funny memes and the comments and they're just all really like sweet and entertaining. I do love all the comments on the Eddie’s pictures of the wounds with people commenting, “They don't look too bad. I think he could have lived!”

What was the freakiest effect you did this season or the most difficult one?

I think the most tedious one was [in the horror sequence] when Chrissy’s dad is tied into a chair [in episode one]. It became this whole thing, because this actor needs to be tied to a chair with no sight and no way to speak to us. So it needed to be as little amount of time as possible, because if he has a panic attack, we won't know. We had to test it on him and make sure that he was comfortable. We let him choose— either you’ll have sight or speech up until the last minute. He chose to cover his mouth because he could use his eye to see and to write things down on a board. And then about 20 minutes before they needed him the other eye effect went on and was painted. We brought him in then sat him in the chair. And five of us feverishly—we had maps of which way the strings had to be tied from our test—we just got him sewn in that chair and they shot it. They called lunch and we got him out as fast as possible.

Is there anything you’ve wanted to do on the show that you haven’t had a chance to yet?

AF: The sheer content the show had given us to create this season was just astronomical. You know? From the roller rink, to the gulag, to a lab, to the 1950s Creel house. What a dream? It's not like working on a sitcom, which I've done and I love it's a really nice pace, but it's so different. As a creative and as the department heads of other creatives, we really want people to come in and have fun. A person walks in in the morning one way and this is how they transform at work and then we wipe 'em back to themselves at the end of the day. It's just really rewarding.