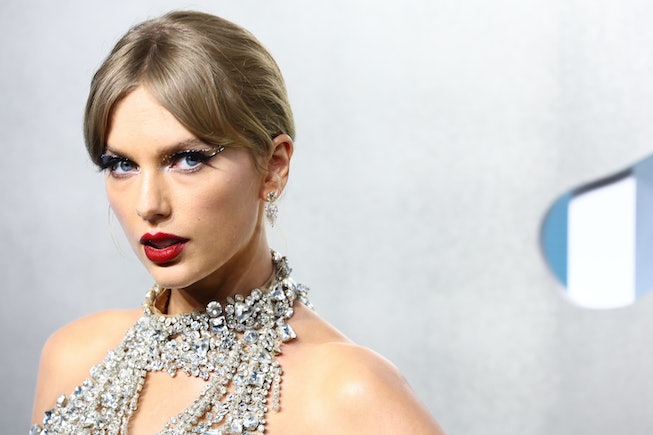 Taylor Swift is best known for her eras. There was her Reputation villain era, before we even knew what a villain era was. There was the Folklore and Evermore era which gave us a softer Taylor with Cottagecore braids and barely-there makeup. She likes a theme and is committed to sticking with it as long as the era lasts. Perhaps her most beloved and well-remembered era of all was her iconic Red era when she was never seen without a red lip and a black cat-eye at all times for years. Now, for the 2022 MTV Video Music Awards, Swift has brought back one of her most signature looks— only this time with a creative twist.

The singer arrived to the red carpet for the MTV VMAs wearing an Oscar de La Renta dress dripping with crystals. To go with the glittering fashion moment she wore a classic blue-red lip and black liquid cat eyeliner, but she modified the look with sparkling crystal face gems outlining her eyes. To keep the focus on her impeccable makeup look, Swift’s hair was pulled back into an understated bun, with her bangs center-parted and pushed out of her face.

The makeup artist behind Swift’s beauty look for the awards show was none other than the master makeup artist herself, Pat McGrath. After Swift made her red carpet debut at the August 28 event, the artist took to Instagram to share the details behind the full glam.

McGrath captioned the post, “TAYLOR-MADE BEAUTY💎💎💎 “Surprise! I have been SO EXCITED about this! The MOST DIVINE @taylorswift in #makeupbypatmcgrath at the 2022 @mtv#VMAs in total #patmcgrathlabs” before going on to list the key products and steps she used to paint Swift’s face. The star products she calls out include her newest launch, the Mothership X: Moonlit Seduction Palette, the first skin care launch from the brand, the Divine Skin: Rose 001 The Essence, Skin Fetish Highlighter + Balm Duo in Nude, and the LiquiLUST: Legendary Wear Matte Lipstick in Elson 4 for Swift’s iconic red lip.

She generously shared her step-by-step guide to getting Taylor’s look for all Swifties who might want to get the look for themselves at home. See McGrath’s full Instagram post below:

NEXT UP
Beauty
The Best Beauty Looks From The 2023 Grammy Awards
Beauty
Doja Cat Wore Over 30,000 Crystals To Schiaparelli’s Couture Show
Beauty
This Hailey Bieber-Approved Blush Now Comes In 4 New Shades
Culture
The Cutest Couples At The 2023 Grammys
Style + Culture, delivered straight to your inbox.