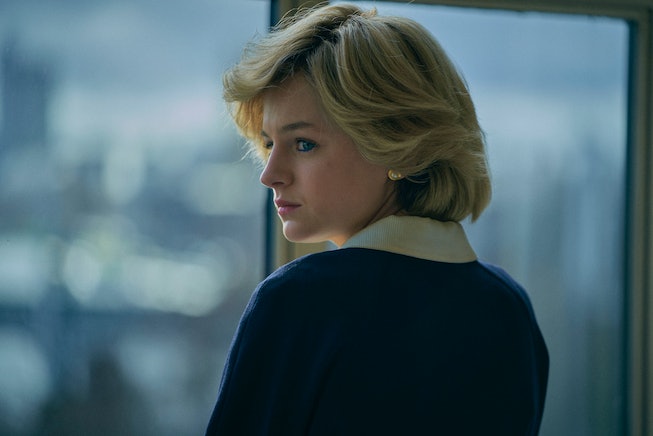 The return of Netflix's The Crown includes the debut of a new member of the royal family. Now in its fourth season, the series, which follows the life of Queen Elizabeth II, picks up at the end of the 1970s. With this new backdrop comes the arrival of a young Lady Diana Spencer (Emma Corrin), and Crown hair and makeup worked to carefully and accurately replicate Spencer's beauty routine.

According to Cate Hall, hair and makeup designer for The Crown, creating Corrin's look started with intense research. "I spent a few months just doing picture research, collating vast ‘bibles’ of images in chronological order. I make one for each principal royal and the prime minister as they help me to focus on the most significant aspects of their appearance and track how they change over the period of our story," she said in an interview with Netflix.

For series four, Hall was tasked with creating a look that chronicled as Spencer aged from a teenager to an adult. "We had to figure out how to play this over ten episodes," she said.

Hair and makeup kept much of their focus on Spencer's hair, as Hall noted that "Diana’s haircut was what defined her look, even un-styled it is unmistakably her." The team relied on wigs throughout series four, keeping a "Diana cut" for the character that changed in color and styling as the series progressed. "The Princess Diana wigs were very low maintenance," Hall said.

The character's transition from natural to glamorous was also reflected in the chosen makeup. "We kept Emma’s makeup as natural as possible for Diana’s younger years, using no foundation at all for episodes one through five," Hall said.

It wasn't until the series reached the 1980s that the glam was adjusted, and more dramatic makeup started to play a central role. Hall explained that the team used "beauty makeup trends of the 1980s to age Emma, and to emphasize her emotional narrative."

Of the trends the series looked to for inspiration, Hall pointed to the decade's melting pot of fashion and trends. "For the first time with makeup, women were emphasizing every feature of their face simultaneously and a full face of make-up was common practice. Hair was less manicured and easily maintained; women relied on perms and specific haircuts to define their style, rather than extensive styling processes like roller setting. Whilst we wanted the look of the show to evolve in line with the era, it was important that above all the hair and make-up read as real and authentic, so not everyone looks like they’re straight out of a fashion magazine, but the younger generation look very different to their parents."

Adhering to that authentic required looking to Hall's actual makeup routine for guidance, and Hall shared one look that was especially important to include. "We knew from research for example that Diana would apply her iconic blue eyeliner and mascara when she felt vulnerable and targeted," she said.

Hall stressed that when it came to the show's use of hair and makeup, she never wanted to detract from the story. "Recreating iconic and well-known characters in an authentic and believable way is our main focus on The Crown. Whilst it is tempting to use all the tricks at our disposal, we realize early on that there comes a point where hair and make-up can render a performance false or phoney. Typically, we aim to achieve a perfect silhouette of the character by mimicking their instantly recognizable hairstyles perfectly, then allow the performance to do the rest."