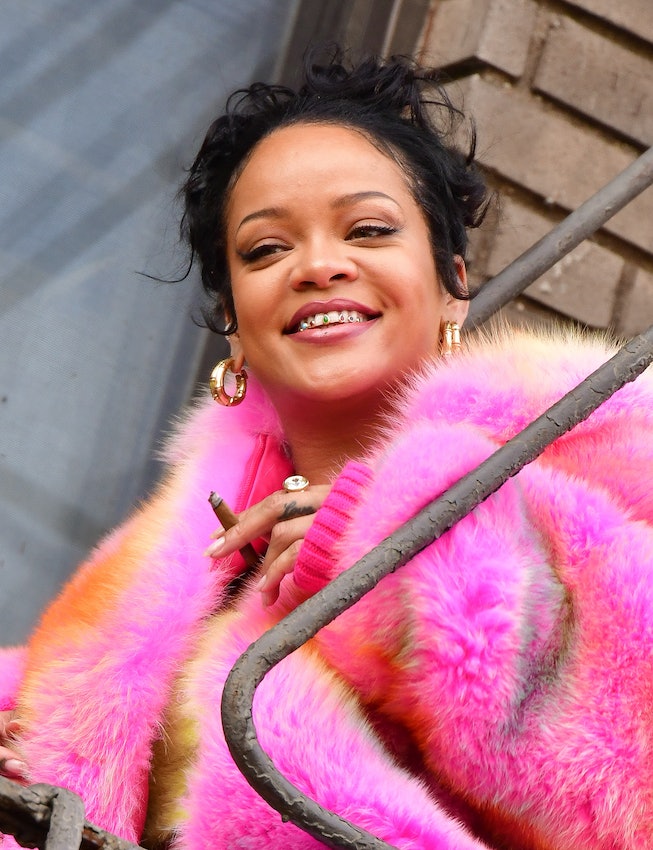 Scrolling down the TikTok For You Page over the past year, you’ve likely seen that tooth piercings (also called tooth gems) and tooth jewelry, in general, are having a major surge in popularity. From grills and full-tooth gem covers to small, single-tooth charms, tooth embellishments are just one of many 2000s-era trends that are making a comeback right now. In fact, the #toothgem hashtag has amassed over 163 million views on the app, and recent research from PolicyBee analyzing nostalgic beauty trends found tooth gems to be a frontrunner in Y2K comebacks.

While tooth jewelry was a major part of late ‘90s and ‘00s style and is having a resurgence thanks to TikTok, tooth gems are not a recently invented trend by any means. Similar jewelry has long been part of Latinx culture, dating back to the earliest documented examples in the Mayan Empire (they did, in fact, drill into teeth and fill the holes with precious stones).

Tooth jewelry also holds cultural significance in Black style history, especially grills and caps — which have also become more popular in the past year, due in part to a new crop of grills artists including Helen Harris aka Helen with the Gold Teeth and Dolly Cohen. Modern grills can be traced back to West Indian immigrants and Black New Yorkers in the ‘70s and ’80s, with Eddie Plein credited as the inventor of the gold removable fronts. As gold teeth continued to rise into the spotlight after Nelly’s “Grillz” music video (which featured over 70 close-up grill shots), so too did other forms of tooth jewelry.

Contemporary Detroit-based grills artist Ruqayyah Alzona Al-baari learned the art in South Florida, where she found tooth jewelry a mainstream stay in predominantly Black communities prior to the trends of the moment. She thinks that while educating people on the cultural context of tooth jewelry is worthwhile, so too is keeping in mind who is profiting off of it now.

“I love seeing so many new sorts of jewelry designers, especially women [and] Black women more specifically, that are coming into this practice, because it is very much a part of our culture, as far as who wears it,” Al-baari tells NYLON. “As long as you're supporting people within your community, I think that's awesome. And, hey, if you find someone outside of your community who's doing it, I think there's more than enough business to go around.”

With the beauty and style industry’s track record of cultural appropriation, it’s important to recognize the roots of tooth jewelry. Celebrities such as Hailey Bieber and Kourtney Kardashian get called trendy for wearing them, while tooth jewelry has long been and may still be stigmatized when worn by Black and Latinx people. “Sorry but this whole ‘tooth gems’ trend is literally just white people stealing yet another thing from Black culture that they continue to discriminate against when it’s on Black people,” wrote one Twitter user on the trend.

As far as Al-baari sees it, the anti-authoritarian nature of the style trend is what makes it cool, with tooth gems definitely being the more accessible version of tooth jewelry. “I think everyone can wear a grill or a cap or tooth gems,” she says. “I think it's for everyone. It's just kind of expanding the scope of non-traditional fashion, right? And allowing people to demand self-expression in spaces where maybe you're more so supposed to be conforming. It's the nonconformity thing that I love about it overall, and I think that's what attracted me to it.”

There’s no denying that many people right now are frantically figuring out ways to bejewel their teeth, even including using DIY at-home kits. For the practical side of things related to tooth jewelry, we’re here to demystify what tooth piercings are, how long they last, and whether they pose any health risks, as explained by a dentist.

What Is A Tooth Piercing?

“Tooth piercing” is a bit of a misnomer, since you don’t actually drill holes into your teeth, as the name suggests. In fact, you attach jewelry to the tooth’s surface. This can include diamonds, sapphires, rubies, crystals, gold butterflies, or even model Adwoa Aboah’s Chanel logo design.

How Long Do Tooth Gems Last?

A temporary tooth piercing can last up to six weeks, while a semi-permanent one will stay on anywhere from six months to a year, or until you decide to have it removed professionally by a dentist. Both are reversible and (when done correctly) won’t cause harm to your enamel.

How Much Do Tooth Gems Cost?

You can typically expect tooth gems to cost anywhere between $30 to $100 USD — or more depending on the quality of the embellishments or metal materials used. Some places offer everything from Swarovski crystals and opals to solid gold charms.

Where To Get A Tooth Piercing

As with all things concerned with teeth (and thus teeth piercings), it’s best to ask your dentist. Dr. Tina Saw DDS, general and cosmetic dentist at Elevated Smiles, offers gem placements on teeth in her private dental practice in San Diego. “Finding a dentist who can bond it safely and conservatively is key to keeping the gem on long-term,” she tells NYLON. “Placing gems does not cause permanent damage, and if you ever decide you no longer want the gem, a dentist can easily pop it off without harm.”

While other beauty practitioners do offer the service, Dr. Saw warns people to be wary of anywhere that might not use a dental bonding agent that is biocompatible and safe for the mouth. “I would never recommend super gluing or adhering the gem yourself, as allergic reactions or permanent damage to the tooth can occur if utilizing the incorrect material,” she says. So, be wary of DIY kits you see on TikTok.

Dr. Saw says one of the most important considerations when getting a tooth gem is choosing a smooth stone so the inside of your lips and mouth don’t get irritated. Once the gem is adhered on, it’s important to brush and floss your teeth like normal. “Any tooth can get a cavity with poor dental care,” she says. “When a cavity occurs around or underneath the gem, it could cause the tooth structure to be soft and make the gem pop off.” Cleanliness is always first, no matter which way you want your smile to shine.

This article was originally published on Aug. 31, 2021