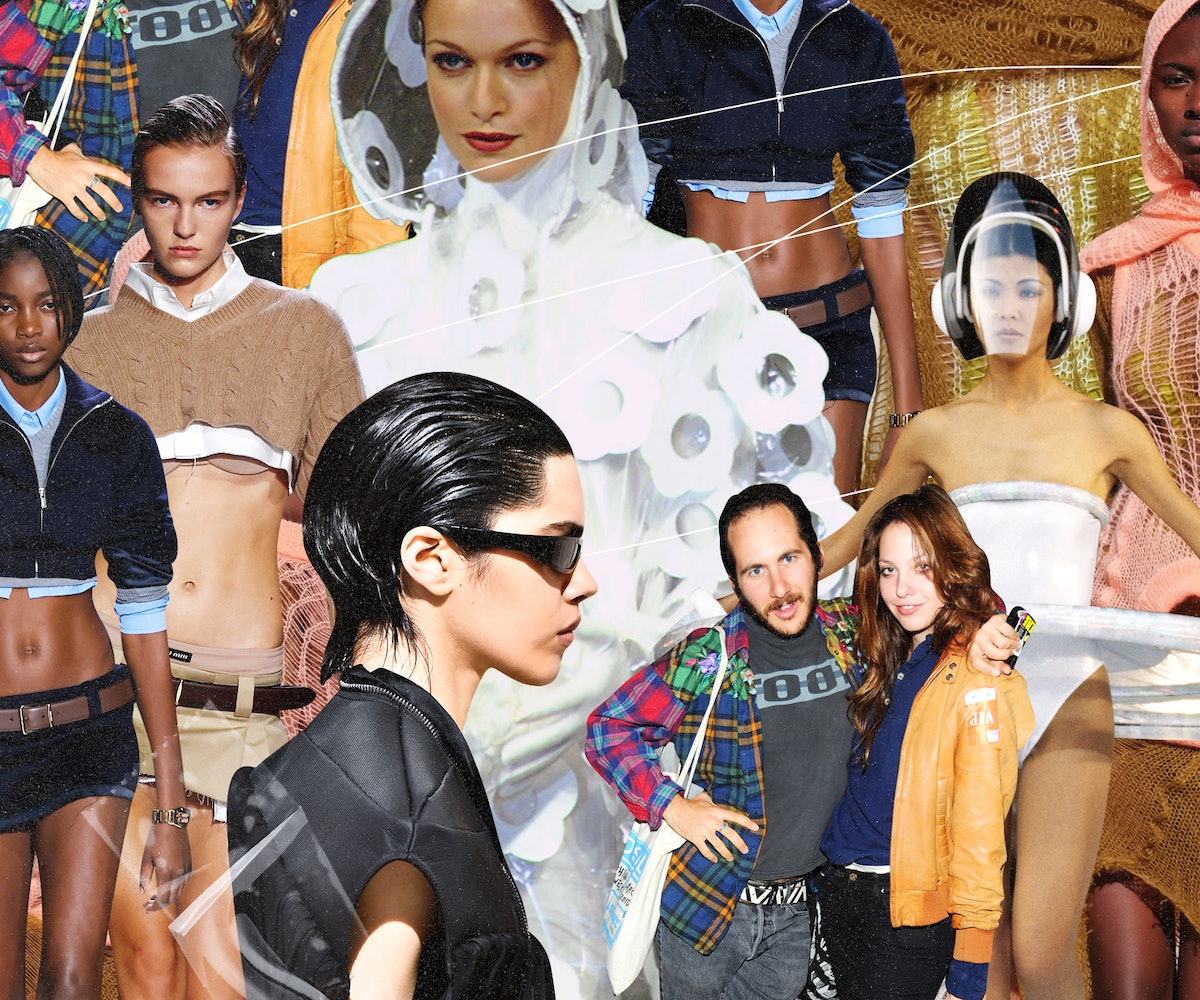 In Meryl Streep’s iconic cerulean sweater monologue from The Devil Wears Prada, the Wintourian Miranda Priestly decrees that fashion executives’ decisions create a mass trickle-down effect, ostensibly taking credit for the initiation of the trend cycle. While this isn’t exactly true nowadays, the trends that haven’t even come to fruition yet have already been decided. Fashion forecasters gather and analyze data for years in advance to gain insight into what will be trending down the road. WGSN, one trend forecasting powerhouse, is a leading fashion prophet, calling colors, concepts, and styles far ahead of their day in the sun. Since a WGSN subscription is not within budget for most outside of the fashion industry, TikTok trend forecasters are filling in the gaps and rapidly gaining legitimacy in the trend forecasting business.

With the social media platform’s contribution to the rapid acceleration of the trend cycle, aesthetics are coming and going at warp speed. Trends are deviating from the traditional 20-year cycle, creating room for more creative and diverse subcultures. Ahead of the new year, NYLON asked some of our favorite TikTok forecasters to take a look into the crystal ball and tell us what aesthetics they see trending in 2022.

Everybody break out your Arctic Monkeys records and American Apparel disco pants because Mandy Lee (@oldloserinbrooklyn) foresees a resurgence of alt Tumblr mania. Indie Sleaze reigned supreme from 2004 to 2015, and its revival will bring about the return of creepers, denim, and lamé. Lee sees the look as nostalgia for a sense of community after a long period of isolation. “I think there’s also going to be more of an emphasis, yes, on the fashion, but also very rooted in community,” she tells NYLON.

Biz Sherbet of @thedigifairy seconds the nostalgia component of Indie Sleaze. “The late aughts into the first few years of the 2010s were a time when you could be an online It girl, like Cory Kennedy or Tavi Gevinson, without being an influencer,” she says.

This upcoming trend is, according to Lee, a “combination of archival fashion, neutral maximalism, and the subversive basics trend” and leans heavily on layers and earthy hues. Inspired by the movie Dune and influenced by brands like Rick Owens and Maison Margiela, Avant Apocalypse may seem intimidating, but Lee assures that there is room for individuality and sustainability, thanks to the secondhand shopping boom.

Delaney Bryant (@ufodelaney) also thinks that the DIY nature of subversive basics — basics with surprising cutouts and layers, coined by Agus Panzoni — gives the trend staying power through 2022. “Many people lack sewing [and] garment construction skills, or even a desire to create their own piece,” she says. “However, when you have hundreds of 15-second, no-sew tutorials in your hands — why not convert your old tights into a trendy top?”

Agus Panzoni (@thealgorythm) agrees. She thinks that “sculptural styling,” a practice of positioning, wrapping any layering garments to give them new form, will also have a hand in the trend’s popularity. “Sculptural styling questions fashion silhouettes by DIYing new styles utilizing one’s body as a canvas. It comes as a response to the ubiquity of fast fashion’s designs, giving style enthusiasts an exclusive alternative,” she says.

Pierrah Hilaire (@pierrahh) underscores the impact of layering. “I know it’s a running joke with people, but when I see a layered look, especially if it’s a little bit distressed or has enough subversion to it, to me that looks good,” she says.

“Fashion is not fashion without looking both forward and backward,” says Bryant. The ’60s revival and the mounting space tourism industry will beget mod futurism in 2022. The trend shouldn’t come as a huge shock — the past few years have been saturated with space travel, from billionaires’ recreational romps through the cosmos to the growing interest in life beyond our planet. Citing trailblazing influence Barbarella and modern adaptations, like Ariana Grande’s R.E.M. beauty collection, Bryant says, “It’s impossible to scroll through TikTok without seeing a ’fit check consisting of mini skirts, go go boots, and that viral vintage Courrèges jacket.”

“Advances in space tourism have brought newfound hope for the future,” Panzoni says. She thinks that the forward-facing trend will breed unconventionality beyond aesthetics. “This time around, I expect to see innovation center around biodegradability and modularity. We’ve already started seeing it on the Spring 2022 runways, with Loewe, Mugler and Chet Lo championing the style.”

“Ballet is already having a moment in fashion, from Olivia Rodrigo cosplaying as a ballerina in her “Brutal” music video, to Lily-Rose Depp’s staple ballet flats, to a revived interest in the 2010 ballet thriller Black Swan,” says Sherbet. Muted colors, wrap sweaters, and ballet flats are to be expected. No need to break out your old leotards though — subversive basics can also add a twist to a centuries-old aesthetic, giving it a fresh approach for 2022.

Lee expects an expansion of the underwear-as-outerwear trend come 2022. “It’s inspired by Lolita fashion and Renaissance — very old school garments. And it’s interesting to see how they’ve been reinterpreted in a modern way,” she says. In a continuation of the Bridgerton-inspired corset trend, Lee thinks that garter belts, bloomers, and leg warmers will soon be making their way into the mainstream once again.

While Hilaire calls the look “cyber style,” she does not mean the logomania and blingy aesthetics of Y2K fashion, so don’t dust off your Von Dutch just yet. Hilaire instead predicts a return to ’90s vintage, Japanese aesthetics, and turn-of-the-millennium screenprinting techniques that she refers to as “hyper Gen Z.” She cites vintage Jean Paul Gaultier and Marc Jacobs’ Heaven collection as references. The isolation of the pandemic, as well as its sobering reality, also influences the trend. “A lot of people are playing more into their childhood,” she says. “People just want to be playful with clothing.”

Jane Macfarlane, art director at The Digital Fairy, calls the aesthetic that sits at the intersection of cheugy and cringey “Die, Cry, Hate,” or the antithesis of “Live, Laugh, Love.” “The flavorless naivete of cheugy style meeting the weird complexities of cursedcore is a match made in hell — but an attractive opportunity for a generation who want to mash up the mainstream,” she says. Proprietors of the “so-bad-it’s-good” look will likely be wearing demotivational slogan T-shirts, unflattering color combinations, cringeworthy knockoffs, and creepy charm jewelry.

NEXT UP
Fashion
Rosettes Are 2023’s Biggest Trend — Here’s How Celebs Wore Them in the 2000s
Fashion
R&B Artist María Isabel Is Making Room For New Style With Nuuly
Culture
On The List (With Melissa Rich): How To Throw The Ultimate Apartment Party
Fashion
Collina Strada & Vans Team Up For A Chiller-Friendly Collection
Style + Culture, delivered straight to your inbox.