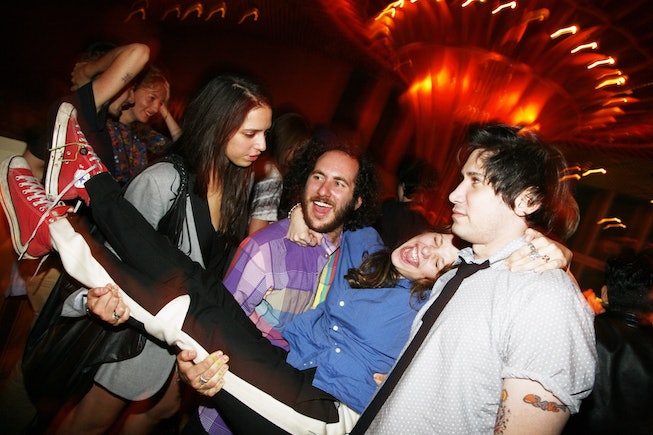 You might wanna dust off your skinny jeans, “I Heart Boobies” bracelets, and oh, by the way, side-swept bangs are about to be a thing again.

Amidst the 2014 Tumblr nostalgia revival, which was filled with quotes from The Fault In Our Stars, oversized band tees, fishnets, chokers, Arctic Monkey vinyls, and pleated tennis skirts, the internet is only just beginning to take us back to some (not-so) hidden gems of the late aughts to early 2010s.

Meet “Indie Sleaze,” the risqué aesthetic that might be making its way back onto our online feeds. With the ‘90s and Y2K fashion trends dominating both the internet and our wardrobes over the past few years, we’re diving even deeper into the “naughty aughts,” and that might include finally swapping out our sparkly butterfly tanks, platform boots, and low-rise jeans for skinny jeans, ballet flats, and a top from American Apparel. Bonus points if you find yourself a pair of shutter shades.

The “Indie Sleaze” era first made its appearance during the height of MySpace of the early-to-late aughts, and has also been associated with the very beginnings of Tumblr in the 2010s. Indie Sleaze also coincided with Bloghaus and tapped into a range of styles, like the scruffy hipster phase (or, in modern terms, the Brooklyn hipster who happens to live off the L train and only shops at thrift stores), the ‘70s and ‘80s electronica club scene, and even cues from the grunge aesthetic.

Much like its name, Indie Sleaze puts the whole “effortless, party-in-the-moment” vibe at the very forefront. Trend cycle analyst Mandy Lee, better known as @oldloserinbrooklyn on TikTok, points out some key characteristics from the height of the millennial-dominated subculture. According to Lee, carefree maximalism was at its peak, noting that pre-Instagram amateur flash photography, smudged and imprecise makeup, provocative ads from American Apparel, and vivacious party-hard clubbing will most likely make its comeback in a few years. You can also expect to dig up some of your beloved “now-vintage” technology (or purchase items that mimic them), like digital flash cameras, flip phones, and (can you believe it?) wired headphones.

In a follow-up video, Lee dissected the Indie Sleaze trend a bit further and highlighted the height of The Cobrasnake party blog, circa 2005 through 2008. Founded by Mark Hunter, these exclusive parties would often be filled with some of our favorite celebrities, like Paris Hilton, Avril Lavigne, Katy Perry, Mary-Kate Olsen, (pre-Moschino) Jeremy Scott, Kanye West, Lindsay Lohan, along with Cobrasnake regular and NYLON’s own OG “It” Girl Cory Kennedy.

Instagram account @indiesleaze, which “documents the decadence of mid-late aughts and the indie sleaze party scene that [ended] in 2012” through archival photos and music playlists, also mentions the nostalgic reign of The Cobrasnake’s photos. In one post, the anonymous user writes, “The Cobrasnake’s photos were Instagram before there was Instagram, capturing candids of celebs off-duty at the after party.”

Although there’s currently not too much going on under the hashtag #IndieSleaze on social media as of now, like Lee, we’re expecting its revival to hit mainstream very soon. As outfits during this time didn’t seem to have too much thought and were often just thrown together, our guess is that we’ll be seeing garments like loose-fitted tanks, plaid flannels, skinny jeans, and chunky necklaces making their way back into our closets. And we’re bound to see tasseled scarfs, colorful tights, and high-top Converse sneakers paired with messy buns and heavy side-swept bangs, too. Not to mention, metallic lamé leggings could be coming back once again in the near future (although, we really hope not).