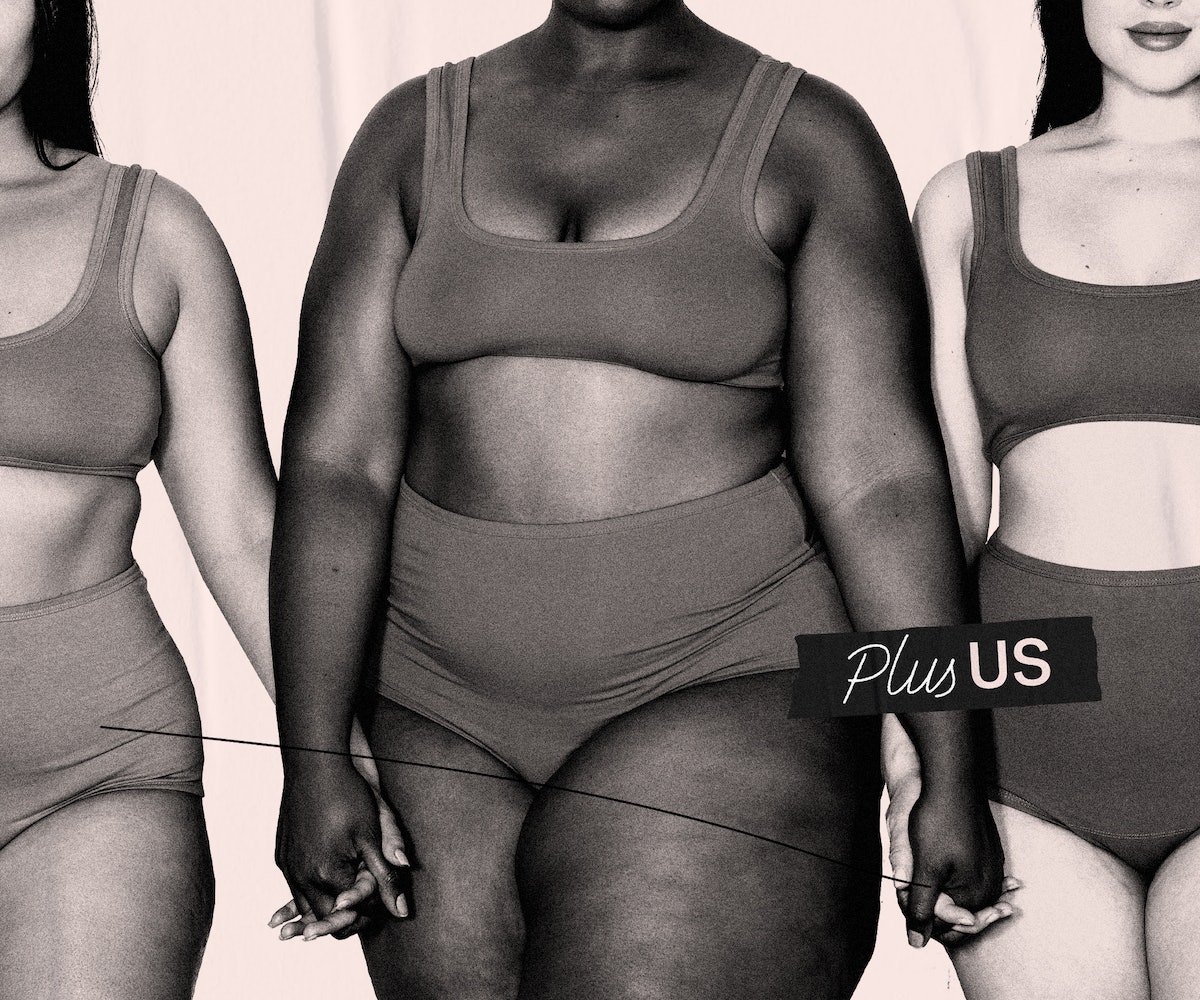 The conversation surrounding allyship has become heated in recent months, as has the topic of elevating marginalized voices. And while the Black community has spearheaded this pressing conversation, members of the fat community — many of them POC themselves — are speaking up on what allyship truly means, and how those in privileged bodies can aid in the battle towards dismantling fatphobia.

“Those in privileged bodies should be working, either on the ground or digitally, at amplifying and supporting fat activists, without the centering of self and your personal experience in your body,” says Evette Dionne, Editor-in-Chief of Bitch Media. “In order to build a kind of groundswell around fatphobia being an unacceptable condition in our society, you need allies.”

The commercialization of body positivity has left many fat people to feel excluded from the movement itself. What began — according to leading activists in the space — as a mainstream spiral of the fat acceptance movement of the 1960s is no more. In recent years, body positivity has taken on a “one size fits all” form, transforming into a clickbait-worthy message that all bodies are beautiful. And in doing so, the lines between self-love and body positivity have been blurred.

Because of this, well-meaning thin influencers — as well as everyday people — are unaware of what constitutes true support of the fat community. Is it sharing aesthetically-pleasing graphics on Instagram that remind us that our worth is not dependent on weight? Is it through protests and brand boycotting? What exactly does it mean to be a thin ally in 2020?

“I have learned so much by following those who don't look like me online, and hearing from their own personal experiences,” says Mik Zazon, creator of #NormalizeNormalBodies. “Because my story isn't unique; It's a global issue.”

Many within the fat community — including Alysse Dalessandro, blogger behind Ready to Stare — have applauded Zazon for her activist ways. As the co-founder of The Rose Retreat, Zazon and her team have hired a board of diverse influencers to bring perspective to their space, paying them for their input (which, given how often fat creators are asked to work for free, is something that stood out to Dalessandro).

“I truly believe at its core that body positivity was created to liberate and free all bodies from societal oppression and size discrimination,” Dalessandro tells NYLON. “You sharing a selfie, if you exist in a privileged body, is not liberating to someone who doesn't.”

Zazon frequently highlights fat creators on her platform of over 734K followers, first clarifying with her audience that this is a safe space for them to share their experiences. Hate is not tolerated, and Zazon makes sure to rid her platform of anyone who can present harm to the creators she features, so that “they're not expending more emotional labor than they need to.”

"I truly believe at its core that body positivity was created to liberate and free all bodies from societal oppression and size discrimination."

Not everyone is on board with the topic of thin allies, however. The fat community has been burned many times by those who claim to support but rather, take up space and erase voices — particular those of Black women — from the conversation. Seeing this happen across identities, Da’Shaun Harrison, an editor at Wear Your Voice Mag and soon-to-be author of Belly of the Beast, says they “don’t actually believe in allyship.”

“In my experience, these people are less committed to marginalized people's liberation and are more committed to performing a sense of camaraderie to the marginalized group, but for their own personal gain,” Harrison explains.

In a perfect world, Harrison would define a thin ally as someone who “is really understanding and interrogating how fatness interacts with anti-Blackness,” a topic that requires extensive research. Fatphobia itself is driven from racism, dating far back to the days of slavery when the Black body was ridiculed, yet over-sexualized in closed corners by powerful white men.

“The reason why we look at bodies the way that we do is because racism, anti-fatness, and ableism," Harrison adds. [We need to] eradicate those things because...the issues with your body are predicated on having issues with being Black, being disfigured, being fat or being disabled.”

For those up to the challenge, further than sharing your online platforms, being an effective activist requires a deep education and understanding of what the fat experience is. Because while the co-opted body positive movement may preach otherwise, what the fat community is fighting for is not simply the end of body shaming.

“There’s been less of a concentrated effort to pass more workplace discrimination laws that protect fat people from discrimination, or there is less focus in the body positivity movement on protecting disabled people,” Dionne adds.

Social media has both aided and harmed the movement at large, bringing it to the mainstream while also making it highly centered in one’s self. This had led many — especially thinner, white women — to create personal brands around body positivity, only amplifying fat voices once their platform reaches a certain status. Body positive hashtags are flooded with “thin white women sitting and making their body have a role that they wouldn't have otherwise if they were standing up,” as Dalessandro puts it.

The best way to be an ally is by first dismantling fatphobia within one’s self. Sure, you may feel comfortable sharing body positive creators online, but would you date a fat person? Would you call out a family member for blatant fatphobia? Are you capable of having the same difficult and stigma-shattering conversations at your dining room table that you would online?

To best understand the plus-size experience, thin supporters must understand one vital truth: Being fat is not a choice. As Dionne explains, society puts fatphobia at a lesser level than racism or homophobia as it’s taught to be a quality one can easily change.

“People still think being fat is a choice, that if you really focus hard enough, curtail the amount of calories you bring in, exercise more, and you follow this basic ‘science,’ that you could be thin. And so they’re not going to extend protections to us because ‘we’re just lazy,’” Dionne explains.

Even well-intentioned, no one can fight for another human without understanding what the fight is for.

Thin allies should ignore the pressure to immediately post online, a performative move that has become all-too-common in our social media-first society. Dionne suggests reading through books on the matter, including Killer Fat by Natalie Boero and Fearing the Black Body by Sabring Strings. Sonya Renee Taylor’s The Body Is Not an Apology: The Power of Radical Self-Love has become a popular go-to on the matter as well.

Even well-intentioned, no one can fight for another human without understanding what the fight is for.

From there, connect with fat activists online and personally through direct messages or emails. Immerse yourself within the community to understand the different perspectives that live within it. Don’t be afraid to ask difficult questions and make mistakes. “It’s okay to be wrong, it's okay to mess up,” Zazon says, “because it's not about me; it's about equality.”

And when posting to social media, forgo the unwritten rules about the “perfect eye-pleasing Instagram feed,” because if Instagram aesthetics are preventing you for sharing your platform in impactful ways, “you're not really in the fight,” Dalessandro adds. And remember: the algorithm is in your favor.

“[Those in thin bodies] are automatically going to get more attention because of the privilege that you have. So use that attention and use that platform that you have been able to build and share it with people who the algorithm is not favoring,” Dalessandro adds.

Then, when speaking with brands or hiring managers, make it an effort to bring up fat people in diversity conversations. Dalessandro keeps a list handy of plus-size, Black, and transgender influencers that brands can consider when she finds a campaign to be lacking on inclusivity. It’s vital to remember that in all body positivity work, Black women should be centered. And not one tokenized Black spokesperson, but an array of people who bring different perspectives to the conversation.

In our digital-first society, allyship can become performative. But for those with the passion to elevate marginalized voices and bodies, the resources have never been so plenty. The opportunity is in your hands. Now, what will you do?